The hairdressing Guru Guy Tang returns in Italy to presents his line #Mydentity!

Hollywood stars acclaim him for his revolutionary nuances of rose-gold, silver, pastel and fluo. He is one of the most eccentric, eclectic and popular hairstylist in the web with 1,448,876 likes in his Facebook page; over 2 million and 300 thousand followers on Instagram; five months ago it has exceeded 2 million subscribers and has an average of 8 million views on his Youtube channel: Guy Tang is the undisputed king of OLAPLEX® hair tutorials! His “brush strokes” have become a MUST in the world of fashion and beauty. This is the way why Guy Tang is called the “GURU” of the hair dressers.

With his “hair transformation” in between of dream and reality, he inspire millions of hairdressers all over the world, he returns in Italy at a distance of just over a year – this time in Milan – for the unique and exclusive event of his “Guy Tang #Mydentity World Tour“. Last year in Rome, more than 700 people from all over Italy and also representatives from Malta, Hungary, Spain, Russia and Asia, attended Guy Tang‘s “show”.

On June 24th at 4pm (for the check-in of the show starting at 3.30pm), at Teatro Nazionale di Milano: this will be the scenario in which Guy Tang will present thanks to the mannequins that will be approached on stage, his newborn color collection #Mydentity. A perfect fit name because as the artist said: “Becoming a hairdresser saved my life”. And they are not just words.

“A collection born from continuous research, the result of the succession of emotions and experiences really experienced by the Asian/American Artist“, underlines Davide Puglia, co-founder with Carlo Oliveri from the Sicilian start-up OP Cosmetics who distributes exclusively OLAPLEX® products for Italy of which Guy Tang is testimonial. “Changing your look – Puglia continues – your haircut and especially color, is often the same as changing your mood“.

“With his disappointments, abuses and bitterness – explains Carlo Oliveri – Guy Tang has shown everyone how he managed, thanks to this extraordinary job, to bring out his talent. His passion, his artistic fantasy and his intellectual freedom have led him to be a true innovative artist of the world hairdressing“.

An event that the two founders of the “Made in Sicily” start up Davide Puglia and Carlo Oliveri managed to replicate after the one in Rome, an example of how nothing is impossible to achieve… for two years they pursued Guy Tang and now he is in Italy! 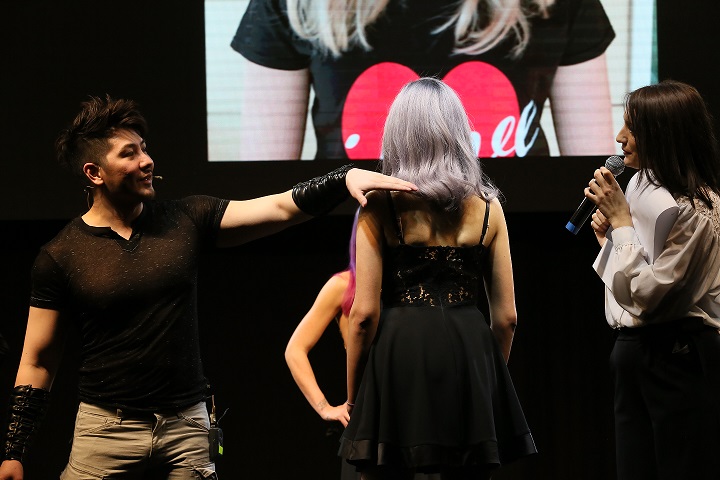