Last September 19, The View hotel in Lugano welcomed the first edition of Excellence Green Night, where the Green Awards were given in recognition of those who have excelled in safeguarding and protecting the environment.

Sustainability implies a constant, hopefully growing environmental, social and economic well-being, aimed to leave future generations with a quality of life not inferior to the current one

As publishers, we’re contributing by committing to support those businesses that best strive for sustainability, both ethically and factually

Sustainability and care for the environment are just a small part of the work done by the MaRHE Center, the Marine Research and High Education Center located in the Maldives, in the Faafu Atoll. MaRHE collaborates with the Government of the Republic of Maldives and strongly relies on the support by Mohamed Nasheed, who was the President of the Republic from 2008 to 2012 and is still considered as the undisputed leader of the country, for his solid values as to environmental sustainability.

Over the night, the University of Milano-Bicocca introduced its new “Luxury and Sustainability” workshop, a premium 10-day education program that will take place in Dubai during EXPO2020.

Closely related to the Excellence Green Awards project, the workshop will be attended by leading luxury brands that have stood out in the field of sustainability.

Much has been done since 1972, when the concept of ‘sustainability’ was introduced at the first UN Conference on the Human Environment. Now, the time has come for new standards. The Maldives are home to luxury resorts that cooperate with the MaRHE Center and have been the first to ditch plastics, turn to zero-mile products and adopt a waste recycling program, for example. This is what we refer to as intelligent luxury

The Acquario di Genova and Costa Edutainment also took part in the Night. The latter has always committed to raise awareness of the importance of a sustainable management of waters. Within its ongoing partnership with the Bicocca University, it will now collaborate with the University itself to a sustainability project to be carried out in the Maldives.

At the Excellence Green Night, the Acquario di Genova set up a contemporary exhibition of glass cases housing jellyfish, for visitors to discover these fascinating, fragile animals.

Winners received prizes created by master glassmaker Fabio Fornasier at the LU MURANO glassworks: true art pieces that were both a reprimand and a hope for the safeguard of the seas. 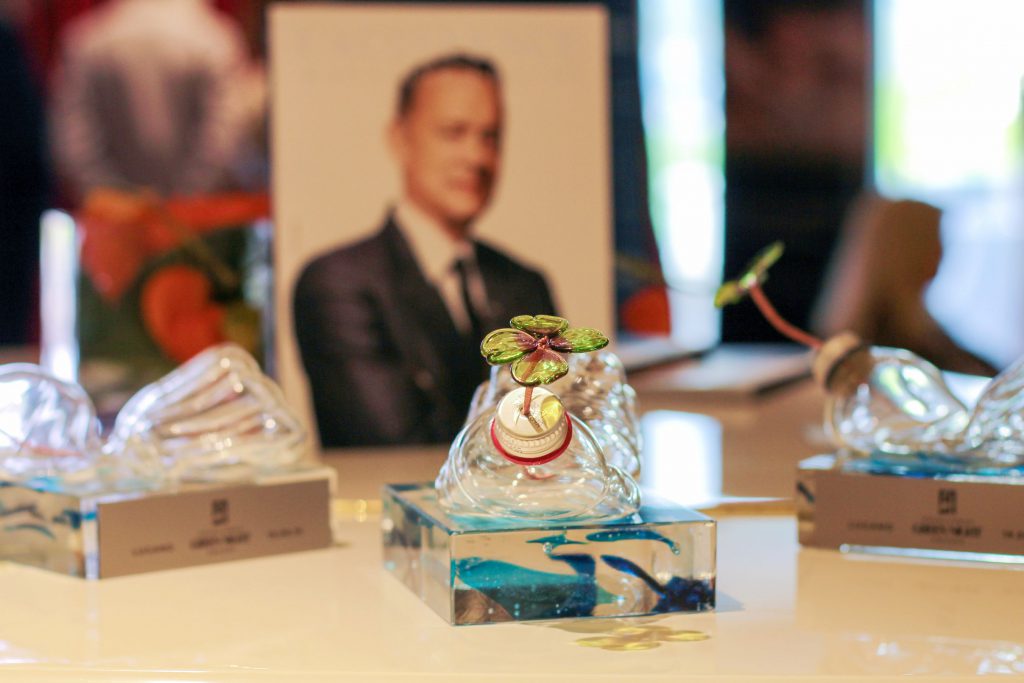 The first Green Award went to the Government of the Maldives, for proving deeply attentive to the environment by launching projects to support the population and promote a low-carbon economy based on renewable energies, in order to preserve the natural environment.

Assigned by professor Paolo Galli from the MaRHE Center, the prize was accepted by Her Excellency Farah Faizal, Ambassador designate of the Maldives to the United Kingdom.

The Planhotel Hospitality Group was recognized for its Maldivian Diamond Resorts and the mindfulness shown in integrating its growth strategy with Sustainable Development Goals especially focusing on waste reduction.

The Green Award was given to the Group President Sara Rosso Cipollini by Cinzia Catalfamo, President of the Akbaraly Foundation in Madagascar and the 4Humannature non-profit organization in Italy, as well as FIFA’s Director of International Education Projects.

A young entrepreneur figured among the Green Night winners too: Helbiz’s founder Salvatore Palella, recognized for rapidly obtaining such extraordinary results and revolutionizing personal transportation while minimizing its environmental impact. He was awarded the prize by Alessia Vanoli, representing Donnavventura.

In addition to the Bicocca University, the Lugano Airport, Banca Zarattini, EcoSwiss,Keller Zable, Vector and Fondi&Sicav, the magazine partnered with premium organizations that agreed to support the Excellence Green Night Awards and share its sustainability projects.