1951 was a magical year for Venice, as the enchanting city was co-protagonist of a global campaign showcasing creations by the most popular tailor of the time, Christian Dior.

On September 3, same year, Palazzo Labia hosted “Le Bal Oriental” thrown by Count Don Carlos de Beistegui y de Yturbe, usually nicknamed “The Ball of the Century” for the remarkable one-thousand jet-set guests who showed up at the event from all around the world. Behind the scenes, Dior worked alongside Salvator Dalì, a young Pierre Cardin, Nina Ricci and many others to create the costumes that the Count’s prestigious acquaintances would wear at the ball.

Both events were silently witnessed by Cameraphoto, an agency founded in Venice in 1946 by photographer Dino Jarach to cover and document those years’ special occasions in and outside Venice.

The agency’s pictures will now reach the public thanks to the joint efforts of Vittorio Pavan, current curator of Cameraphoto’s archive (featuring more than 300 thousand archived negatives), and Daniele Ferrara, general director of Veneto’s museums.

The exhibition will take place at the extraordinary location of Villa Nazionale Pisani, the “queen” of the region’s villas, situated in Stra, near Venice. It is no coincidence that the villa is decorated with beautiful frescoes by painter Giambattista Tiepolo, whose works overlooked the unforgettable ball from the ceilings of Palazzo Labia. 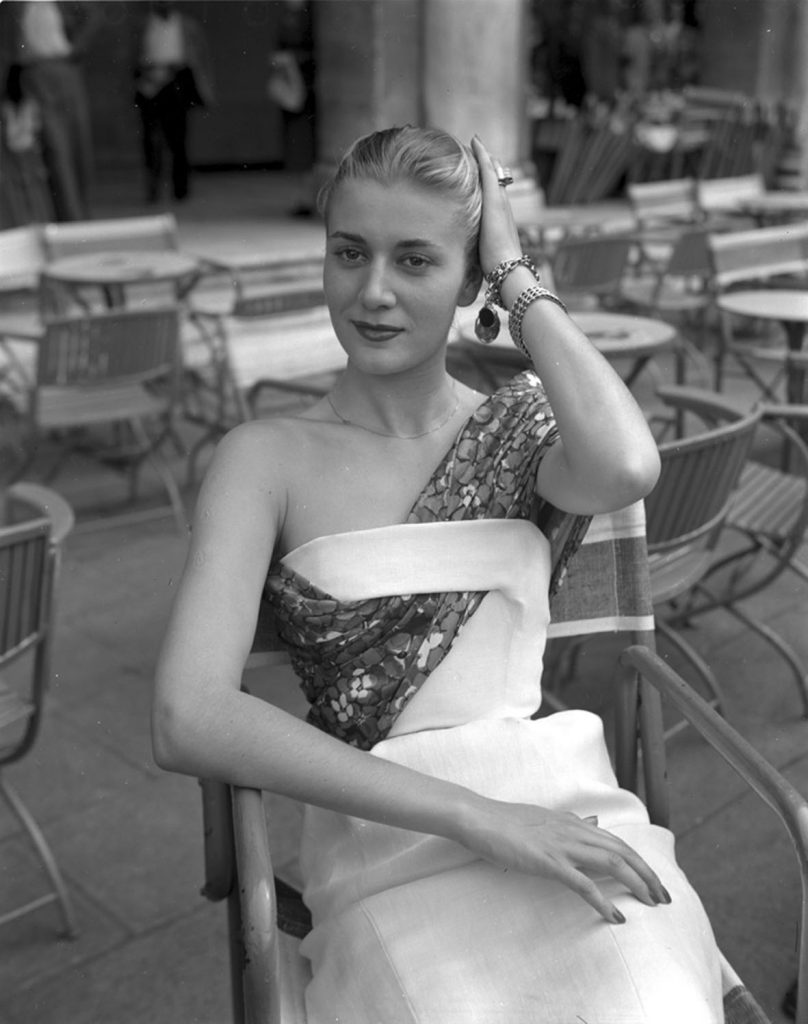 Titled “Intramontabili eleganze. Dior a Venezia nell’archivio Cameraphoto” (“Endless elegance. Dior in Venice through Cameraphoto’s archive”), the exhibition will run from April 12 to November 3, 2019, displaying photos of 40 costumes selected by Vittorio Pavan from the collection that Christian Dior brought to the stage in Venice.

At the time, slightly less than 200 looks would parade at fashion shows, carefully chosen to keep a balance between easy-to-wear pieces and more sophisticated fits. Dior was the guru of post-war fashion, the whole world would impatiently wait and compete for his collections. It is estimated that every year, 25 thousand people would fly across the ocean just to see (and buy) his works. Every twist in his style (one per season, as fashion dictates) would meet both enthusiastic approval and fierce criticism.

In both cases, no woman wishing to be fashionable could ignore the trends set by the Parisian tailor. Only five years after its foundation, his fashion house based in avenue Montaigne already employed over one thousand workers. His New Look would evolve season by season. After introducing the vertical line in 1950, in 1951 he introduced oval designs in women’s fashion, with round shoulders, raglan sleeves and fabrics shaping silhouettes like a second skin.

In Cameraphoto’s archive, Dior’s stunning models dance with Venice and play a duet with the city’s canals, churches and palaces, not just a mere background to the pictures but true protagonists of the great designer’s pieces.

The second part of this fascinating exhibition will focus on the revelry at Palazzo Labia, the greatest social gathering of the century.

On that legendary September 3, high society from every corner of the world headed to Venice. Popularly known as “The Count of Monte Cristo”, don Carlos had sent out invitations to one thousand guests. With the help of Dalì and a number of young tailors, Dior was charged of designing 18th-century-inspired dresses for the guests, as well as for their whippets and other dogs they would often bring along.

Don Carlos received them among dancers and Harlequins, walking around the house on 40-centimetre-high platforms and dominating the party in his Sun King costume. Heir of a huge fortune in Mexico, he lived part in his Paris house, designed by Le Courbusier and decorated by Salvador Dalì, part in a castle in the countryside. Having bought and renovated Palazzo Labia, he decided to open it to his friends.

That night, in the glowing light of the torches, the palace welcomed the Dukes of Windsor, the Grandees of Spain, Aga Khan III, King Farouk of Egypt, Winston Churchill, countless crowned heads of princes and princesses, crowds of billionaires, artists like painter Fabrizio Clerici and illustrator Leonor Fini, fashion designers such as Balenciaga and Elsa Schiapparelli, and elite guests like Barbara Hutton, Diana Cooper, Orson Welles, Daisy Fellowes, the Polignacs, the Rothschild and Cecil Beaton  ̶  her pictures, appeared on Life, made the whole world dream.

The exhibition aims at giving new life to Cameraphoto’s archive, an unvaluable treasure of rare, precious pictures that the Italian Ministry of Cultural Assets and Activities has judged of exceptional cultural value.

The importance of this new awareness of the world of fashion has led one of the most glamorous cities in the world, Venice, to be the background of the first international summit completely focused on sustainable high fashion
Read more
Art & Culture

Stefano Alderuccio who, investigating his family roots, gave voice to a story of men and perfumes, a story of work and passion that led him to found his perfume company VIA DEI MILLE SICILIA in 2011
Read more