There’s something about espadrilles

It ‘s definitely the summer when you start to see around, in various forms and colours, the Espadrilles. The word comes from French language, but dates back to ancient Catalan “espardenya”, a term that indicates the “esparto”, wiry Mediterranean plant used to make the special soles of these shoes.

There are many stories surrounding the origins of espadrilles: somebody date it back to the Middle Ages, somebody linked them to the fishing villages of Spain and Portugal, somebody even to the ancient Romans. The Archaeological museum of Granada owns a pair of espadrilles that were found on human remains inside the “cueva de los murielagos”, around 4000 years old. This light sandal, made with jute rope or braided hemp and with linen fabric, were being worn around the XIII century by the King of Aragons’ infantry men. But the only  certain thing is that all the theories about the famous shoes with soles of jute or hemp are linked to Mauelon, a little town perched on the Pyrenees, which has maintained for years the undisputed monopoly in the production of espadrilles, and thanks to its inhabitants emigrated to Argentina and South America, that espadrilles, under their basque name of “alpargata”, have begun to spread throughout the world.

In the Basque country, in south-western France, the espadrille has been made for generations. At the beginning of the XIX century, Mauléon began selling them in vast quantities. The first people to wear them were the catalano-aragonese military soldiers then subsequently by the priests. Around 1880, most espadrilles were sold to mine workers, but they were also exported to South America. Traditionally, the alpargata was either black or it was left in its natural coloured fabric (the lighter version was worn on Sundays and the darker version during the week), and each region makes the alpargata in its own unique way.

The shoes were hand-made by locals from neighbouring villages and collected door-to-door.  Between 1850 and 1880 the method of production progressed from traditional to pre-industrial. From1880 onwards espadrilles were manufactured in factories using machinery that was adapted over time.   Around the turn of the century espadrille manufacturers enjoyed a period of great prosperity.  The market was driven by demand from the mines of Northern France, where each miner would need a new pair every week.   At the peak there were thirty factories in the Soule region of the French Basque country. There weren’t enough locals to do all the work so the factories recruited seasonal workers from Spain, particularly from Navarre and Aragon, two Basque regions on the Spanish side of the Pyrenees. A flood of seasonal workers arrived on foot between 1890 and 1914. It was the time of the “hirondelles” (the swallows), which were young girls from the aragonese valleys who came to work in the espadrille factories between the fall and winter seasons. ‘the swallows’ arrived in May and left in the Autumn.  The men tended to stay in France after the seasonal work was over because they were able to find work as lumberjacks, quarrymen and general labourers. In Mauleon the numbers of workers making espadrilles increased from 537 in 1896 to 1,585 in 1911. Of these 65–80% were Spanish but there was no resentment towards them because there was plenty of work to go round.  The Spanish population settled principally in two areas of Mauleon, Licharre and Haute-ville and the founders of Megam were amongst them.

Difficulties began to arise for the industry after the First World War.  Conditions in the mines changed. To avoid explosions the mines were kept wet and the rope soles of the espadrilles weren’t suitable. As a result, the espadrille was modified with the addition of a rubber sole. After a black period, suddenly the espadrilles busted as a desirable fashion item: they became fashionable in the USA in the 1940s. Lauren Bacall’s character in the 1948 movie Key Largo wore ankle-laced espadrilles. In the same time they became symbol of the political scene in Argentina of the Peron era labour’s movement.  Around 1950, fashion evolved and this forced alpargata makers to reinvent the shoe with a more sophisticated design that was better suited to the times. This contributed, during the 1960s, to a special order of shoes for the Parisian festivities by the most celebrated designer of the time, Mr. Yves St-Laurent. He asked for an espadrille with a heel, which had never been done before. Suddenly, it was all the rage! Today, almost all the women who live in the southern regions have a pair of espadrilles with heels and ribbons that tie around the ankle.  In the 80s, the fashion was revived as a result of the success of the U.S. television series “Miami Vice”, where Sonny (Don Johnson) and Rico (Philip Michael Thomas) appear wearing them.

Comfortable, practical, colourful, suitable for any outfit, they are forcefully returned to the fashion scene, already the last season becoming a must to obtain the final consecration to the Pitti 82, which is taking place these days … As a “must have”, it continues to be the subject of review and reworking by Big Fashion Maisons as Chanel and Marc Jacobs, Christian Louboutin and Miuccia Prada and many others. From the Hollywood stars to fashion victims, Espadrilles are gracing the feet of everyone.

Today, espadrilles are still extremely popular both in France and in Spain, especially in the summer. People seemed to like it because of the sole, which is 100% natural, molds itself to the shape of the foot, and allows the skin to breathe. The simplicity of this shoe makes very versatile and therefore easy to match with all sorts of different styles.
Today Mauleon is still the hub of the espadrille industry. Although reduced in size since its heyday, it continues to meet a now growing demand for a high quality product from a more exacting customer. The soles of espadrilles may be flat, platform, or wedge shaped made of natural fibre. Uppers may be made from nearly any substance and may have open or closed toes, open or closed backs, and can be slip-on or tied to the ankle with laces. Thousands of varieties of espadrilles can be found, from inexpensive bargain brands to high priced designer brands.

An espadrille shop, featuring an espadrille museum, is located in the little town of Osses, some 43km south east of Biarritz. A great achievement that tell you the history of the espadrilles with exhibition of the manufacturing devices, of the 18th century, when the espadrille is made at home until today, through the years 1900, “les temps modernes” with the emergence of manufacturers and the arrival of the “hirondelles” these young people who cross the mountains to cross the border and come to work in Mauléon. Of course with the sale of espadrilles, espadrilles, from the most classic to the most contemporary ones, made of silk, leather, classic, elegant, with wedge heels for the ladies… A great success and ultimately, the Entreprise du Patrimoine Vivant (EPV) label, rewarding efficient artisanal or industrial companies participating in the economic and cultural influence of France. A reference for consumers, guests and prescribers, and the guarantee of a rare and exceptional know-how. The place is open between March 15th and October 15th. 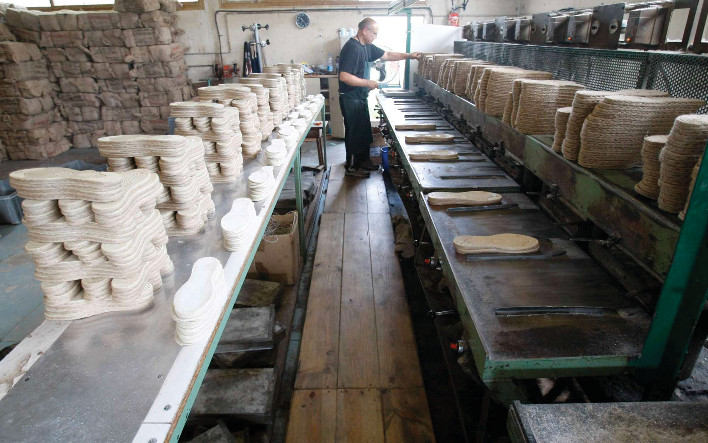