Another preview for Sugar is one of the ten most elegant clothing stores in Italy according to the specialized newspaper rankings, but now more than a showcase parade is a real fashion palace, an atelier that would make a great impression in via Montenapoleone or in another of the great streets of luxury pret-a-porter.

Beppe Angiolini, has managed to bring to the end his mega-project of merchant, stylist (draws lines for Scervino) and influencer among the most quoted in the golden world of fashion: transform Lambardi Palace, ancient aristocratic residence of Arezzo located in front of the old windows of Sugar, in a temple of elegance, masculine and feminine in the round, with luxury relais on the top floor. The opening, coinciding with the Antiquaria, even if the official opening is scheduled for September 13th. 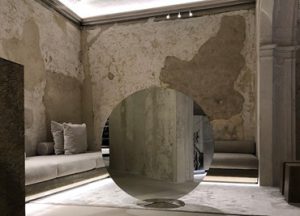 The entrance of Sugar is that of the historic Palazzo Lambardi, whose gallery leads into an open atrium, which can also be accessed from the side windows that open next to the main door. On one side, on the left, women’s clothing, on the other, on the right, the male one.  Not only on the ground floor but also on the first floor, which is the noble one with the main rooms. “We left them as they were – explains Angiolini – I like the contrast between the hypermodern layout and the ancient walls“.  Many of them, incidentally, are frescoed or otherwise decorated. In a corner there is a fireplace of Vasari style, on the other, closed by a door that protects it, a small fresco (a Madonna) by Spinello, one of the great painters of the Arezzo school. Without forgetting the piece on the ground floor, that is the Roman mosaic (it belonged to an imperial Domus) rediscovered in 2007 during the first renovation works. There will be a kind of living room in which customers will be able to stay. Next to the bar, at the back of the garden. “My idea – explains Beppe – was to show the solidity of our roots in Arezzo in the era in which the online gives the figure of a global world“. On the top floor the relais: 12 rooms with level equipment, between four and five stars. All in the sign of glamor elegance.