Universal values and symbols are handed down through the centuries in the goldsmith’s art – jewelry has always been  ornamentation, an emblem of power and a bond.

Giulio Manfredi, the creative genius behind the company he founded in 1973, is reclaiming artisanal craftsmanship, absorbing these traditional values, moving beyond the norm, and seeking new content in his stylistic analysis. His is a creative freedom capable of moving beyond the confines of matter and celebrating natural gems with vivid pairings and unusual cuts. It’s almost a refusal of the passive acceptance of rules, exploring a new dimension of jewelry and how to experience it. For Manfredi, pieces of jewelry are artistic expressions that tell the stories of the people who made them and the people who wear them. 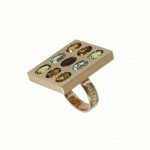 He uses precious alloys to create fluid and harmonious new shapes; he plays with glints off the gold, using all its color variations to reflect and elevate the true star of his jewelry: light.

He also created jewelry-sculptures for the ‘L’ emozione del sogno, Giulio Manfredi interpreta Alessandro Manzoni’ (‘The thrill of dreams – Giulio Manfredi interprets Alessandro Manzoni’) exhibition inaugurated in 2006 in the display rooms at Casa Manzoni. That creative project led him to re-explore the literary masterpiece from a contemporary angle with seven creations that describe the characters in ‘I Promessi Sposi’ (‘The Betrothed’).Thus Lucia’s Raggiera hair ornament retraces the history of this wedding piece with the value of a promise honored with patient endurance, and brings it to life with topazes, lilac quartz, and garnets. Also in Milan, in 2011 he was star of ‘L’ Oro invisibile’ (‘Invisible Gold’) with a collection dedicated to Da Vinci’s The Last Supper, displayed at the Cenacolo Vinciano Museum and the Braidense National Library. ‘Arte indossabile’ (‘Wearable art’) opened its doors to the public last February; the concept grew out of a meeting with award-winning chef Stefan Pramstrahler. It is a journey that begins at the foundations of the Turm and then climbs toward the Torre del Gufo through the ancient XIII century walls with the ‘Volo di Cento Farfalle’ (‘Flight of One Hundred Butterflies’) illuminating the rock. Rose gold and white silver, enamel, flame, and the iridescent colors of the stones reveal themselves in a swarm of light and reflections. Finally, the crystal outlines with their decisive geometry that preserve the transparency of the material in the pure elegance of form lead to a panoramic view from the terrace over the Schlern. It is a play with material that rediscovers dimensions and properties that have been forgotten over time.