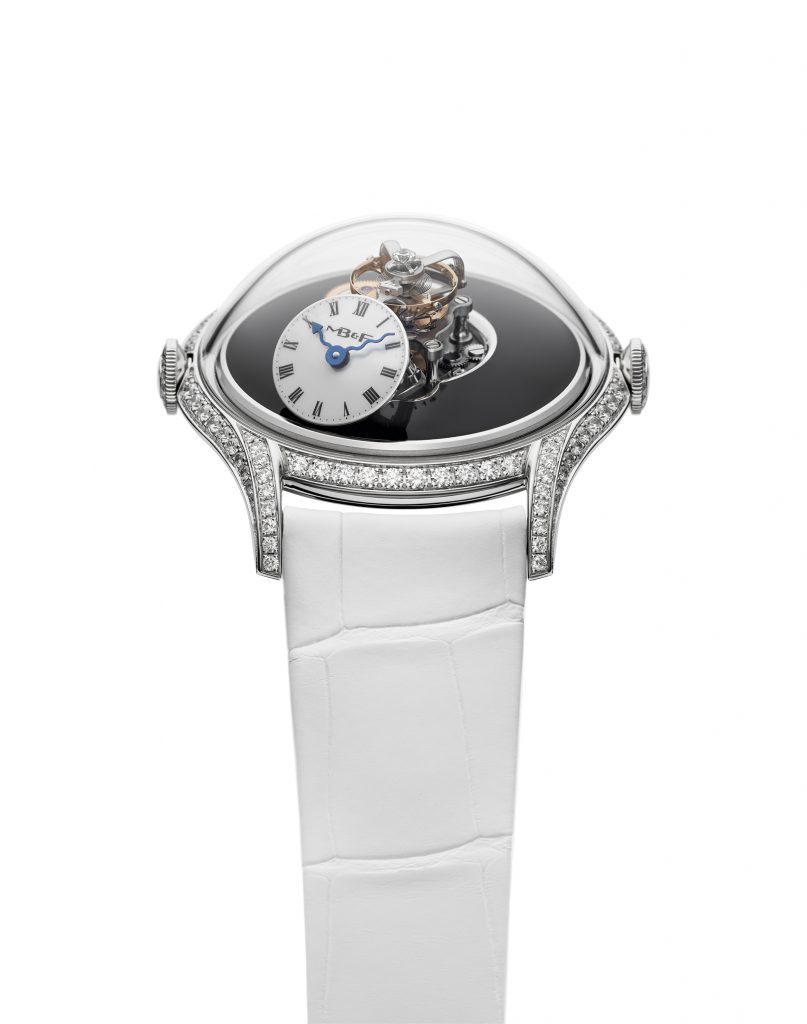 Now in its 14th year of creating collaborative works of audacious horological art for the wrist – and sometimes for the tabletop – MB&F has finally created a timepiece dedicated exclusively to women. The Legacy Machine FlyingT is a three-dimensional creation, with a steeply cambered bezel and slender, beveled lugs on a round case that is fully set with diamonds. The high, convex domed sapphire crystal hovers over a curved dial plate. An asymmetric opening frames a raised flying tourbillon escapement, the carriage of which is topped by a single large diamond. A dial of white or black lacquer with blued gold hands sits on a 50° tilt at the 7 o’clock position. The watch is set with either round-brilliant or baguette diamonds. 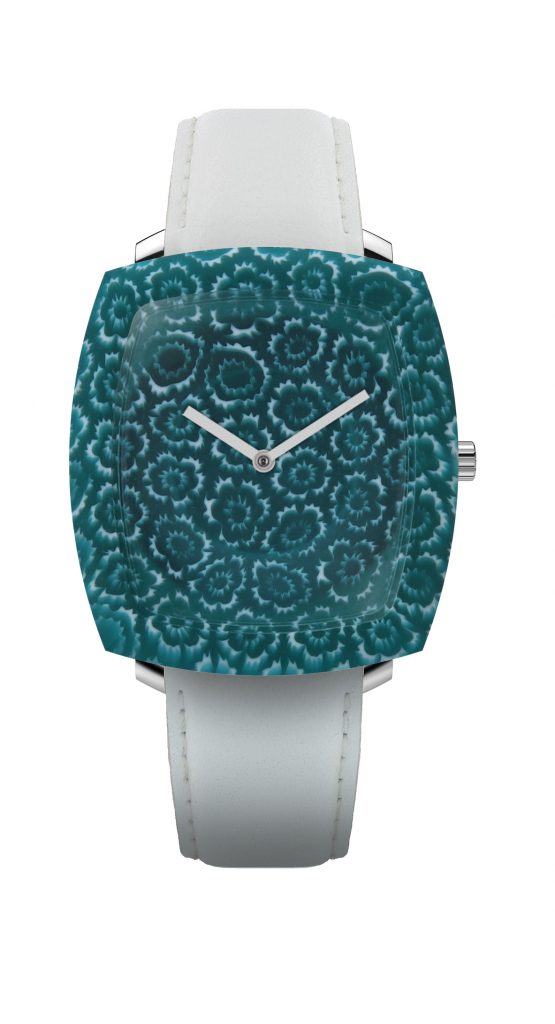 With 22 collections, in various colours, sizes and shapes, YUNIK has an option for anyone looking for a watch that is unusual enough to express their individuality. The three models in the Bora Bora collection, with cases made from Murano glass, stand out as unique in today’s world of timepieces. The cases are made entirely of Murano glass, created by artisans on the Venetian island of Murano since the 13th century. They are made in the millefiori (“a thousand flowers”) style, crafted by applying successive layers of crystal to enamel to reveal the colour, these canes resemble barley sugar candy canes. Each Bora Bora case is therefore unique. There are three references, including two case shapes and a choice of quartz or automatic movements 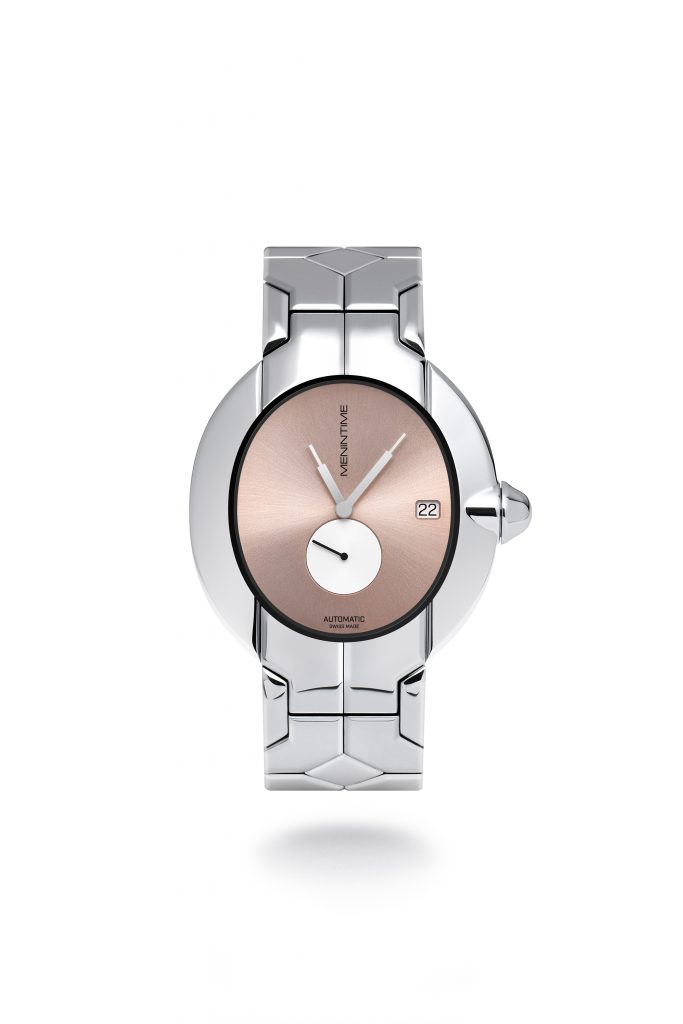 MENINTIME, a new Swiss watch brand created by award-winning designer Vincent Rouillard, makes its debut with Le Paon collection in the Les Ateliers section at Baselworld. The watch is being offered in ten different references, with case and bracelet options of bead-blasted matte, satin-brushed or hand-polished surfaces in any combination, as well as eight dial layout options in a choice of nine different colours. The three-part case of Le Paon (the Peacock) is neither completely round nor completely oval, but somewhere in between, measuring 38 mm x 37.3 mm. The stainless steel case is perfectly integrated with the remarkable bracelet, composed of 55 individually cut and assembled links. The movement is the automatic ETA calibre 2895-2, with hours, minutes, date and small second. 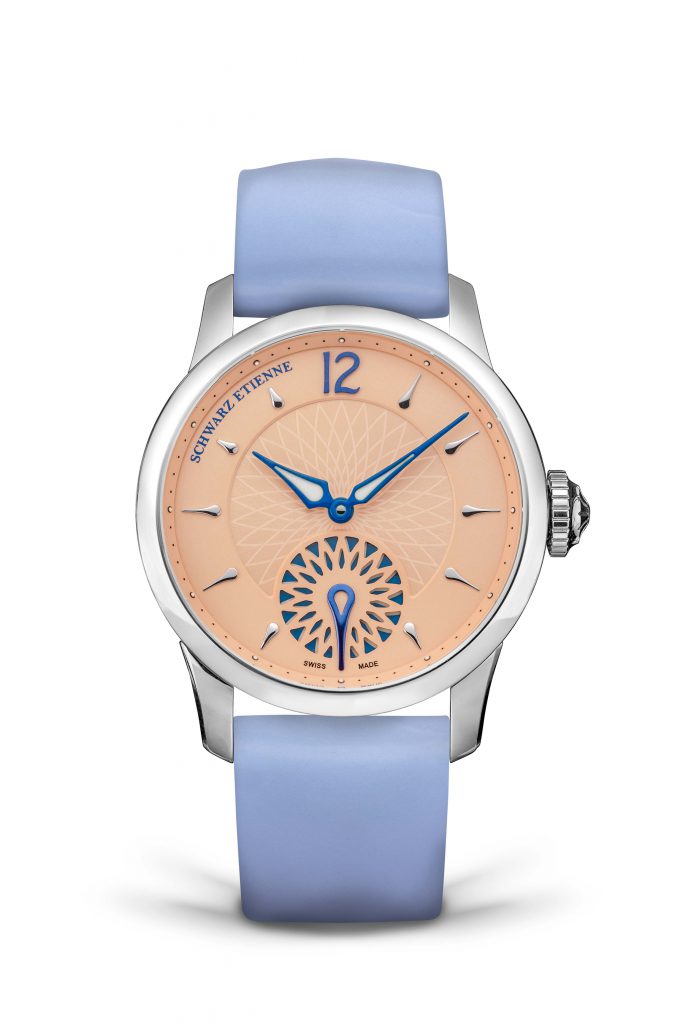 SCHWARZ ETIENNE’s inaugural ladies’ watch is deliberate departure from the concept of adapting a men’s design to ladies’ proportions. The dial is animated by a small seconds subdial at 6 o’clock designed as an openworked lattice that rests above a rotating disc. It is a subtle acknowledgement that women are as interested in the mechanics of a timepiece as they are in its aesthetics. The Fiji Floral seconds contains an automatic caliber with a remarkable 86-hour power reserve. It is decorated with a sunray pattern on the bridges and a guilloché motif on the balance bridge. The 38 mm case is stainless steel, constructed in three parts, including bezel, caseband and caseback, forming a capsule that is mounted with a separate cradle that incorporates the lugs. Dial colours include black or pale salmon, with drop shaped indexes and an Arabic numeral at 12 o’clock. The large crown is topped by a 0.02 carat diamond. 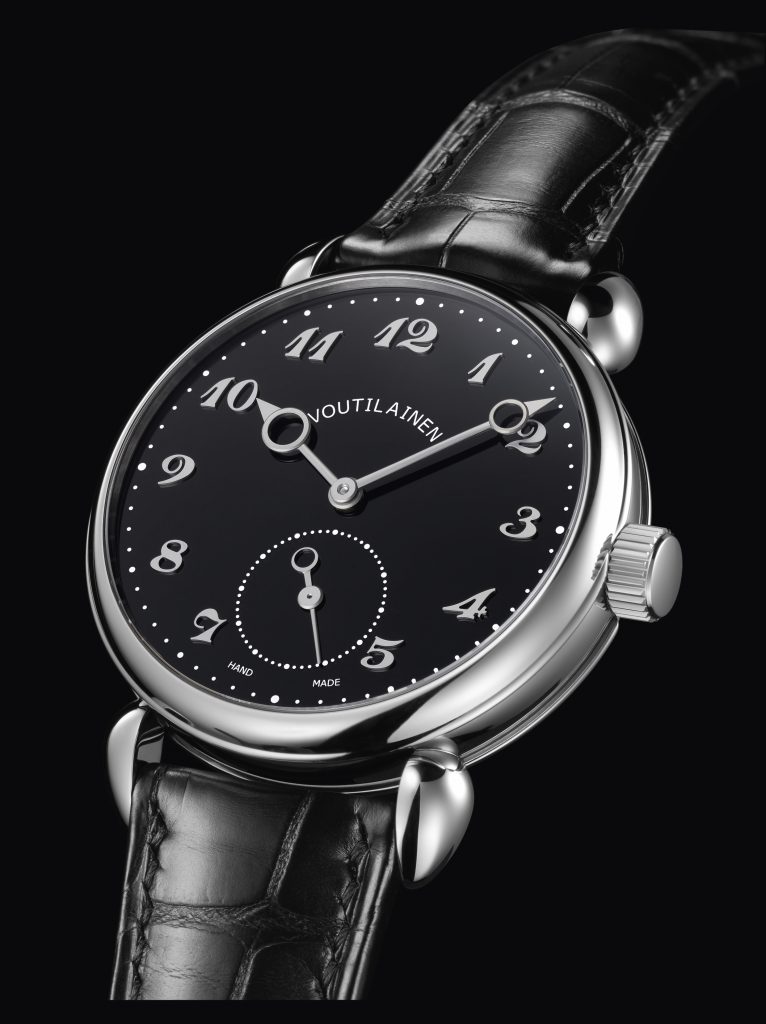 Kari Voutilainen’s philosophy of watchmaking is to combine respect for longevity and precision with classical watchmaking tradition. The VOUTILAINEN 28E, made entirely in the VOUTILAINEN workshops – including case, dial, movement and all finishing – perfectly epitomizes this credo. The movement is unique, with a very large balance wheel and a balance spring that uses a typical Phillips overcoil on the exterior and the little-known Grossmann curve on the internal curve. There are two synchronized escapement wheels, which give a direct impulse to the balance through the impulse roller, a system that uses less energy and has greater stability than traditional lever escapements. The movement is finished by hand, and the dial is grand feu enamel over gold, with stylized Arabic numerals and large pomme-style hands 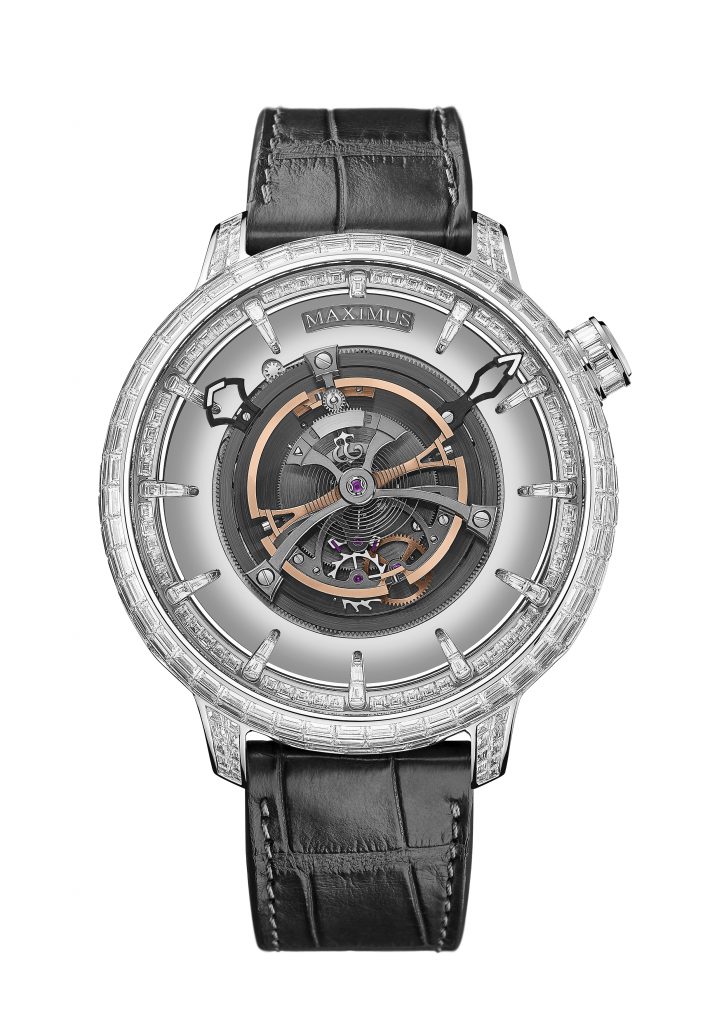 This dazzling jewellery version of the Maximus Royal, the world’s largest tourbillon, is now completely set with diamonds. This creation contains 453 invisibly-set baguette-cut diamonds totalling 18.47 carats. It is part of a 14-piece edition of made-to-order jewellery versions of the Maximus Royal Tourbillon that will be set with gems, including emerald, jade, ruby and aventurine. The movement is a marvel of precision, with an astounding 27 mm tourbillon carriage made of 73 components that rotates once every 6 minutes instead of the conventional 60 seconds. In addition to the accuracy ensured by the tourbillon itself, an 18k gold flyweight was added to fine-tune the balance of the cage. The use of titanium keeps the tourbillon cage lightweight, ensuring that despite its size, it can rotate without losing precision. A fixed balance-spring stud prevents any changes in position due to shocks, further ensuring precision, and the balance wheel can be finely adjusted.