In October, the reopening to tourism, after entering the Guinnes World Record

A region roughly the size of Lombardy, located north of Medina; a journey through time up to the Bronze Age, a leap into the desert void, a hot air balloon flight. Finally in October 2020, Saudi Arabia will reopen the region of AlUla to international tourism, an archaeological treasure that hosts several UNESCO World Heritage sites. A crossroads area of ​​peoples since prehistoric times, which has seen different civilizations, each of which has left a trace of its passage. 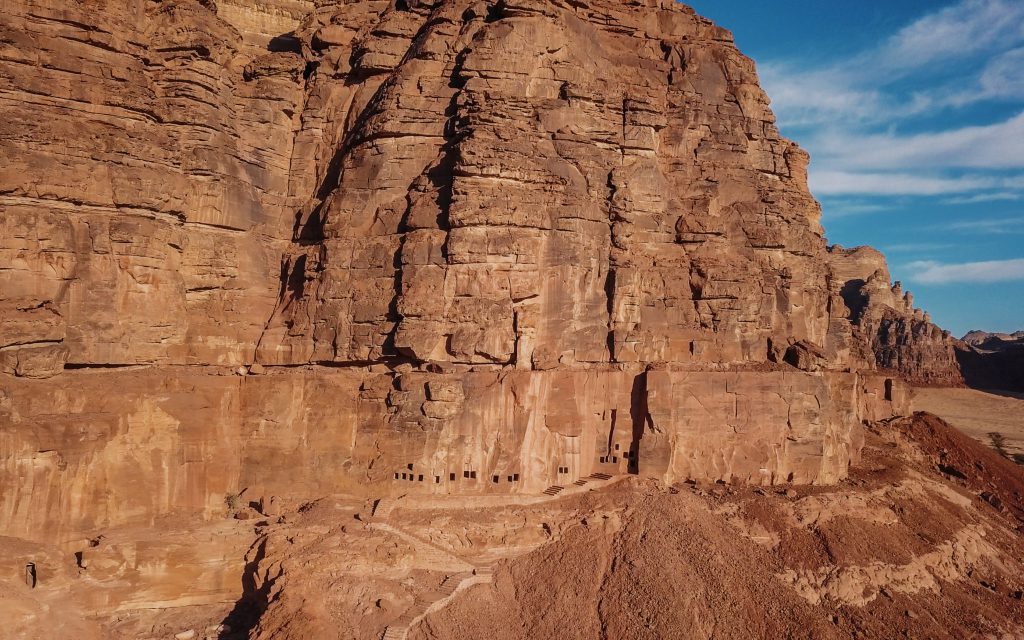 An oasis of peace where to find refreshment and rest, AlUla has represented for centuries a vital crossroads along the routes of exchange of incense, myrrh and other raw materials that came from southern Arabia, heading north to Egypt and beyond. Hegra, the first UNESCO World Heritage Site, offers hundreds of funeral monuments made by carving huge blocks of sandstone to an incredulous spectator. They date back to the Nabataean period, around the 1st century BC, during which the city played a prominent role. Then, historians say, it represented for a long time the southernmost outpost of the Roman Empire. 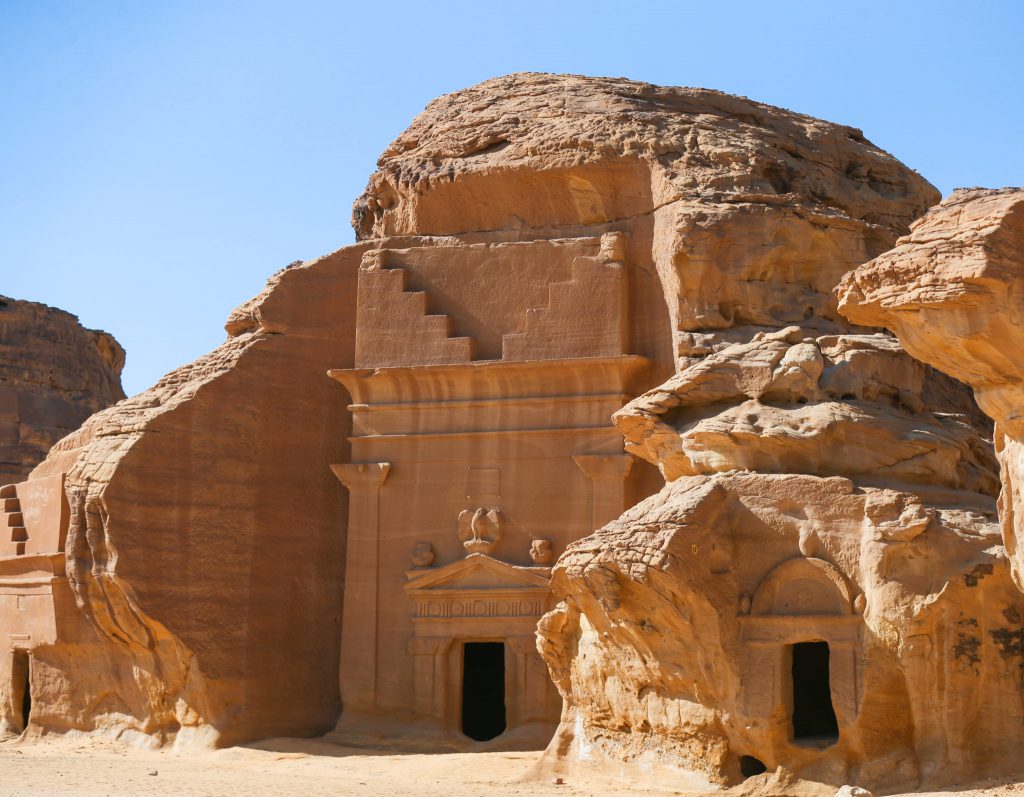 Al-Khuraybah, ancient Dadan, is a city built in stone and considered one of the most developed of the first millennium BC on the Arabian Peninsula; it owed its prosperity to the role of crossroads of long distance incense trade. Archaeological excavations have brought to light colossal sculptures of human figures, which were probably inside a temple, a symbol of ancient splendor that can still make us feel infinitely small today.

The AlUla sites represent a lot of open-air Babel, in which the most disparate languages ​​met – Aramaic, Minaic, Nabatean, Arabic and Latin – which left hundreds of inscriptions and epigraphs destined to last for centuries. When Islam was founded in the seventh century AD, the oasis valley became an ideal resting place along the pilgrimage route to Mecca. For this purpose, the AlUla area was also crossed by a railway that went from Damascus to Medina, extending for more than 1300 km. AlUla station was significant because it was the last stop for Christian workers, who were not allowed to continue their journey to Mecca. 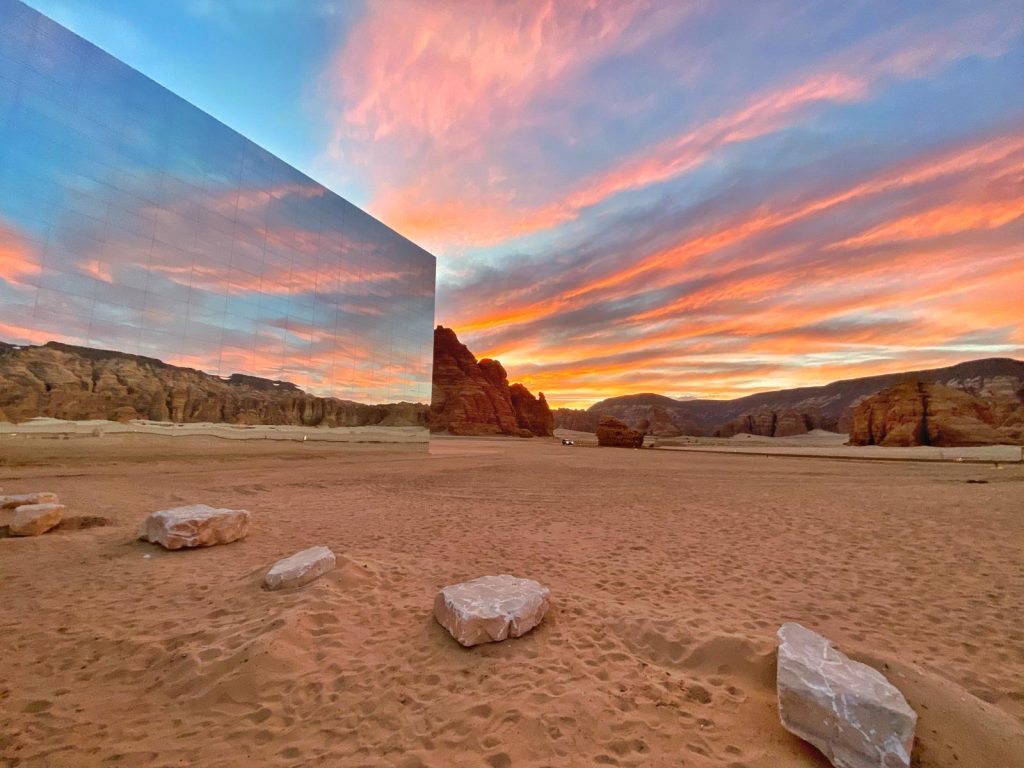 But that’s not all: nature – combined with the ignorance of the human being – can give us unthinkable shows. Breathtaking sunsets observed by a hot air balloon, an excursion on horseback through the desert dunes or a concert immersed in the silence of sand and rock. In fact, the Maraya Concert Hall arose in this uncontaminated space , a gigantic cube made of mirrors that integrates perfectly into the surrounding landscape, reflecting it in an infinite game of breathtaking perspectives. 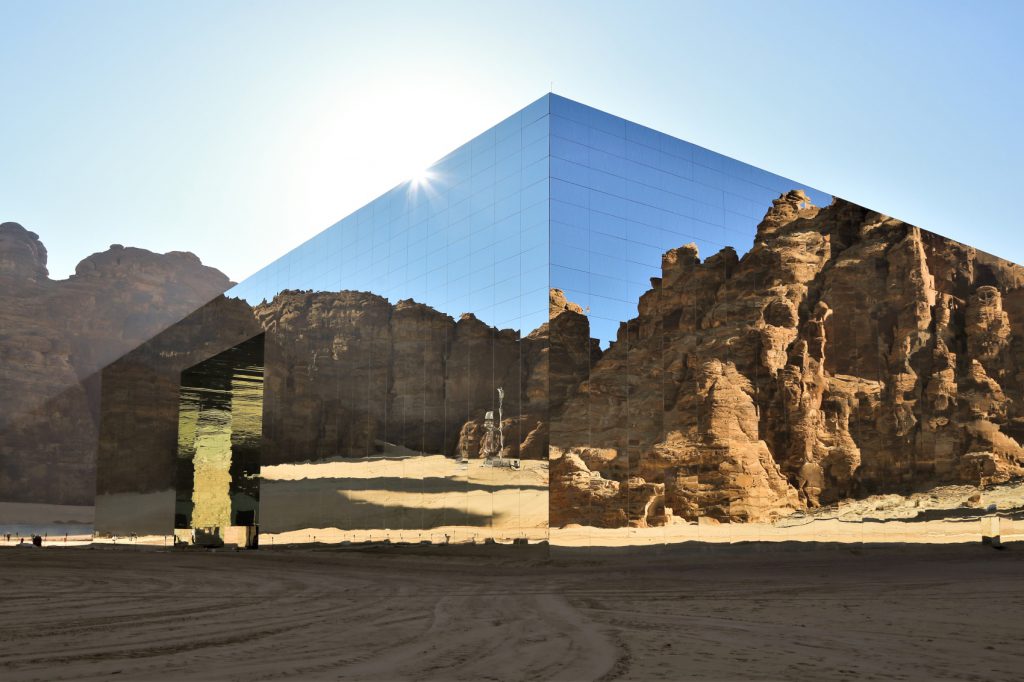 After hosting the likes of Andre Bocelli, the Maraya Concert Hall has entered the Guinness World Records ™ to be the largest mirror building in the world. The word “Maraya” in Arabic means a mirror and the building, not surprisingly, has received the nickname “reflected wonder”.

A unique experience of its kind and – we can say it –  once in a lifetime . AlUla thus becomes the last frontier of the exclusive holiday, equipped with every comfort but which allows at the same time to immerse yourself totally in nature and history. The vision of the Royal Commission for AlUla is precisely this: to develop all the potential of a dream tourist destination without upsetting the environment, but rather enhancing it and involving those who have lived in it for thousands of years.