Mix together a luxurious period building, Palazzo Pisani Moretta, which overlooks the world’s most famous canal, the Canal Grande, an elegant and tireless lady of the house, Antonia Sautter, and a desire to step outside the confines of reality. 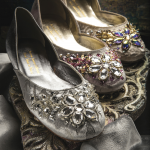 This magic potion is called ‘Il Ballo del Doge’ (‘The Doge’s Ball’), the masquerade ball that the press calls one of the ten things that must  absolutely be on your lifetime bucket list. Last February it opened the festivities for Venetian Carnival with the theme: The Best of … il Ballo del Doge. A ban on tuxedos, watches, and luxury cars: the dress code called strictly for period costume, and access to the Palazzo was permitted only by gondola, directly from the sea. The peal of a trumpet welcomed guests, swathed in precious silks, pearls, rich velvets, and ornate macrame. Draped in the fabrics of kings and queens of days gone by, their feet trod in antique shoes, guests stepped onto the pier and moved oward the entrance, heads covered with impressive lily white wigs in the purest Venetian style, and masks concealing nd confusing faces, floating between illusion and reality. 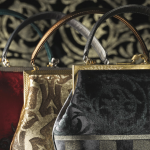 Reaching the threshold of the building, the view was kaleidoscopic: plays of light and fire, gallant bows and curtseys, jugglers, ushers. Once inside, there was only room for astonishment in the face of a world saturated in magic. Antonia Sautter is the brains behind the idea, creating the scenery and costumes and directing the event. Even the smallest details bore the unmistakable seal of her elegant and sophisticated taste, and every symbol o  f Venetian tradition, each in its turn, was revisited from an innovative perspective, transforming into distinctive figures of ‘Il Ballo del Doge’. An aristocrat and merchant, German blood from her mother and Venetian from her father, Antonia loves to create and invent new stunts that for more than twenty years have made her a prominent entrepreneur and an international spokesperson for her love of beauty and Venetian taste. Even in her speech, which dances fluently in step with her imagination, one can’t help but grasp how deeply the world of imagination for her is woven into reality, and it is enchanting to let yourself be bewitched by the grace of her regal welcome and obsessively arranged improvisation. When she was only 23, Antonia Sautter’s entrepreneurial spirit emerged with Antonia Sautter Creations & Events, creating events around the world, both in society and for corporate clients.

“What sets your creative style apart?” we asked her.

“It’s hard to describe your own style – it’s a bit like talking about your own character. I think it’s up to others to define it rather than me. What I can say is that I have always chased my dreams and worked with a lot of passion, tenacity, and commitment to bring them to life, reinterpreting and renewing tradition. Since childhood, imagination has been the main thread through my life, and that of my mother. I share with her a love for costume and for the characters I’d play during Carnival. Her deftness, good taste, and dedication to personalizing anything quickly showed me how thrilling it is not to conform to standards, seizing the satisfyingly unique chance to express yourself. That is the greatest legacy that my mother left me. If ‘Il Ballo del Doge’ is my personal expression, the events that I stage for my clients are theirs. It’s my job to provide a concrete angle for interpreting their dreams.”

“In 1994 ‘Il Ballo del Doge’ debuted its dances and hasn’t stopped since. What was the genesis of your creation?”

“Nothing is created by chance. When you want something so powerfully, you attract it until it comes to you. That’s how it was between me and ‘Il Ballo del Doge’. In 1993, Terry Jones from Monty Python walked into my mask shop. He was writing a program for the BBC on the Fourth Crusade. He already had clear ideas on the climactic moment: a huge party in which the gondolas would be transformed into galleons. That would be the meeting point for the main characters – Doge Enrico Dandolo, knights, and courtesans. He needed a consultant and asked me to recommend someone. I had never planned an event before, but I felt able to do it, so I put myself up for the job with a healthy dose of recklessness, and I brought in all my friends as extras. Only one thing was non-negotiable: the name of the event, which the BBC had already decided. With ‘Il Ballo del Doge’, I live the thrill of my dream, and above all I share it with my friends and guests, for whom I announce a new theme each year: ‘Dining with Casanova’, or ‘Seven dreams for seven sins’, for which I staged a theatrical production and new scenery, one reason that it’s a set event for many people.”

“In 2012, Antonia Sautter, you received the award for ‘Venetian Woman of the Year’ and the title of ‘Knight of the Republic’, confirming you as a global ambassador of Made in Italy. Which people abroad do you work with the most?”

“There are dreamers everywhere, so why limit yourself to focusing on a just few countries instead of others? I could mention Turkey, Russia, and the United States, but that would only give a partial picture, so I don’t think it makes sense to do that. I’d like for ‘Il Ballo del Doge’ to become an event that travels around the world, and not only during Carnival, as if it were an occurrence outside both time and space, just like dreams. And because I want it, I know that I’m already attracting the chance for all this to become reality.”

“The prestigious Atelier beats in the very heart of Venice, just steps from Piazza San Marco. Which of your creations are on display?”

“Costumes give me my chance to express myself, and more than anything to experience all the characters I’m passionate about. I have more than 1,500 costumes at the atelier, but I have many more, unfortunately crammed into warehouses. I have some from every era, from the Renaissance to Romanticism, and naturally from the 1700s, the century that enchants me more than any other for the theatricality of its dress. Thanks to my partners and associates, I dye silks and velvets by hand, not only for clothing but also for cushions, tapestries, and coverlets, and sometimes I work alongside interior designers to embellish homes.”

“Let’s play a game. If Antonia Sautter were one of her own creations, which one would she be?”

“I am thrilled by every new creation, without exception. I can’t identify with one over another. If I had to choose, I’d probably go for the collection of queens’ clothing that I have in the atelier, including those of Caterina Cornaro, Marie Antoinette, Elizabeth I, Maria Theresa of Austria, Cleopatra, and Salomè. These are examples of women of great wisdom, and I couldn’t help but be passionate about their stories: powerful figures who were able to make history in a time when men did that, and when women were unjustly handed down to posterity as frivolous people. But clearly they were anything but.”