Thanks to Gattinoni, Oman succumbs to the charm of the Made in Italy cachet

In 1946, when Fernanda Gattinoni founded her eponymous fashion house in Rome, she chose a strategic location close to the Hotel Excelsior. In this way, the stylist got to know and dress some illustrious celebrities such as the American Ambassador Clare Boothe Luce,  Evita Perón, as well as the actresses Ingrid Bergman, Anna Magnani, Audrey Hepburn, Silvana Pampanini, Lana Turner and Kim Novak. 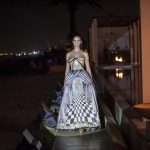 The scintillating world of fashion and cinema that led Rome to become a sort of newly fledged Hollywood in the fifties, relives in the splendid exhibition entitled “Fernanda Gattinoni. Moda e Stelle ai Tempi della Hollywood sul Tevere” (Fernanda Gattinoni. Fashion and Stars in the Days of Hollywood on the Tiber) curated by Stefano Dominella, Chairman of the Maison. The exhibition is further enhanced by the collateral photographic exhibition, “Roma è di Moda” (Rome is Fashion) which, through the work of photographer Paolo Belletti and the styling of Lucia de Grimani, accompanies the visitor on an imaginative walk around town to discover some of the most remarkable and exquisite architectural wonders of the eternal city, so closely associated with fashion.

This original event was held last March in the Sultanate Royal Opera House of Mascate under the patronage of HRH Sayyida Dr. Mona bint Fahad Al Said and under the aegis of Her Excellency Paola Amadei, Italian Ambassador in Mascate. 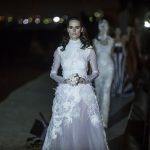 To mark the event, Gattinoni stylist Guglielmo Mariotto has created a dress called “Homage to Oman” and offered it as a gift to the State of Oman; it is designed similarly to a kaftan, leaving hands, face and feet uncovered, according to the teachings of the Koran.

Proud of the success obtained by the double event, Stefano Dominella declared: “We are honoured to be in Oman, a land rich in culture and tradition, with two events long awaited by the institutions, buyers and local press. It is the charm of our history, entwined with quality craftsmanship and the typically Italian taste for beautiful things that has brought us here to Oman, a country ready to take on new challenges and adopt new attitudes, also in terms of trade.”

Oman’s economy has expanded constantly since the seventies and although the Made in Italy cachet is only associated at present with haute couture and tailor made garments for the exclusive use of members of the aristocracy, the welcome extended to the prestigious Maison Gattinoni – symbol of the Made in Italy label the world has learnt to love – is by no means devoid of significance.