November 25 is the International Day for the Elimination of Violence Against Women, which was introduced in 1999 by the United Nations General Assembly as an invitation to governments, international organizations and NGOs to hold events on this date aiming to raise awareness of one of the most devastating and still widespread violations of human rights.

Many initiatives are launched every year, and we would like to introduce our readers to a project called Il luogo più pericoloso (“the most dangerous place”), by Silvia Levenson and Natalia Saurin.

We meet Silvia Levenson to find out more about the creation of Il luogo più pericoloso.

Silvia, how was this project born?

Natalia and I explored issues like gender-based and domestic violence from various perspectives. In our research, we read several reports, including one from 2018 by the United Nations stressing that “the most dangerous place for women and girls worldwide is the home”, and numbers are appalling: about 50,000 women and girls fall victim to gender-related killings every year.

This is why we thought of linking domestic spaces (through kitchen plates) to the words and phrases used in the media to make reference to this kind of violence and the gruesome clichés existing in our society. We are talking about a war that happens before our eyes, and no uniforms or military strategies are involved. 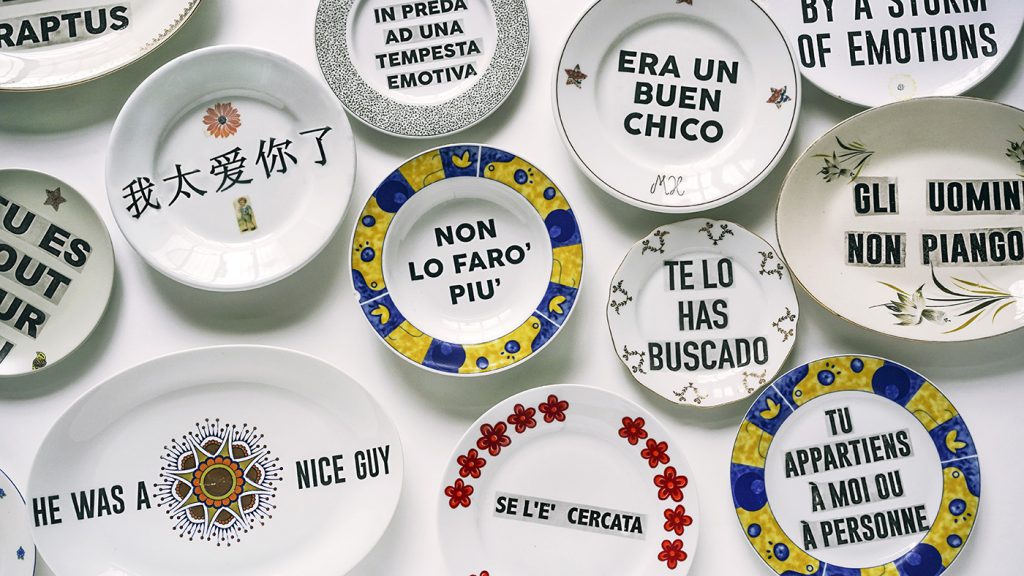 We created decals of these words and phrases for ceramics, then cooked them in ceramic furnaces to make 120 plates representing all the women who died to femicide in Italy in 2018, as we believed in doing something together that could resonate not just with the world of art, but with society too.

A mother and daughter together for an important project. What is your relationship like?

My relationship with Natalia goes beyond family bonds; we’re mother and daughter, but we also highly respect each other and closely collaborate as artists.
We represent two different generations, and we’re used to discussing and exchanging opinions about art as peers. 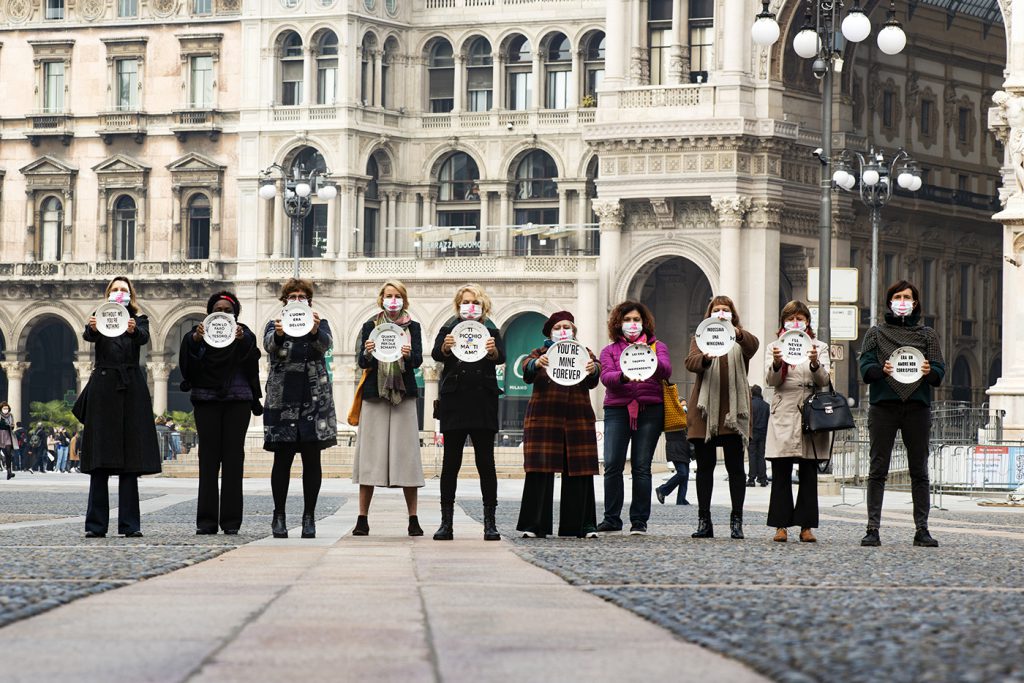 On November 25, your installation should have gone on show in the courtyard of Palazzo Reale in Milan, curated by Antonella Mazza, as part of the 2020 edition of the program “I Talenti delle Donne” (“women’s talents”). The event will not be held because of the emergency health restrictions in place, but the artists and the curator, determined to speak up about the violence against women during the lockdown, turned their work into actions happening between Palazzo Reale and Piazza Duomo.

What came of it is a series of photographs showing the women behind this work, with faces covered by the masks that Silvia Levenson has designed for #sinergie with her symbol of dangerous love: a mask to voice the gagged women of the association “Non sei sola. Uscire dal silenzio. Contro la violenza” from Biella. 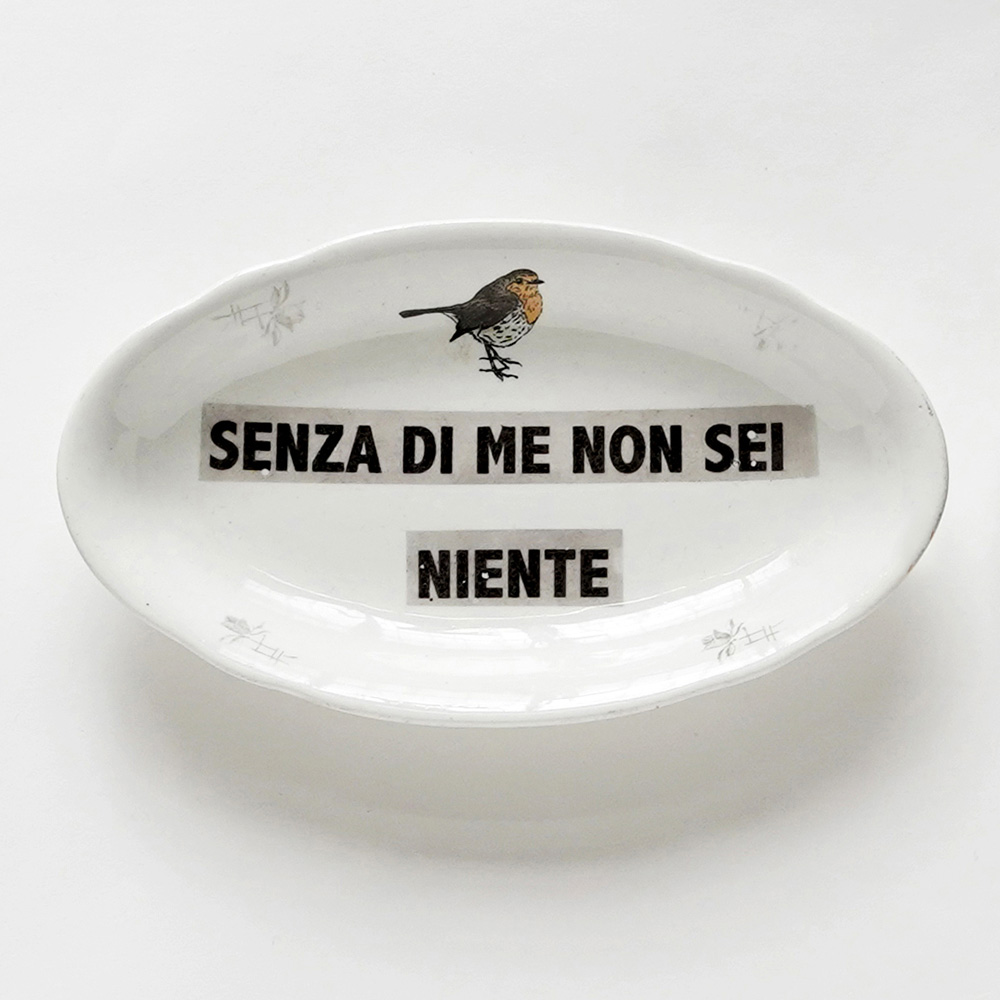 What is your goal?

We intend to make this humanitarian emergency known, and to highlight the misrepresented, misogynous communication of violence in the news, where victim-shaming causes an extremely dangerous cultural misunderstanding that is old but still common and topical today.

Marco Del Comune’s photos show Natalia and me with other women and their plates. “Il luogo più pericoloso” is made of everyday-use ceramic plates decorated with words and phrases heard in the media to underplay news about violence, or used by violent people to justify their actions – the proof of a war that too often happens at home. 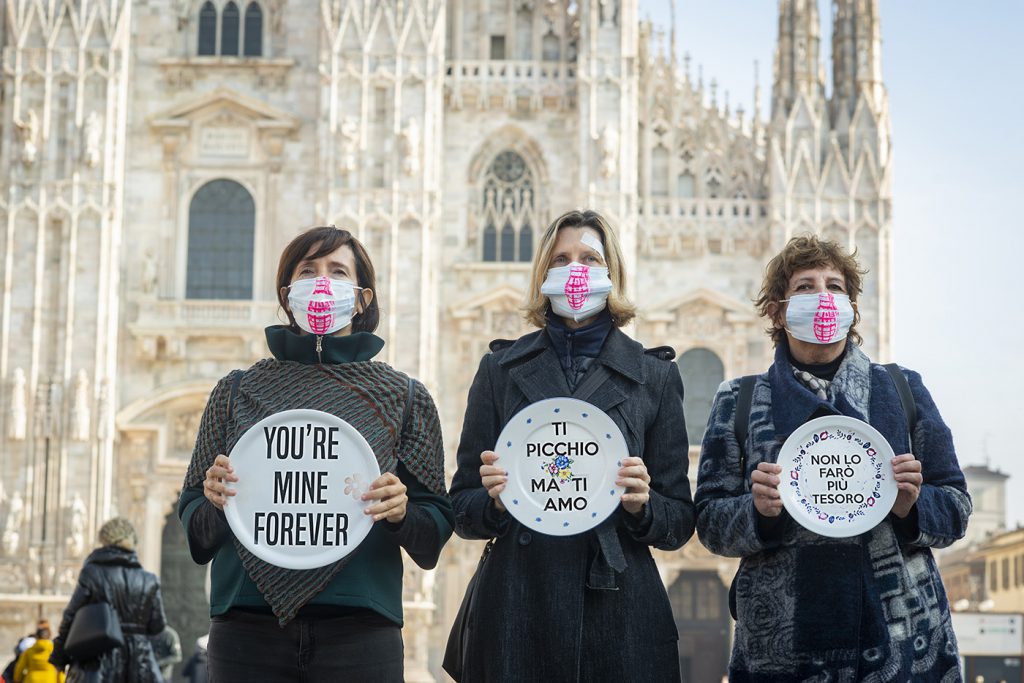 It is hard to believe that domestic violence exists, yet it truly is a complex, widespread issue.

Family is often considered as a shrine, a place where people look for love, safety and protection. But evidence shows that this is not always the case.

This does not seem to be related to age, economic situations, education levels, or whether a family lives in the first, second or third world. These women were not murdered by strangers or some bogeyman, but by people they were planning a life together with.

At times, domestic violence appears to be triggered by the slightest thing, and tensions break out even if we heroically try to keep them under control. I am pretty familiar with this kind of situations, which can be found in many of my first works. It only takes a bunch of minutes for everyday objects like scissors, knifes, cleavers and pots to become crime evidence. The transparent knives floating above us are an almost invisible threat, like pastel-pink grenades that describe our homes as war fields.

As an artist, I will not look the other way as thousands of people get killed or abused all around the world just for being women. Remembering the victims and revealing the sick reality behind what we call “normality” can be a start.

I know that it is unlikely for art to change society, but I believe that, besides offering aesthetic experiences, art can help to change the viewers’ perspectives and make them question their assumptions.

The World Protection Forum does not stop!

Excellence Magazine Luxury and Kelony, First Risk-Rating Agency, continue their collaboration in order to provide tools and contents that can be a valid support for understanding the true meaning of "risk", a very current issue for individuals and company
Read more
Art & Design

Guangzhou Circle. Gate of Jade of the Third Millennium

Designed by Italian architect Joseph di Pasquale, Guangzhou Circle still retains all its iconic nature and its character as a landmark building seven years after its inauguration. Since then it has entered the collective memory of the capital of the Guangdong province as one of the symbolic identities of the Chinese metropolis, a true southern gateway to the ‘Middle Kingdom’, but also a point of reference in the dialectic between East and West.
Read more
Destinations

The resort’s sustainability starts from its building materials, which were all sourced locally and have a low environmental impact. Being welcomed and staying at this small private atoll in the middle of the Ocean is a luxury that cannot be missed
Read more
Load more

A Tribute to Pierre Cardin: Furniture Like Sculptures To Dress Up Your Home

During the 2017 Salone del Mobile in Milan, the Carla Sozzani art gallery held the exhibition “Pierre Cardin, Les Sculptures Utilitaires”, which introduced the world to the ambitious project that the designer had started back in 1970 and that is still under development today.
Read more
Art & Culture

Interview with Stefano Zuffi: The value of a Choice

When we are be able to start moving again, we will all be eager to take our lives back. It will be crucial to use this moment to make the experience of art not just something secluded, a reaction to the isolation that we have all suffered, but a beautiful habit
Read more
Design

"Unity in Diversity" is the national motto of Indonesia. But beyond that, the profound idea of balance between wholeness and difference lies at the core of the working principle of the architecture & planning company Artalenta
Read more