From Dada to Hip-Hop: Art which gives a new shape to the reality

His name is Mario Loprete, he lives in Catanzaro, or rather, how he loves to say, only nine hours from New York. Painter and sculptor, graduated at the Academy of Arts in Catanzaro, participated in a number of one-man and group shows, exhibiting his works in France, Greece, United Kingdom, Italy, Netherlands, Spain, United States of America. We asked him to talk us about himself, his viewpoint on world, and his art.

“My art is always dedicated to those who can recognize it. To those who can see a message. To those who see my message. Art is bought for passion, for pleasure, to invest. I like to think that who buys my works, also buys a temporal door and who wants to enter it, will be conducted into my world, into my way of doing art.

It is not the man that chooses to be an artist, but it’s the Art that possesses the person.

I live in a world that I shape at my liking, throughout a virtual pictorial and sculptural movement, transferring my experiences, photographing reality throughout my filters, refined from years research and experimentation. Painting for me is the first love. An important, pure love. Creating a painting, starting from the spasmodic research of a concept with which I want to send a message, to transmit my message, it’s the base of my painting. The sculpture is my lover, my artistic betrayal to the painting. That voluptuous and sensual lover that gives me different emotions, that touches prohibited cords…”

“At some point of my career, I felt the need to utilize a theme that could be comprehended by everyone. In the Hip-Hop I found the solution. It’s a philosophy of life, without geographical borders. Rap music always made me company in my study. It was the soundtrack of my work. Music is art and it’s a part of my work. I prepared a beautiful series for an imminent art show composed of musical CD, covered in concrete, on which I painted some B-Boys who dance. These are contained in their casing of plexiglas. Nowadays the musical lector could never play the music of a CD, but the music on the inside is there and it will always be there. Looking at an egg you already know that there’s a yolk in there, without the need to open it.

Now I’m working on an ambitious project: the DADADA Beach Museum, whose artistic director is Roberto Talarico, refined and farseeing art collector…a permanent art museum on one of the most beautiful beaches of Calabria. The works that I’m creating are all made in concrete, proposing the rejection of the senses and of the logic, that would see the cement and the sea at the antipodes of the rationality. I emphasized the extravagance, the derision and the humor that objects of common usage were all in concrete. Paraphrasing the DADA artists, who were deliberately disrespectful, whimsical, disgusted by the traditions of the past; I trick in creativity and in concrete all of the materials and the available shapes.” 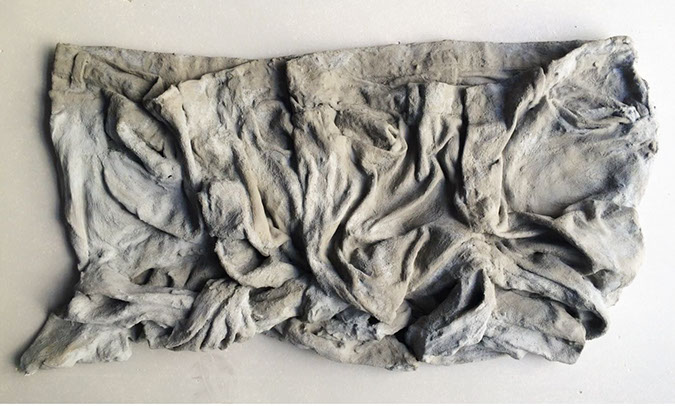