An art path composed of the monumental sculptures of Helidon Xhixha will cross the most evocative landscapes and spaces of San Quirico d’Orcia, Val d’Orcia and Siena, to celebrate 50 years of FORME NEL VERDE, the longest-running international exhibition of sculpture born in 1971 from an intuition of Mario Guidotti, collector, art lover and profound connoisseur of modern and contemporary art. 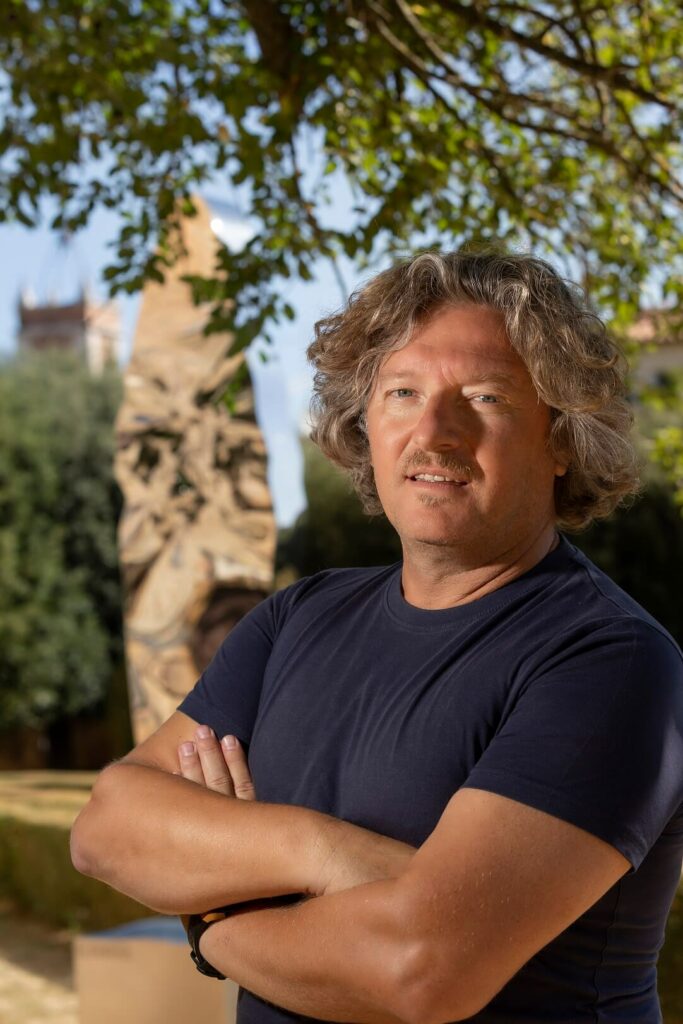 The Medal of the President of the Republic was awarded for its fiftieth anniversary at the Forme nel Verde exhibition, promoted and organized by the Municipality of San Quirico d’Orcia. The important initiative also makes use of the patronage of the Presidency of the Council of Ministers, and of the patronages of the MiC, Ministry of Culture and the Embassy of the Republic of Albania in Italy, and is carried out thanks to the support and patronage of the Tuscany Region. 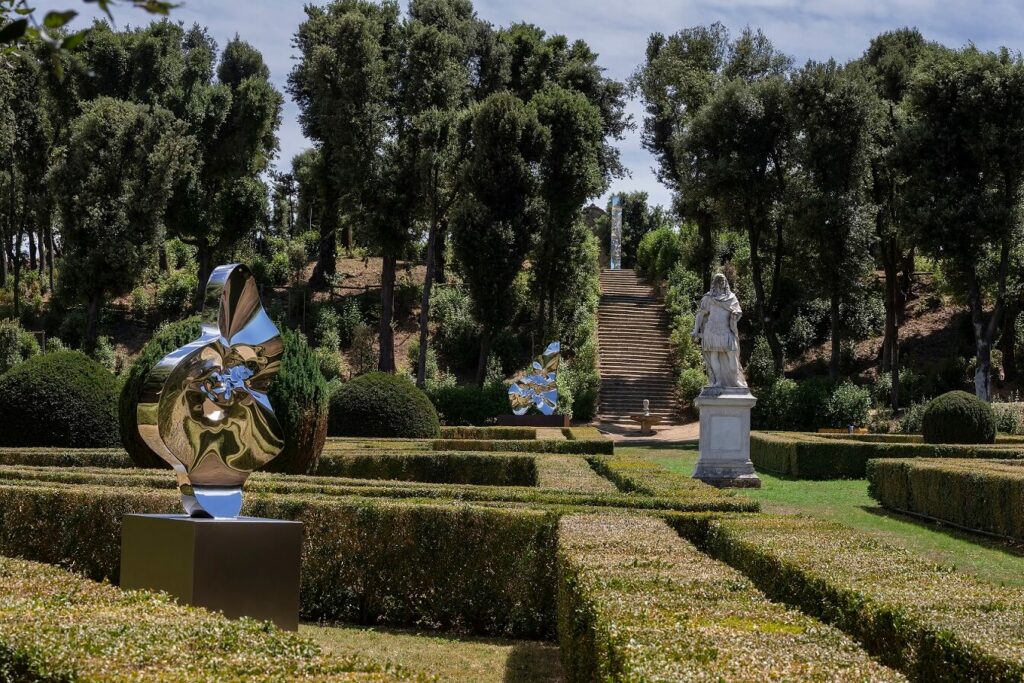 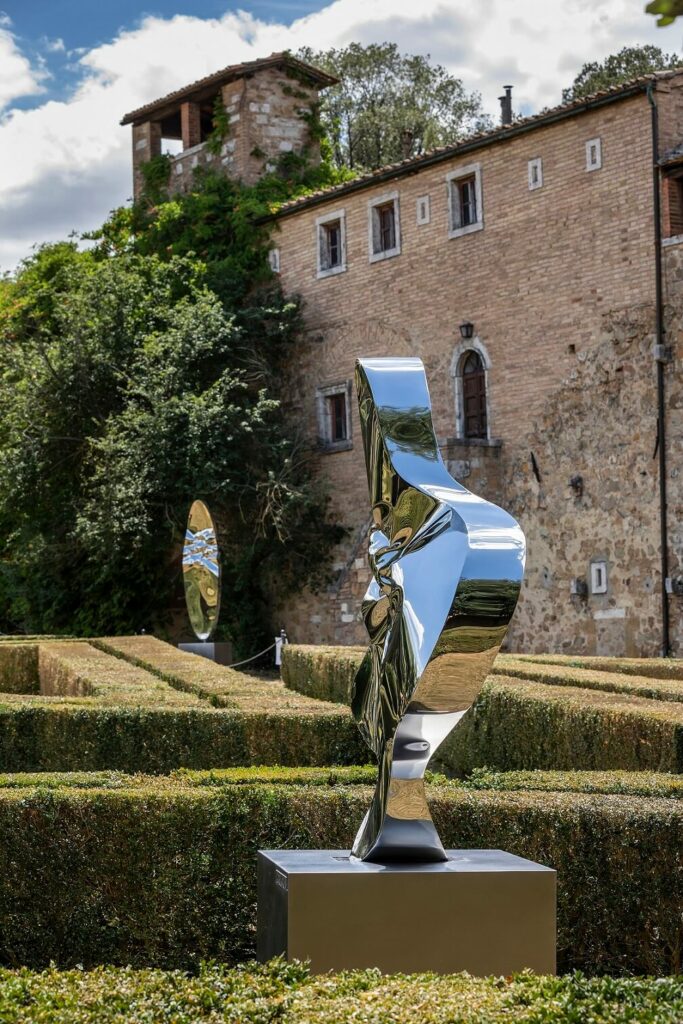 REFLEXES is the title of the exhibition curated by Klodian Dedja and with the artistic direction of Carlo Pizzichini, which sees the installation of 12 works by Helidon Xhixha in some of the most beautiful places in all of Tuscany: the extraordinary Horti Leonini of San Quirico sixteenth-century gardens designed by Michelangelo and located in the historic center, the Chigi square in San Quirico, the famous Cipressini and the Vitaleta chapel on the Via Francigena, the sixteenth-century basin in the heart of Bagno Vignoni and the Piazza del Duomo in Siena.

The monumental forms in polished and polished steel by Helidon Xhixha, which shape the light and its reflections, drag the extraordinary landscapes of the Val d’Orcia, a Unesco World Heritage Site since 2004, into a luminous embrace.

The exhibition itinerary, a real exhibition spread throughout the territory, starts from San Quirico d’Orcia where, in the Horti Leonini, the sculptures, Nebula, Corallo D’Acciaio, Diversity, Rock of the Mediterranean and Sound of Steel are installed. The work Satellite is also installed in San Quirico, in Piazza Chigi, in front of the Collegiate Church.

Along the Via Cassia, in the center of the group of Cipressini, undisputed icon of the image of Tuscany and of Italy as a whole, there is the work Ionic Column, which captures and reflects with its mirror surface one of the most emblematic examples of that agricultural and pastoral landscape which is an excellent example of the Renaissance landscape redesign.

Among the postcard-perfect places in Tuscany, Bagno Vignoni is unquestionably one of the oldest and best known. The spring of thermal water enclosed in the sixteenth-century rectangular basin, which characterizes the center of the village, houses a large steel Iceberg that emerges from the bottom of the basin. 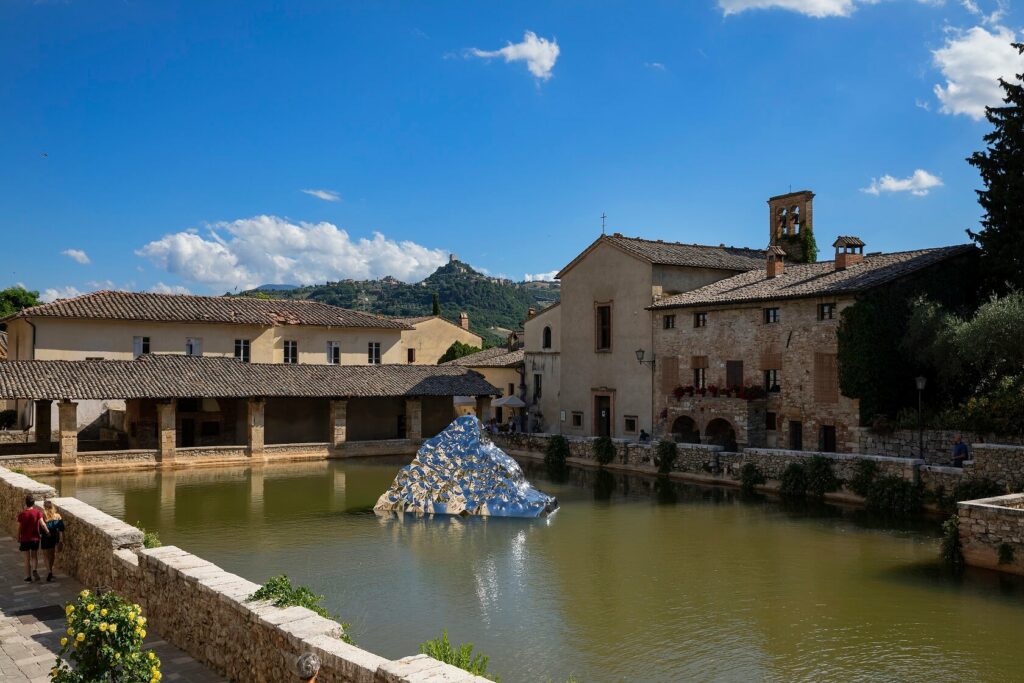 Still following the ancient route of the Via Francigena, in the stretch that leads from San Quirico to Pienza, the REFLEXES exhibition by Helidon Xhixha, organized for the fiftieth anniversary of Forme nel Verde, meets the late Renaissance church of Santa Maria in Vitaleta in which adjacent greenery are the works Conoscenza and Abbraccio di Luce. 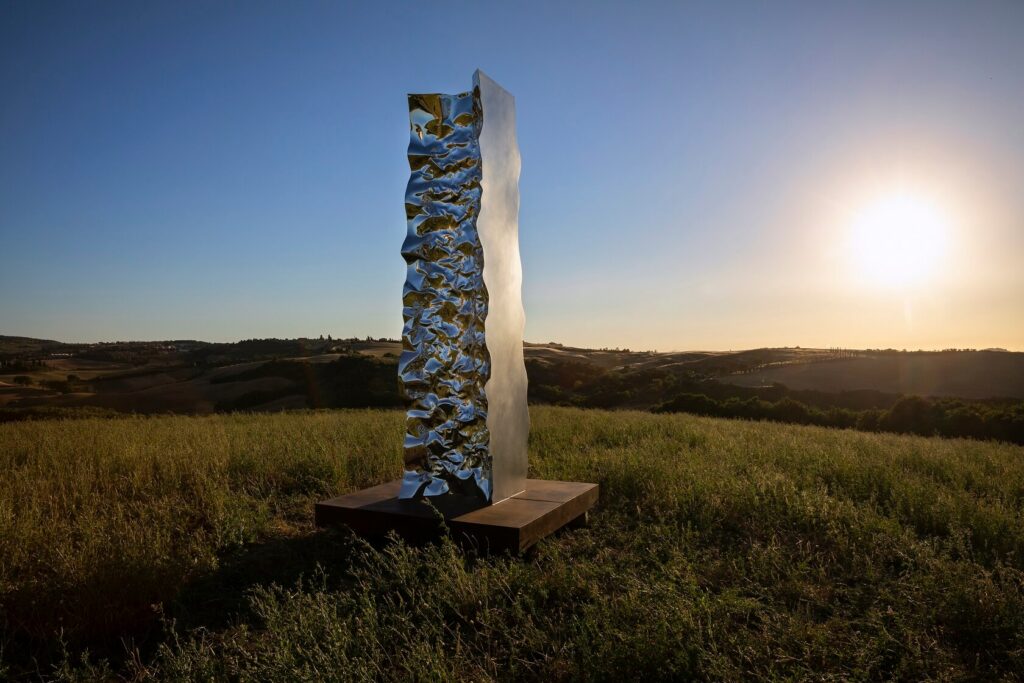 The exhibition itinerary ends in Piazza del Duomo in Siena, in front of the Pellegrinaio, where the work Getto di Luce rises against the backdrop of the Duomo’s marbles, in whose reverberation the buildings in the square and the splendid facade of the Duomo expand. 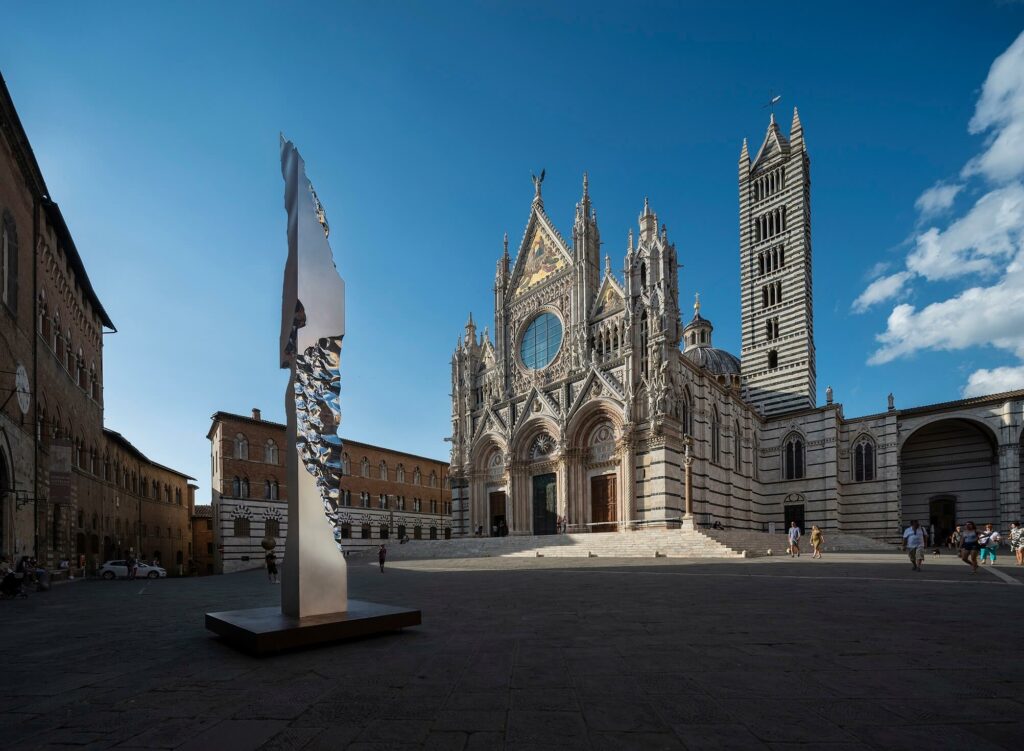 The great charm that this project of a widespread exhibition by Helidon Xhixha in a territory dedicated to art and the relationship between nature and artifice returns, is completed with his large sculptures that are confronted with space and time, the summer seasons and autumnal, illuminating the viewer with the bright colors of the surrounding landscape.

All exhibitions will be open until November 2nd with free admission. The Shapes in the Green exhibition can be visited every day from sunrise to sunset, the exhibitions at Palazzo Chigi-Zondadari follow the schedule from 10: 00/19: 00

The program and all the information on the exhibition are on: www.formenelverde.com