“There is no greater love than the love that grows day by day. Two hands join in a never-ending circle of love, respect, appreciation, honesty, transparency, trust and faith.”

This is how what Lorenzo Quinn expresses with the new work exhibited in Venice can be summarized. 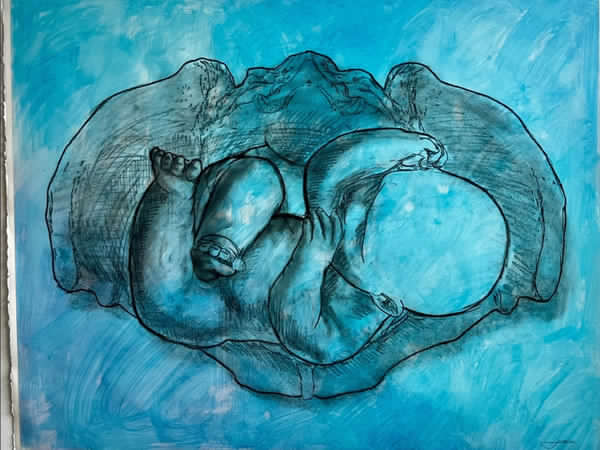 It’s called “Baby 3.0” – a symbol of rebirth, a tribute to the mystery of life that unites every human being and gives hope for the future – the new monumental creation by Lorenzo Quinn exhibited in the garden of Palazzo Corner della Ca ‘Granda in San Marco a Venice, is curated by Amira Gad.

From 15 July to 31 October 2022 the splendid and imposing building overlooking the Grand Canal, designed by Jacopo Sansovino, the historic seat of the Metropolitan City of Venice – which granted the patronage of the exhibition – and also the seat of the Prefecture, hosts a surprising and iconic sculpture which will stand out on the Grand Canal weaving magical reflections with its waters.

Venice, its rebirth, after the high water of November 2019 and the pandemic, has already begun for some time; Lorenzo Quinn’s new work is nothing more than a concrete act that translates the spirit of a community into an artistic creation

is the comment of Luigi Brugnaro, mayor of Venice and the metropolitan city

It is a pleasure to be able to host Quinn’s latest work, which once again demonstrates an immeasurable love for this city

Contemporary artist known for his figurative sculptures, son of Mexican-American actor Anthony Quinn and Iolanda Addolori, Quinn lived throughout the years between Italy and the United States. Initially interested in Surrealist painting, he studied at the American Academy of Fine Arts in New York. At the age of 21, Quinn decided that his future was in sculpture, an art in which could fully embody his energy and originality.

His sculptural work often depicts human emotions such as love and faith, both on a monumental and intimate scale. His works are often inspired by artists such as Michelangelo, Bernini and Rodin. Lorenzo has exhibited his work in several countries of the world and his most monumental and public works, as well as his smallest and most intimate pieces, convey his passion for imperishable values and authentic emotions.

The artist is especially known for his expressive sculptural representations of human hands. Quinn’s work is part of numerous collections, and over the past thirty years has been included in exhibitions globally. His public sculptures have been exhibited worldwide including Support, presented during the Venice Biennale 2017; Together, at Giza, the pyramids in Egypt; Empowerment at Windsor Castle in the UK to name a few.

Building Bridges presented during the 2019 Venice Biennale has become an icon at the end of the Arsenale walk and symbolizes the six universal values of humanity, friendship, faith, help, love, hope and wisdom. Amongst his other commissions include The Tree of Life, created for the United Nations and Empowerment, for The Duke of Edinburgh’s International Award, that offers young people new opportunities, and thus empowering them to grow and feel their worth.