Painting the dream of Creation

A 4-day trip on the island of Ponza and to Avezzano were enough to make me understand that certain people with great ideas have a place, a refuge, lost in time and in the wild of nature, where space is created for the mind and soul, in search of the true origins of themselves, or the primordial state of man, and in the case of Alberto to also discover the origin of the cosmos. 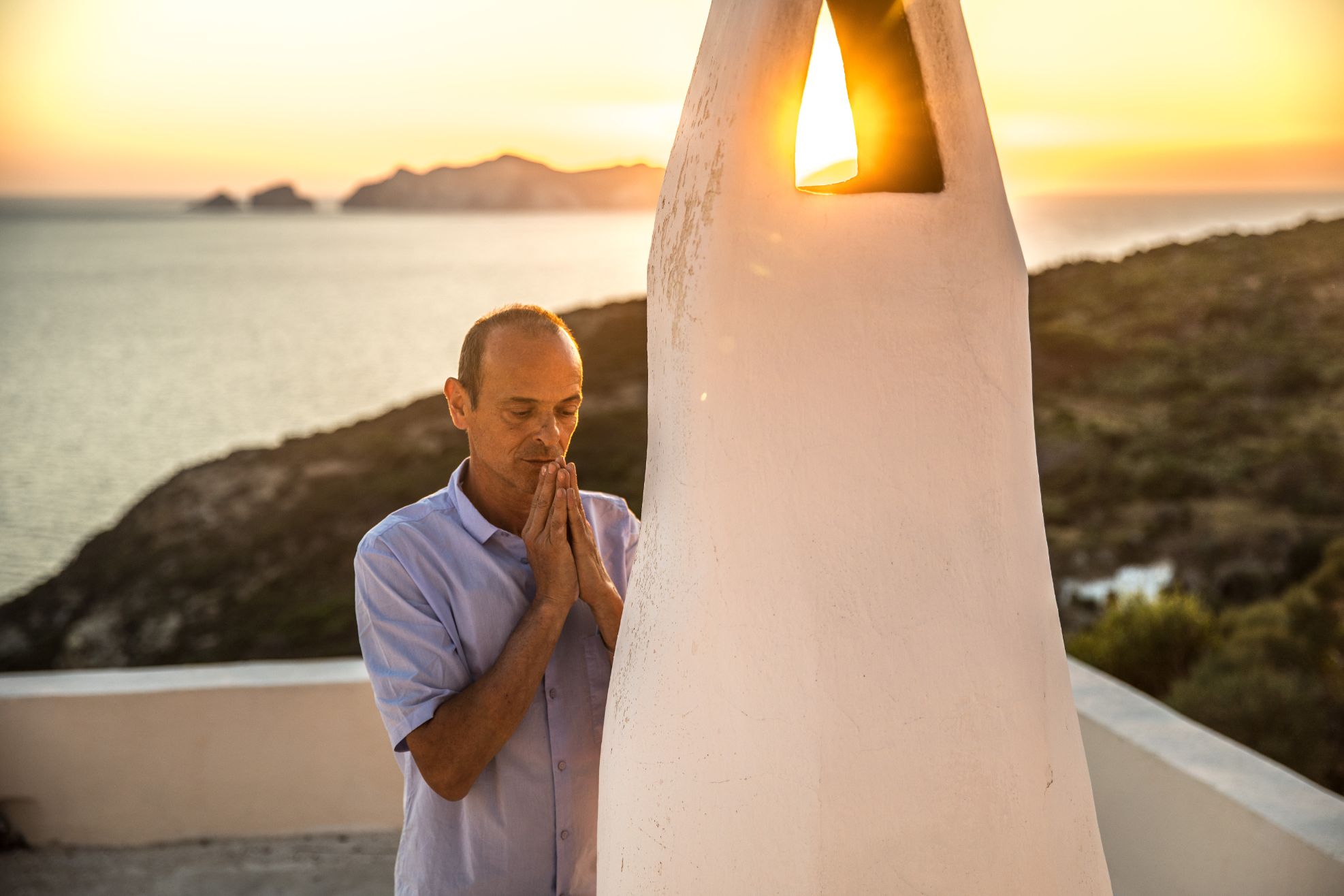 The two places I just mentioned are the creative sanctuaries of Maestro Alberto Di Fabio, a visionary painter, husband and father of three children. Di Fabio, born in Avezzano in 1966, first studied at the Liceo Artistico and at the Academy of Fine Arts in Rome and at the Academy of Engraving in Urbino. Now he lives and works between Rome and New York. His work draws inspiration from the cosmos and the elements that make up the natural world. Between art, science and spirituality, his paintings investigate chemical reactions, the fusion of minerals, atoms, DNA, the neural system in relation to the world of astrophysics, magnifying them as under a microscope. These often geometric shapes manifest themselves and vibrate on his canvases in bright and pure colors, creating contrasts and harmonic scales, tonal variations and surprising combinations that involve the viewer in almost extrasensory visions.

Alberto’s works have captured the attention not only of collectors and world-renowned personalities, but also of the largest nuclear particle physics research center: CERN, in Geneva. In 2014, Di Fabio was awarded a prize for painting his vision of a galaxy which, two years later. was photographed extensively through the Hubble telescope. The resemblance to the painting was indisputable. Invited to receive his award, Alberto discovered that the Institute’s mathematicians appreciate and reward some artists who manage to develop the creative hemisphere of the brain to the point of being able to intuitively perceive images (or even sounds) that represent complex mathematical formulas. They often remain so, until technology is able to photograph the natural processes that the human eye is not able to perceive, but that somehow Alberto is able to visualize through his third eye, and then share his visions through painting.

The Maestro tells us that “Everything is created by processes, fusions that range between order and disorder, the forces of gravity, of magnetism and uncertainty are always present in my cosmo-logical works, where the term cosmos must be understood in its etymological sense of kosmos, that is, in the dual meaning of order and ornament. A formal synthesis, where elegance and harmony must paradoxically be reconciled with the instinct and intuition of the brush bearer, which is by definition something indeterminate and indefinable, an observational and at the same time visionary cosmology.”
The dream dimension represents the conceptual medium for understanding laws that would otherwise remain hidden, while the physical and concrete medium is to be identified in a pictorial gesture. This dreamlike vision, superimposed on concrete reality, is the mirror of a personal subconscious aimed at an aesthetic and individual liberation of the being. The pictorial gesture is a spiritual gesture necessary to grasp that cosmic breath, that divine breath that is the basis of the incessant origin of life. Painting as an expressive medium to narrate a dream, and the dream as an ideal state for gazing at the unknown universe from a different standpoint, a red thread that connects art, science and spirituality.”

I also had time to understand that Alberto’s unique point of view was born not only from his life experience in connection with nature but also from the combination of different perspectives shared by his family: “I dedicated myself to reading scientific books, those of my mother Delia, a science and mathematics teacher, and of my sister Simona, who studied medicine. From them, I copied the cells and other illustrations of biology, chemistry, physics. Through landscape and macrocosm visions I entered the “magma”. I was interested in mineral fusions, in the composition of silica, quartz, gas. From all these things my love for science in relation to the Spirit was born.”

Alberto’s father, Pasquale Di Fabio (1927-1998), is an important Abruzzese painter and sculptor, and in Avezzano his works can still be seen in the public parks of the town, and even Pope John Paul II commissioned him for works at the Vatican. It is clear that Alberto’s “DNA” is rich in creativity and culture, and this has certainly influenced his brilliant talent. His artistic gift allows us to enter a meditative state induced by his work, and switching off the analytical and rational part of the brain, it makes us dream of what awaits us beyond this cosmic reality.

By Edward A. Haschke