Palazzo Pucci returns the grand halls to the city

After about forty years the doors reopen in Florence, near the Duomo, the richly frescoed rooms of the historic palace of Via de ‘Pucci. The corner wing with Via dei Servi, owned by the Archdiocese of Florence, has been under a careful renovation for the last five years, made possible thanks to the collaboration with the Fondazione Cassa di Risparmio in Florence. With the new management by PALAZZO PUCCI EVENTS&ACADEMY, a newborn reality for organizing events in Florence, the restored Grand Hall, which also welcomed a youth cinema in the past, resurfaces in splendor. The Palazzo is the new reference address for events, for training courses in fashion, craftsmanship and goldsmithing, among others.
After a major restoration lasting five years and after being closed for about forty years, some of the most valuable Palazzo Pucci halls are finally returned to the city. Florence and her visitors can see again the glory of the places that for many years have welcomed Florence’s leaders, trade associations and the Catholic press. For decades, Palazzo Pucci has been the headquarters of Toscana Oggi, a Diocese information body, which now has been assigned an appropriate place in the heart of the city. It is still home to Radio Toscana and Radio Firenze. Perhaps not everyone knows that the “Apollo Grand Hall ” – the ancient Party Hall – forty years ago, hosted the “ABC dei ragazzi/The ABC for kids” cinema, which has long been a cultural influence on Florentine families, and that in the same building are the Caritas Diocesana, Agesci and Ceis-Centro di Solidarietà Firenze Onlus, national charities and rehabilitation programs that help immigrants, youth and the poor. 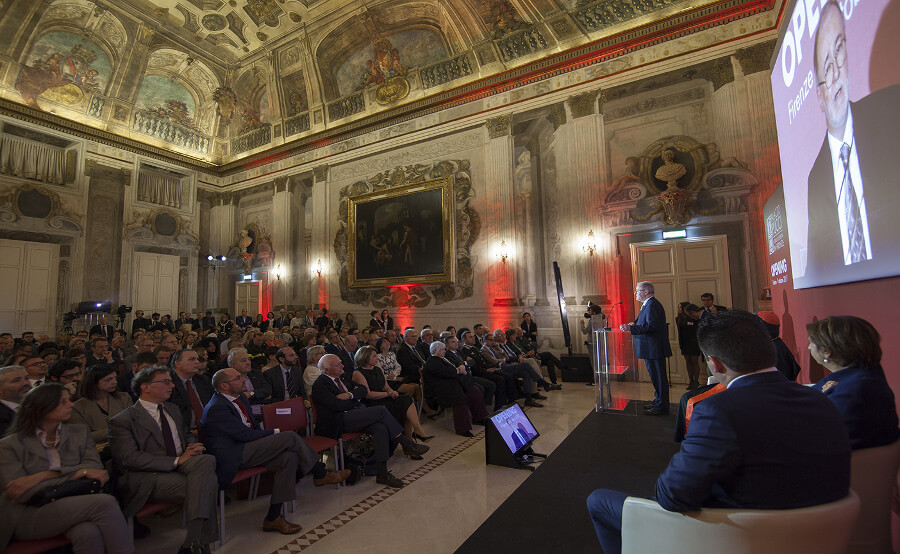 With the recovery of these spaces, PALAZZO PUCCI EVENTS&ACADEMY is founded in Florence, a new reality created by well-established professionals in the sector and by Fondazione Spazio Reale/Spazio Reale Foundation. Together, we/they will be organizing and managing events, not only in Palazzo Pucci, but also at Spazio Reale, a multifunctional conference center of 25,000 Sq.m near Florence, equipped equipped for training conferences, sporting events, catered affairs, and more.
The palace of Via de ‘Pucci 2 has an important history, attested by many precious works of art. The first part dates back to 1480, when Antonio Pucci purchased the area’s houses and gardens. Subsequently, there were extensions and architectural renovations performed by illustrious architects and artists, such as Giovanni da San Giovanni, Jacopo Chiavistelli e Giovanni Domenico Ferretti. In 1901, the building was declared a national artistic heritage site by Direzione Generale delle Antichità e Belle Arti (General Directorate of Antiquities and Fine Arts).
What makes the Palace famous, in addition to the charm of the large frescoed salons, is the criminal case associated with the walled-up window that remains a witness to the “conspiracy of the Pucci.” The Pucci family was allied to the Medici leadership for a long time until 1560, when Pandolfo Pucci took part in the conspiracy against Grand Duke Cosimo I. A killer was supposed to assassinate the Grand Duke right in front of the Palace as he walked to the religious celebrations in the Basilica, in the nearby Piazza della Santissima Annunziata. Pandolfo Pucci was discovered and hanged along with his accomplices, and the window from which the assassin was placed was walled forever, in memory of the event and for the punishment of the family.
Located in the heart of the historic center of Florence, a few steps from the Duomo, Palazzo Pucci, named after the same street, is now divided into two parts: one still owned by the Pucci family, the other by the Archdiocese, that carried out restoration work, also with the contribution of Fondazione Cassa di Risparmio di Firenze. 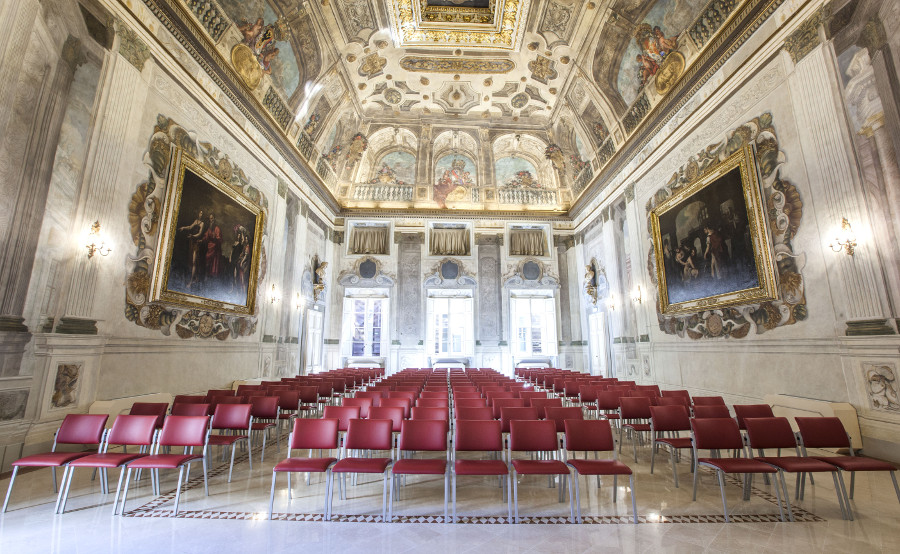 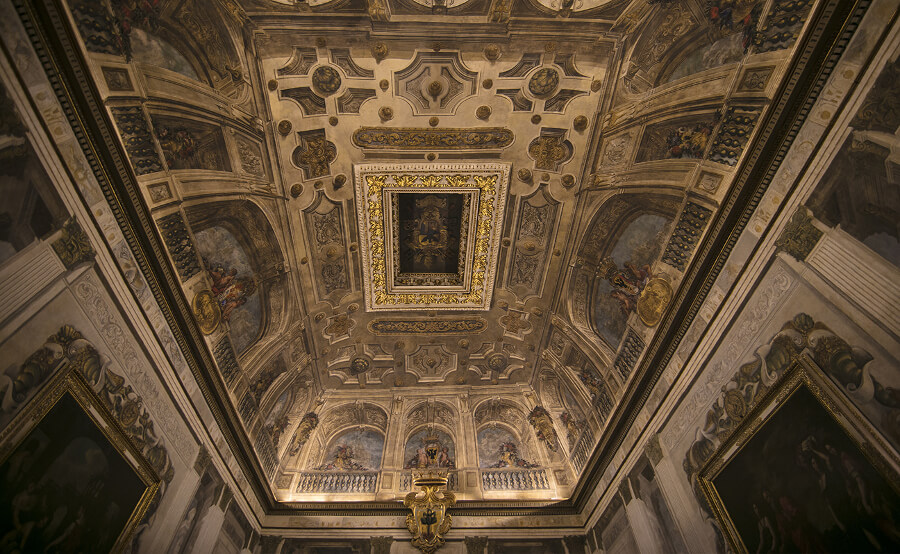 Brought back to the original splendor, the two rooms, the “Apollo Grand Hall” and the “Paride Hall,” richly decorated and elegantly frescoed, are located on the first floor of the building, accessible through the monumental staircase and atrium, and are now ready to host conferences, conventions, events, concerts, dinners and wedding parties. The Apollo Grand Hall can accommodate up to 180 people seated, while the Paride Hall has a seating capacity of 90. On the ground floor, a large courtyard allows flexible special arrangements, or catering services during fine seasonal weather.
The reopening of this wing of Palazzo Pucci allows, thanks to the collaboration between the two important institutions of the city, to count on a new meeting space that contributes to a further enhancement of the city center. In particular, it revitalizes an historic area that houses the Hospital of Santa Maria Nuova and the National Theater of Pergola, one of the oldest Italian theaters in the world.
PALAZZO PUCCI EVENTS&ACADEMY can count on a high level professional and structured network that can provide projects and services for events to companies and individuals. Palazzo Pucci Food Service completes the offer with a catering service both for events in its two locations and in other external locations, with the support of the restaurant LesSeRre, for lunches, dinners, coffee breaks, cocktails and aperitifs. Situated on the ground floor of Spazio Reale, the restaurant has 135 seats, with seating up to 330 seats using a second room; and accommodating up to 1,000 people for cocktails or buffets using the various environments and exteriors, where you can dine in the spring and summer months. 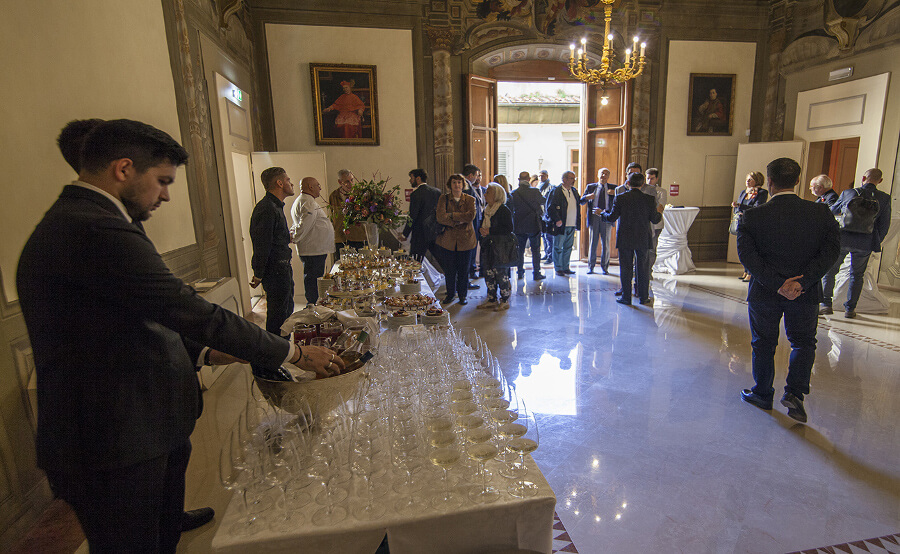 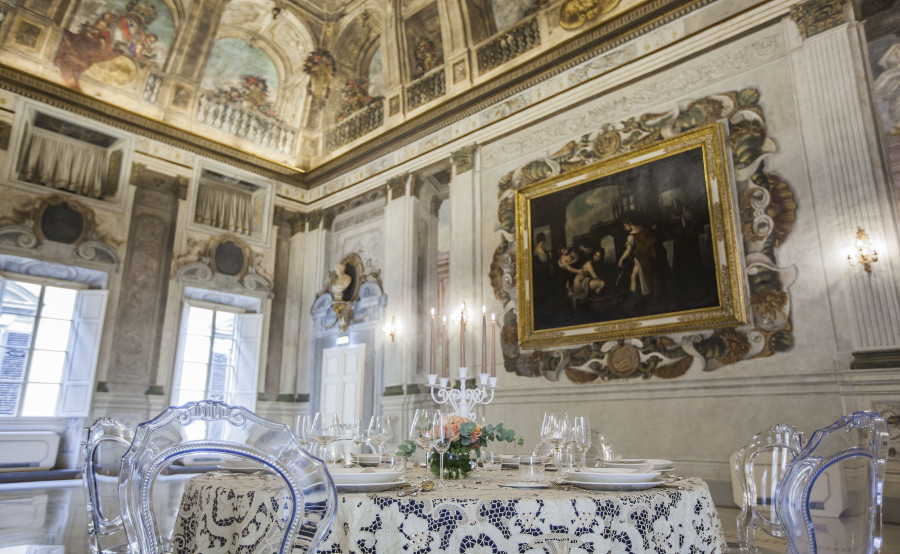 Among the services provided include the design of original and engaging team building activities within the Spazio Reale Sports Center or one of the main halls, in collaboration with trainers and artisans whose PALAZZO PUCCI EVENTS&ACADEMY for seminars in their specialized fields. In the coming months at Palazzo Pucci a real academy will be launched with courses in leather goods, fashion, goldsmithing art and other fields related to Florentine craftsmanship.
Spaces will be used to highlight local craftsmanship, (one of Florence’s main draws at an international level), attracting young Italians and foreigners. An investment that, involving top professionals and local workers, honors the Tuscan capital; bringing value to the city with events and participants who appreciate Firenze for all of its beauty. 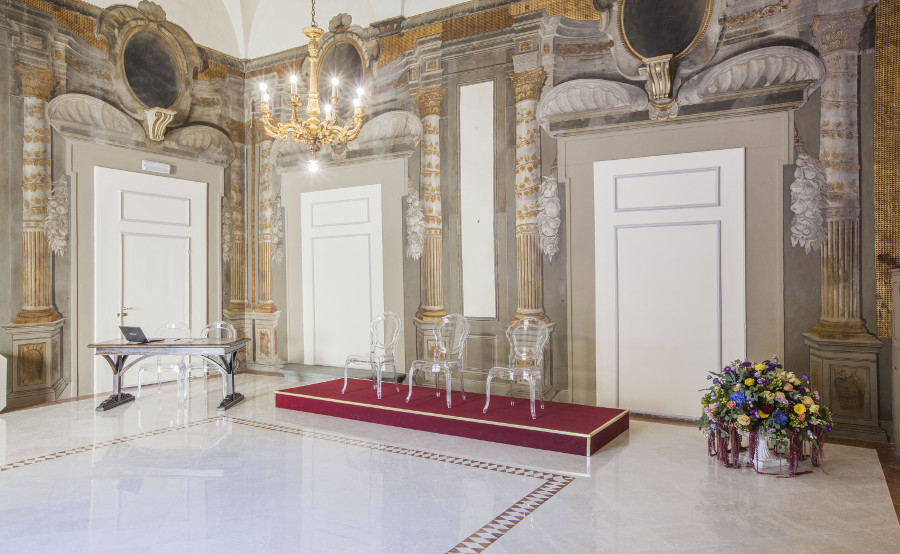