Piero Guccione at the Museo d’arte in Medrisio: a retrospective exhibition on a great artist of blue

Never has another artist been able to render the dimension of light and the bond of blue, the sea and the sky like Piero Guccione.

A key figure in Italian painting in the second half of the XX century, Guccione was born in Scicli, the most southern extremity of Sicily, in 1935. For over forty years, he stared at the sea to capture all its facets, always finding something of the human soul in them.

«What fascinates me is that the sea is absolutely still, yet constantly moving.»This was his everyday mission – to contemplate the sea looking for motion.

Guccione took his research to extreme abstraction while firmly clinging to reality. Even in his last works, refusing definition and dominated by a sense of void, he still stood for a historic painting tradition deeply rooted in representational realism. When painting the sea and the sky, he was fascinated by the strength and color of the fine line separating the two, and always strived to take it to the canvas.

My current painting is moving towards flat representations of the void between the sea and the sky, where color vanishes, and so does space.A sort of flat tending to the absolute, something that reminds of everything and nothing

Writer Alberto Moravia had already defined his essence: «Guccione doesn’t paint subjects and situations, he actually tries to eliminate all illustrations … He has set himself outside history, and voiced a passion that belongs to all times and places, and that alone.»

This “setting himself outside history” was behind his preference for pastels, discovered between 1973 and 1974 as a quick technique to replace the slower one of oil, or be combined with it. From those years on, the use of pastels grew more and more crucial in his paintings, as they allowed him to express his emotions straightly and genuinely by animating nature with human feelings and passions  ̶  joy, pain, melancholy, resentment. 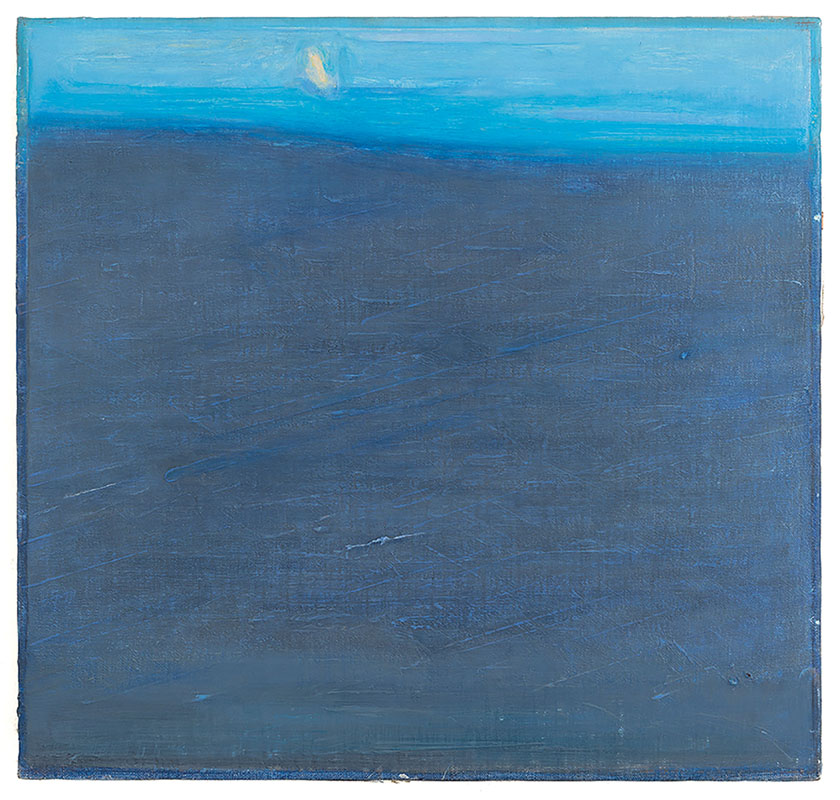 This first post-mortem retrospective exhibition follows Guccione’s journey on the sea through 56 oil and pastel masterpieces, from 1970 to his last works. The paintings were selected by the Museo d’arte itself in collaboration with the Piero Guccione Archive.

The museum also published a catalog giving insights on the exhibition –120 pages of photographs and descriptions that present all the works on display, introduced by additional contributions from scholars, and followed by a bibliography and a selection of the paintings.