Porcelain: the white gold on the tables of VIPS and royal houses

Porcelain is a precious and contemporary art, appreciated more than ever as part of a distinguished heritage of the past and expressing today a luxury lifestyle as well as a form of investment. Last June in Paris, Sotheby’s sold a rare piece of porcelain dating back to the Qianlon Emperor at the hammer price of 16 million Euros.

The history of porcelain in Europe goes back to the first years of ‘700, when King Augustus of Saxony – nicknamed the Strong – appointed one among his alchemists to recreate gold. His experiments failed, but he achieved to get a particular type of stoneware, from which he obtained the first porcelain, called ‘white gold’ from there on. In 1710 Meissen established, both the Maison and the house of the art of porcelain. Meissen artistic creations are present today in all international galleries and on the tables of royal families and VIPs. Motifs are displayed in a huge variety, among them the viburnum flower, which decorates the teapot offered by Augustus of Saxony to his consort Maria Josepha in 1739, still featuring in a collection today. Meissen tableware is very appreciated by the fashion elite too: Miuccia Prada prefers the red dragon, Valentino wants on its tables sublime swans and white and blue flowers. Among the enthusiasts, Giorgio Armani and Peter Marino, architect of Dior and Louis Vuitton.

Last Salone del Mobile di Milano, the design-celebrating fair, amidst the most interesting exhibitions presented “L’arte di essere fragile” (The Art of Being Fragile) held at the Poldi Pezzoli Museum. There, besides the Eighteenth century “Swan Service”, consisting of more than 2200 pieces, displaying a couple of embossed swans swimming in the middle of the reeds, it was possible to admire the most recent pieces, like those of the American Chris Antemann, with her modern and sometimes erotic interpretations of the Eighteenth century figurines, in a blackdrop of sumptuous dinners, picnics and blossomed gardens hosting love scenery. In Milan, the artist has shown some works of his Antemann Dreams Collection, like the “Little Maid” statuette. 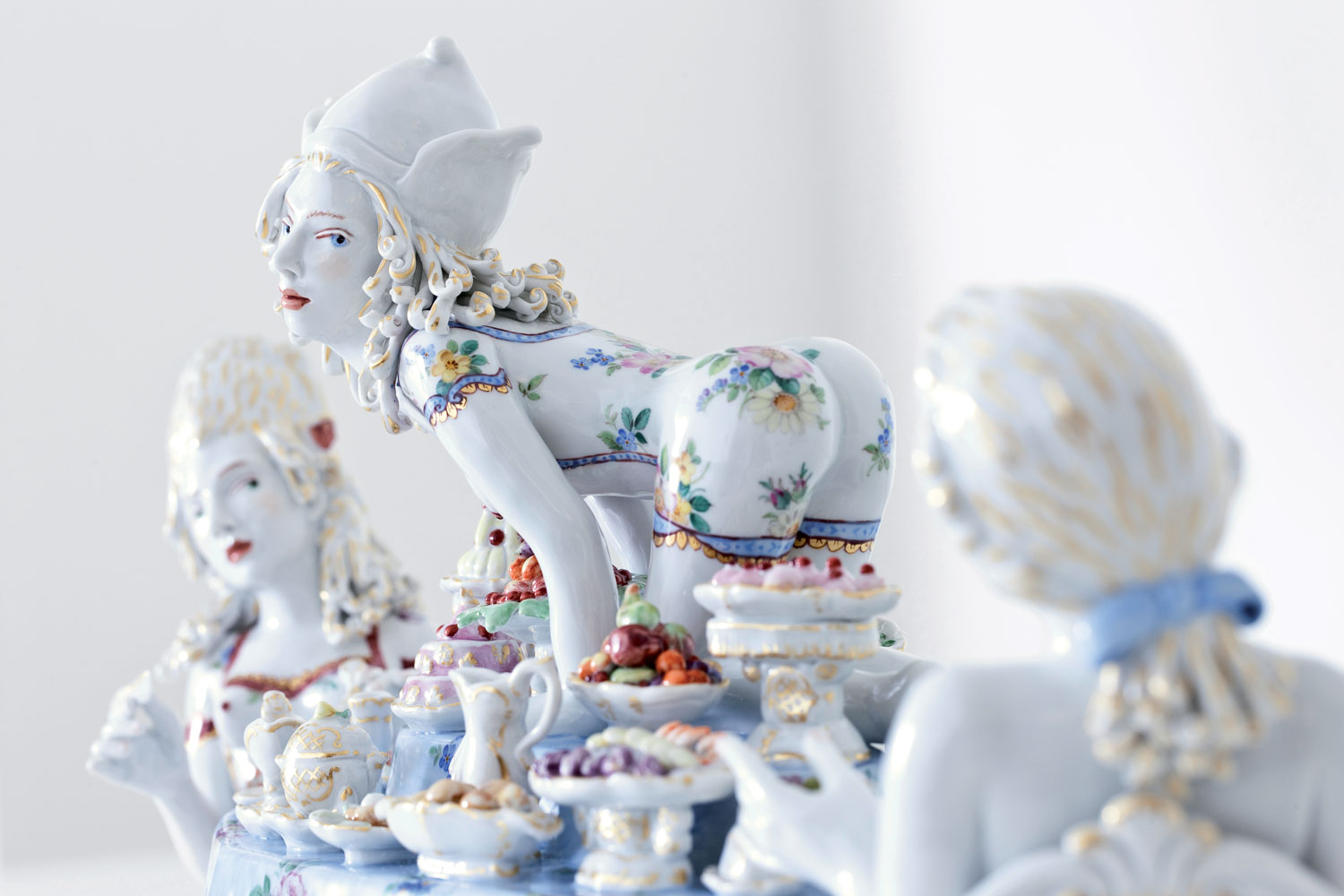 Not only does the world of Fashion appreciate porcelain, but also integrates as the creative mind of it, as in the case of Richard Ginori. Since 2013, Gucci prodigy designer, Alessandro Michele and his team have been managing the artistic direction of the Florentine manufacture. Born from the Marquis Carlo Andrea Ginori’s passion for the ’white gold’, the porcelain production was launched in 1739 at Doccia and destined to become an icon of style the world over. Michele has created a series of crockery with the patterns of the house: Herbarium floral print, geometric chevron patterns, a charming pink and the drawing of an eye. Animals of the Gucci Garden – bees, butterflies and rooster heads – are reproduced on porcelain in 3D and applied on teapots and covers. Besides, embossed coleopters and bees sustain the stickers of little incense holders. Today as then, the tradition of the Florentine house has always been the same: to transform porcelain in pure beauty. Richard Ginori is expression of excellence in Italy and in the world of the high artistic porcelain manufacture since the beginning of the Twentieth century when it was given to the artistic supervision of Giò Ponti and later, in the Eighties, when it was renewed by the experience of the greatest Italian designers: from Franco Albini to Franca Helg, from Achille Castiglioni to Gianfranco Frattini, just to name some.