SANTAMBROGIOMILANO is a business enterprise that develops projects from the glass as exclusive unique pieces that can fit in all areas of daily life. The collection called SIMPLICITY was born from the cooperation of Carlo Santambrogio and the designer Ennio Arosio. This innovative collection gives a “transparent” shape to the a clean and essential way to concept and to live the spaces, where every element even if strongly characterising, they don’t overhang the surrounding environment, but instead blend harmoniously.

SIMPLICITY is made from extra-clear glass of Saint Gobain. This tempered and laminated glass was named Diamond because of its extreme purity and brightness, performed in unique way through the use of very relevant shims (from 30 to 60 mm) and treated with special technical procedures designed to ensure absolute safety. Key feature is the uniqueness of each item, which allows to realise standard parts as well as complex projects in which our creations can change every time the shape, dimensions and finishes, permitting a high degree of product customisation. The basic idea can be adapted according to particular needs, from micro to macro, from the element of furniture to architecture.

SANTAMBROGIOMILANO itself as an ideal project to define new relations between the exterior and the interior space, relations that present new environmental dimensions, layers overlap with different intensity of transparency that combine and mark at the same time the sequence of spaces: though stable and solid, the object done with glass does not interrupt the total perception of the space, being present and absent at the same time. It is a line and a new way of living the everyday complexity.

The shell becomes an integral part of the structure blurring the mass effect through a simple game of transparent reflexes and rigorous lines, it fits itself everywhere is collocated with an awesome lightness. It is like being dropped into a dimension which deletes the distinction of spaces and places in relation to the interior with the external environment, the urban one. Very often, at least virtually, the border line disappears, and we have the impression of a seamless viewing. All this is implemented inside SANTAMBROGIOMILANO project that is leading to private interlocutors, who “dream of living under a transparent cover”. The glass house concept are a totally customise project. Both the glass houses, the woodland and the transparent house, could be build in different areas, from 30 m2 to 300 m2. The custom size permit to project the space following specifically all the costumer demands. The particularity of that project is that the costumer can have a 360° contact with the nature, and two minutes later a totally privacy. This is possible due to some special materials, as the Privalite glass, able to change with just one click a transparent glass to a mat one. Also the presence of some curtains permit to isolate one room to the others. The material used are quite different between the two houses, because the woodland house is projected in a mountain scenery, where the snow can fall for months, and the structure is much more powerful than the transparent house, projected in front of the sea.

The typical client is the one that loves to stay in contact with the nature, the one that uses his house to astonish all his friends and client. Sure is a client that loves design but he’s also one that loves simplicity. The structure follows a rigorous design, with axes exactly perpendicular between each other and perfectly repeated by constant intervals, making it a structure where each element has a key role in architecture.

The technology combined with the technical knowledge overcome the idea of fragility that glass transmits, using it in a structured manner without introducing other materials. Even under the climatic aspect, the leader company Saint Gobain supported us allowed us to solve problems coming from different climatic seasons, using insulating glass that are heated if necessary. 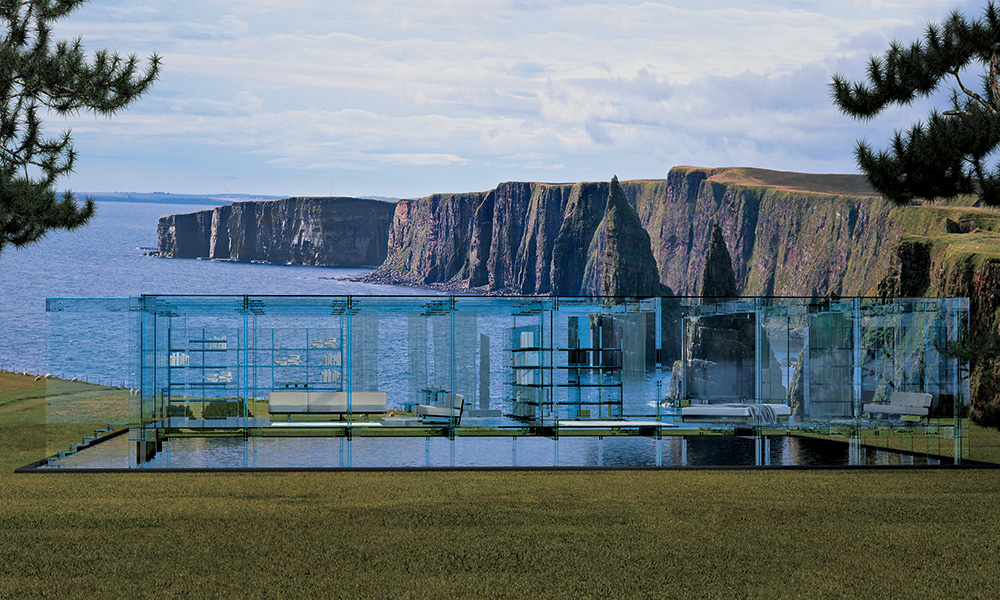 Even the concept of privacy has been revisited: in a fact the architecture is contextualised in an environment where privacy is given by the room itself, having open spaces that surround it. Inside the house instead privacy is ensured by the glass that change the degree of transparency, from clear to opaque through a simple switch.

Once again Santambrogio shows that “to design” and “to project” means “to look with passion” exactly online with the old famous maxima “who continues to seek at the end finds”… what is invisible.

For any other information, don’t hesitate to contact us: