Cooking: a passion, or a profession?

To be totally honest, it all started as a mere necessity. I come from a humble family, and even as a boy I already felt the need to work to earn some money for myself.

At the age of 14, one of the few jobs I could do was working as a waiter, so I enrolled in I.P.S.A.R. hotel and catering college in Villa Santa Maria, a village near Chieti, in the Italian region of Abruzzo, where I was born. Renowned for being a springboard for Italian cooks, the school helped me find my first part-time weekend jobs in restaurants all around my native town, Guardiagrele. This is when my passion for cooking arose, and it has never faded all along the last 24 years.

How did you start your business?

I started working in catering in 1995, when I embarked on a long journey taking me from Italy to the rest of Europe, the Emirates and Asia, where I am currently based in Shanghai, China. I run a company offering consulting services to hotels and restaurants  ̶  a private cooking studio where my team and I host food design and tasting activities for clients wishing to open new restaurants, or to bring new twists to their style. We also test and evaluate new food products to be launched on the Chinese market.

We own another consulting business in Hong Kong, where we provide head-hunting services for hotels and restaurants in Asia.

I work as the cooking director of three Italian restaurants in Shangai, Suzhou and Wuxi, and this year I have just confirmed my collaboration with LAVAZZA as a brand ambassador for China, Hong Kong, Macao and Taiwan.

If you follow the rules, acknowledge other people’s value, respect the local culture and work hard, China makes everything possible. 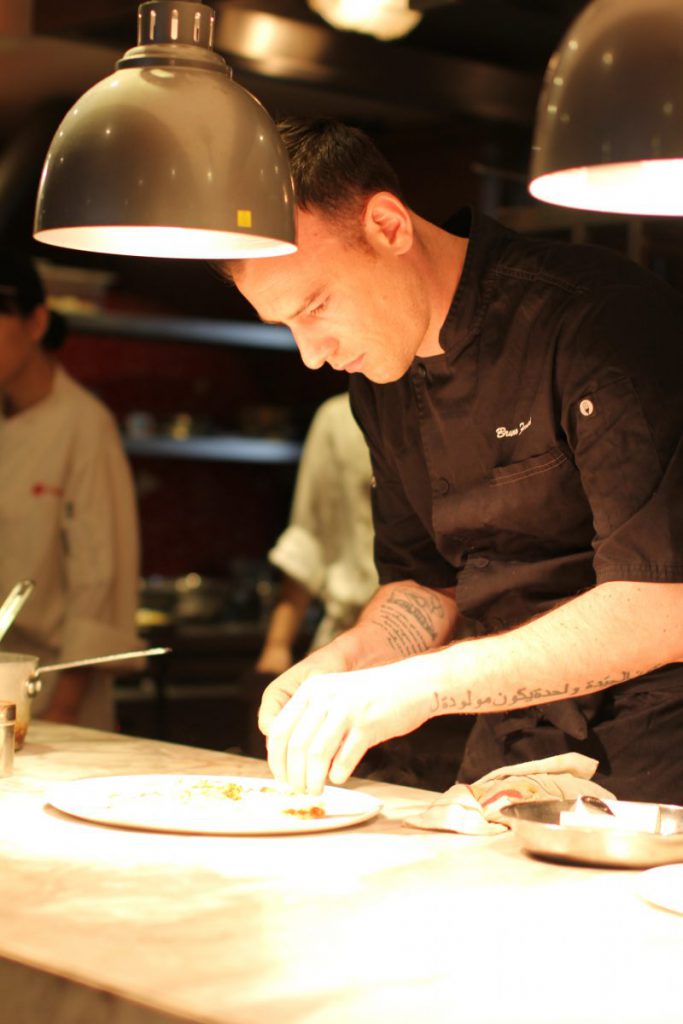 Which experiences have shaped you the most?

When I was still living in Italy, my experiences were almost all exclusively related to work. I learned a lot about both the Northern and Southern Italian cuisine, but I had my most life-changing experiences once I left my native country. I met people speaking different languages, following different religions and working in different ways than those I had come to know in Italy. Although it was not always easy, all of this allowed me to grow and realize that there was so much more to learn and see outside my country.

Something I will always tell my colleagues leaving to work abroad, as well as those determined to stay, is to appreciate what Italy has to offer in terms of raw materials and quality, as such excellent ingredients will be hard to find abroad  ̶ they might not be able to taste the same fresh mozzarellas, or to eat in family-run restaurants following traditional recipes.

I miss all of this, but at the same time leaving Italy has given me a chance to discover different culinary cultures  ̶  the Arab, the Indian, the Asian  ̶  that have deepened my knowledge of food and educated my taste even further.

Was your career choice significantly influenced by anyone you met?

I’ve met thousands of people working as cooks or chefs, and as a boy I used to think I should follow their example. As I grew up, the path I took and the various experiences I lived made me realize that I can set a good example myself for future food professionals taking their first steps in this job and life.

What made you opt for China?

This is an interesting question, as I had never thought of China as a place where I would be spending more than five years of my life. It all happened by chance in 2014 in Bangalore, India, where I was working as the chief chef of an Italian restaurant I had just opened at a JW Marriott Hotel. Here, almost one year later, I met one of the managers of Shangri-la’s executive chefs. Shangri-la is a renowned hotel chain in Asia, also counting some hotels in France, London and elsewhere in Europe. After four back-to-back dinners at my restaurant, he introduced himself and offered me a job at a new venue the chain was building in Shanghai. Six Skype interviews and five months later, I was one of the 6 chefs chosen out of 128 candidates to fly to Hong Kong and take part in a food tasting organized by Shangri-la, and I got the job. On August 22, 2014, I arrived in Shanghai, where a new experience was waiting for me. I worked there for 12 months, then I opened the businesses I am still running today.

What are your next goals?

I’ve been working in this field for 24 years, so I do not have many goals left to achieve, as I have already completed a project of the utmost importance to me. Now my dream is to find a group or partners in Italy to open a restaurant based on Italian cuisine blended with some Asian and Chinese food traditions I have experienced in the past few years.

After living in Shangai with another 30 million people, I would like to set up this business in one of Italy’s largest cities, maybe Milan, or Rome … and not to leave China, which has given and still gives me so much.

Food has become trendier than fashion. When 12 years ago I created a Facebook group to discuss cuisine, it was one of the first. When I posted a video on YouTube, I would receive comments of viewers thanking me for my tips and for sharing my recipes.

Now, new media convey so much information that everyone deems themselves as experts and feels legitimate to criticize even video recipes presented by well-known star chefs. I think TV shows should educate watchers rather than spread false myths like most do at the moment.

I still follow the Italian news, and I’ve recently heard that enrollment at hotel and catering schools has increased, as many young students dream of becoming “chefs”. Despite what they see on TV programs, though, fame and success have little to do with the reality of this job. When I started school in 1995, I recall cooking was one of the humblest jobs and the majority of students picked it because they felt called to it, had a passion for cuisine or came from families already working in the catering industry.

Nowadays, being a cook is perceived almost as a game. Many chefs have even become TV stars. I am not questioning my colleague’s professional ethics. However, I do believe that if the public was shown what kitchen life actually looks like, what it means to lead a kitchen brigade, the amount of stress involved in preparing dishes tending to perfection in a matter of minutes to serve your guests … everything would change, and this complex, beautiful profession would be much more valued.