“The whole of science is nothing more than a refinement of everyday thinking.”

Authority and charm: This is what is imparted by Fabiola Gianotti, the Italian physicist who directed the ATLAS experiment at the Large Hadron Collider at the CERN (European Organization for Nuclear Research), located near Geneva. Hearing her explain what the Higgs boson is and why its discovery is so important chips away at the sense of helplessness that is usually found when dealing with physics and its mysteries.

“The Higgs boson is a very special particle, different from those that were discovered earlier (16 in total). It allowed us to understand the origin of the masses of elementary particles. Today we can locate this source one hundredth of a billionth of a second after the Big Bang, the great explosion that started the universe, when the Higgs field came into action, so to speak. Particles that interact with the Higgs field acquire mass, while the photon – which does not interact – is pure energy. This is an essential issue for our lives, because if the fundamental constituents of the atom (electrons and quarks), didn’t have mass, the atom could not exist in a bound state. And without atoms there would be no ordinary matter (which is what we’re all made of), and the universe would not be what it is.”

“It’s been a little over a year since July 4, 2012, when you made the discovery of the Higgs boson public. What has happened since then?”

“At the end of 2012 we recorded three times more data than in July 2012. With this sample we performed numerous measurements of the properties of this new particle. Today we can say with certainty that it is a Higgs boson.” 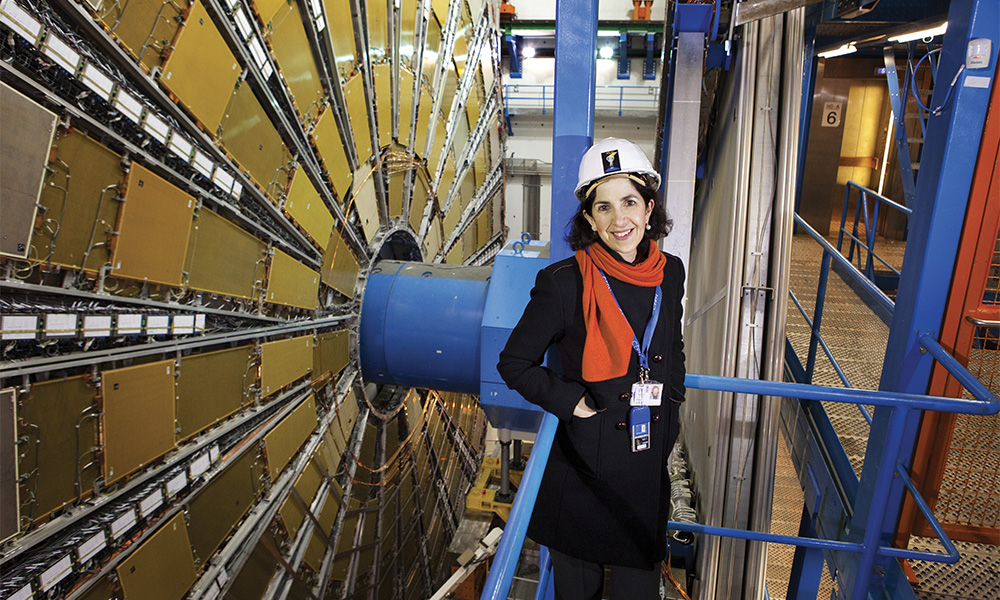 “What do you feel when you make a discovery that is fundamental to the history of mankind?”

“It’s a fantastic feeling, very intense. Taking such a significant step forward in our understanding of fundamental physics and the structure and evolution of the universe is very rewarding for a researcher. In this case it regards thousands of researchers, about 3,000 in each of the two experiments from all over the world (ATLAS and CMS at the Large Hadron Collider at the CERN) who observed the Higgs boson, including many young people. The months leading up to July 4, 2012 were memorable for all of us. Personally, it was the best time of my life as a physicist and we hope that there will be others like it.”

“Before the Big Bang, what was there?”

“We don’t know. For us scientists the Big Bang represents the beginning of the universe. There are “pre-Big Bang” theories, but they’re just conjectures. The dynamics of the Big Bang itself and the evolution of the universe in the moments immediately following are still shrouded by mystery. Our understanding is more accurate to a hundredth of a billionth of a second after the Big Bang, due to particle accelerators; before that we don’t know nearly anything.”

“I would certainly like to learn more about the “dark side” of the universe. Although to date we have made hugestrides in particle physics, astrophysics and cosmology, we only know 5% of the universe’s composition. That is to say that only 5% of the universe is made of the ordinary material of which we’re made of, which are atoms and chemical elements. The remaining 95% is composed of a form of matter (about 20%) and energy (about 75%) that is unknown, called dark matter and dark energy.  The latter is responsible for the accelerated expansion of the current universe. Being able to learn more about this “dark” (and by far predominant) part of the universe is of paramount importance.” 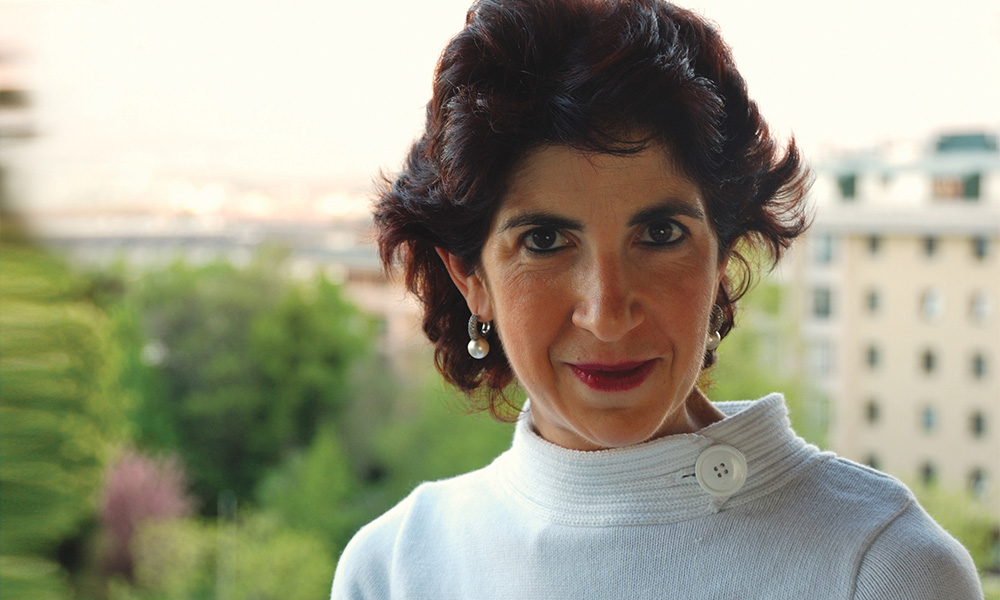 “How does a scientist such as yourself stand in respect to the Church and to the existence of God?”

“Physics cannot show the existence or non-existence of God. Science and faith are based on completely different assumptions and approaches: faith means believing without seeing, however in science, you only believe what you can experience in a reliable and repeatable manner. They are two separate, but not mutually exclusive things.”

“Why do you think that physics is always seen as something very complicated that is difficult to get into?”

“It’s hard to say… I think that is partly due to the way in which the material is taught. Mathematics and physics should be taught in a simple and not superficial manner – it cannot be learned through memorization, it rather requires intuition and reasoning. From this point of view they are extremely intellectually stimulating.”

“What is the life of a scientist that deals with the composition of the universe like?”

“Once there was a cliché that scientists were people locked in an ivory tower, devoted only to their research and completely outside of what is considered mainstream. Fortunately the reality is quite different. We physicists are very normal people. I keep up on politics and what’s happening in the world, I love sports and music and, in my spare time, I go to concerts and to the movies. It is very important for a researcher to keep an open mind. Research is comprised of ideas and insights, and the more open the brain is, more ideas you have.”

“So creativity in your line of work is important…”

“It is fundamental. It only takes one right idea to make great strides in knowledge, like in the beginning of the last century with Albert Einstein.”

“Time magazine called you one of the five most important people in 2012, and according to Forbes magazine you are one of the hundred most powerful women in the world (the other Italian woman is Miuccia Prada). What is it like to be considered so special?”

“I do not consider myself to be special, first and foremost because the results of the Large Hadron Collider, including the discovery of the Higgs boson, are the result of the work of an international community of thousands of scientists for more than twenty years. It is not the work of a single person, it is a real team effort – a very large team at that. I found myself in the privileged position to coordinate one of the two experiments that discovered the Higgs boson, for me it was a great honor as well as a great responsibility. I think this is what attracted the media’s attention. That said, I think it is a good sign that magazines like Time and Forbes choose a representative from the research community alongside politicians, intellectuals, actors, singers and designers, because it shows the society’s interest in science.” 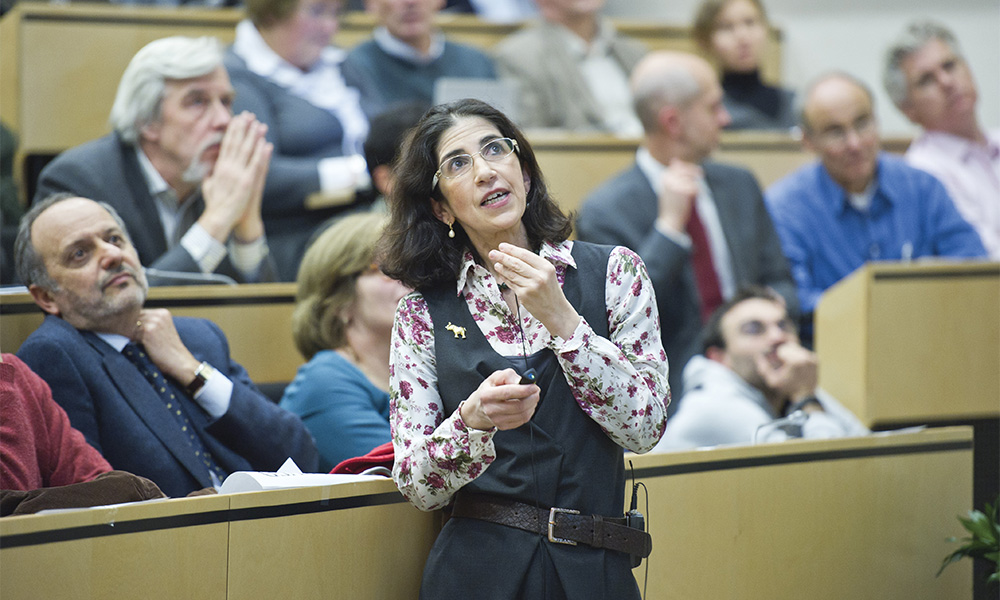 “What were you like as a child? Did you read Jules Verne and other writers of fantasy novels? Were you really curious?”

“Yes, I read Verne and Salgari, as well as Little Women, Pinocchio and Il giornalino di Gianburrasca. I played a lot with dolls and liked to mess around in the kitchen. I was a normal child, with the same interests as other children. But I was also very curious, I asked myself many questions … about everything.”

“What’s one of your purely frivolous aspects?”

“What is important for you in life now?”

“In life it is essential to be serious and honest in whatever you do; modest, because modesty prompts us to give the best of ourselves and never be satisfied with what we have achieved.”

“What can we say to young people who want to do research yet come up against the practical and economic problems that we’re all familiar with?”

“It’s true, it’s a difficult time for young people, in particular due to the economic crisis. But I always say that you should not give up your dream, and if a young person really want to do research, I can only encourage him to pursue his goals with determination, motivation, humility and enthusiasm. The path of knowledge is a long and difficult journey, littered with challenges of all kinds. But it also gives you enormous satisfaction, because there is nothing more beautiful than a life spent at the service of knowledge.”