The sailing craft ‘Aria’, constructed in 1935 in the Costaguta boat-yard of Genoa by boat builder Serena Galvani and considered among the world’s finest examples of the 8m international category, won the IV Principality of Monaco Trophy for period sailing crafts in the Venice Lagoon, Banca Generali Special Cup. The event was promoted and organised by Anna Licia Balzan, Honorary Consul to the Principality of Monaco in Venice with the support of Banca Generali as the main sponsor to the event. The Trophy is organised in collaboration with the Department of Tourism, including members of the Principality of Monaco from Milan together with the Yacht Club Venezia, the sailing club ‘il Porto di Mare’, technical expertise from Mirko Sguario (founder of Yacht Club Venezia) and under the patronage of the Italian Association of Period Sailing Crafts, (A.I.V.E) 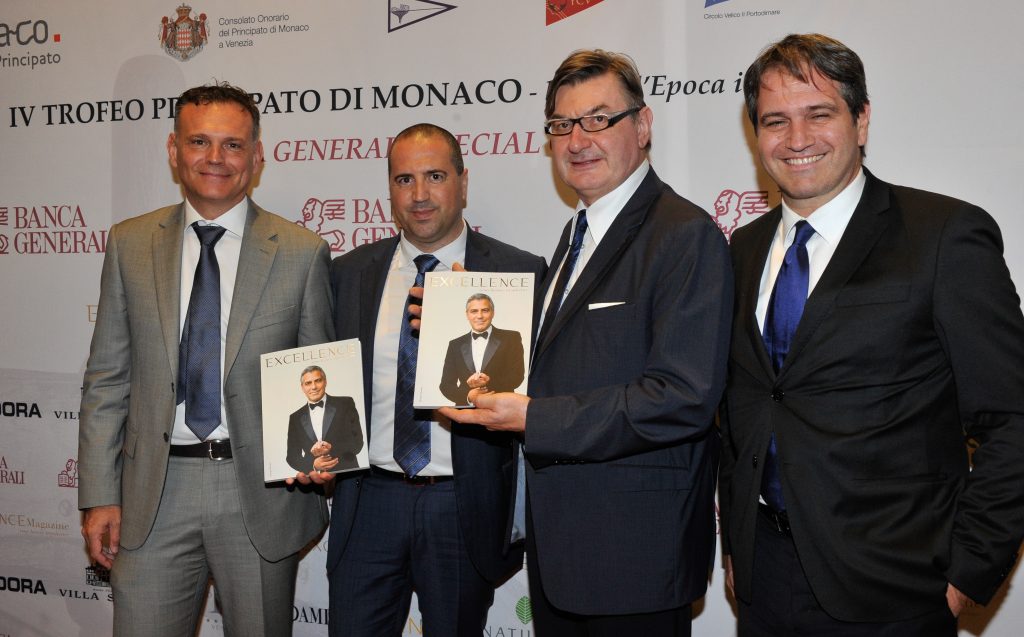 Excellence Magazine, the Official Media Partner, has been an important media support at National and International Level. The event, seeing more than thirty crafts take part and sub-divided into six categories, was created with the aim of promoting the Principality of Monaco in a sportive, touristic, cultural and economic profile. Among the period crafts, ‘Aria’ seized a dominating position once again ahead of ‘Cochy Bondhu’ with Paolo Zangheri and Finola of Daniele Metus at the helm. Victory in class 1 of the classic crafts went to ‘Palaia Tyche’ with helmsman Sebastiano Chiggiato followed close behind by Auriga di Elena Galesso and Attica di Maila Zarattini at the helm. In class 2 and staying with the classics, victory went to ‘Alna’ir III’ with skipper Fabio Mangione with close on his rudder ‘Strale’ with skipper Bruni Bandini and then ‘Bina II’ punching the waves skippered by Gianni Giovannini. First place, and holding true to the spirit of tradition, went to ‘Shaula Italia’, skippered by Manuela Aggio followed by ‘Moretto’ with Gabriele Berti at the helm. On the same podium for the category, ‘Spirit of Tradition 2’ and ‘Sciarreli’ with the victory of ‘Angelica IV’ with helmsman Carlo Luca Cazzaniga. Second place went to ‘Chica Boba II’ and third place to ‘Tiziana IV’ skippered by Leontino Battistin.

The event according to custom was framed around two different phases. An introductory phase at Ca’Sagredo on Friday evening for a cocktail dedicated to the boat-yard owners and their crew and the second in a more institutional atmosphere starting with a presentation by the Principality of Monaco in the ballroom of Ca’ Vendramin Calergi and then a welcome cocktail, followed by dinner together with boat-yard owners and selected guests. Saturday and Sunday were dedicated to a more sportive side where two regattas were held in the waters in front of the Lido shoreline and opened by a spectacular sailing display, which had set off from the Sant’Elena Marina, where the crafts had been moored, and with final destination the St. Marco Basin. The event ended with an award ceremonies held in the grand surroundings of the Sant’Elena Marina. The prizes designed by the prestigious leading brand ‘Venini’ were awarded to the first three classified of the six categories in competition. The craft, and outright winner, ‘Aria’ was honoured with the ‘Crystal Lion’, the symbol of Venice, donated specially by the Banca Generali to mark the occasion.

During the prize-giving ceremony, Mont Blanc paid tribute to Daniele Metus, builder of ‘Finola’, with a splendid ‘Timewalker’. The ‘Finola’ was designed by William Fife in 1930 and the most senior of all the crafts present at the event. Worthy winner, Serena Galvani was awarded with a piece of jewellery specially donated by Damiani in recognition of a long and passionate career as yachtswomen and boat-yard owner with her renowned craft ‘Aria’. ‘We are honoured to be a major player in an event of such excellence to sport and the City of Venice’, commented Leandro Bovo – Banca Generali’s North Eastern Area Manager and added that ‘the Lagoon has been host to the roots of our group for more than 180 years and we are proud to be ambassadors to this prestigious event’.

Consul Anna Licia Balzan was eager to point out that, ‘We are talking about the fourth edition of this trophy. It’s an event, which is continually growing where this year we have been able to count on the support of important sponsors’. First among all is our main sponsor Banca Generali, alongside prestigious names such as Alilaguna, Blitz, Damiani, Diadora, Generali Italia (Agenzia Generale di Venezia, Mestre), Hotel Ca’Sagredo, Mont Blanc, Nature’s, Venini, Villa Sandi.

The relationship between the Principality of Monaco and Sport is a ‘winning combination’, which Prince Albert II has always promoted in first person.’ The Consul went on to say that ‘promoting initiatives such as these, on a par with Culture, Tourism and the Economy, represent a unique instrument, which strengthens links between our two territories, so alike in our traditions and united by our common denominator, which is our passion for the Sea’. The Consul concluded with an appeal that ‘Venice must regain its excellence.  Such impacting events and the historical and traditional magnitude of the crafts involved, backed by our sea heritage, lead to the most natural way of achieving this’.

Mirko Sguario commented after the event, ‘I can say I’m satisfied, in as much as we have registered a considerable presence of crafts. The event was created only last year and has the potential to appear among other similar events with a long-standing tradition behind them. In order to achieve an event of this stature in the Adriatic, given its existing geographic limitations, is anything but easy. I am grateful to everyone who believed in this project. We will do our utmost to build upon this event for both our City Venice and its great historical traditions.

For this ninth edition, fifteen famous maxi yachts led by internationally renowned skippers will be ready to compete on the race course for a prestigious victory and the coveted Doge's hat, specially made this year by the historic CAM glass factory in Murano
Read more
Dolce Vita

An initiative that, in addition to welcoming the entire winemaking process, will open the Bollinger world to wine tourism
Read more