The annual Venice Hospital Challenge grew a scale larger this year with an increased fleet of 16 maxi yachts.As usual the race course was set in the magnificent, unique setting of the San Marco and Giudecca canal, with Venice’s famous PiazzaSan Marco (St Mark’s Square), its Basilica and the Palazzo Ducale as its backdrop. 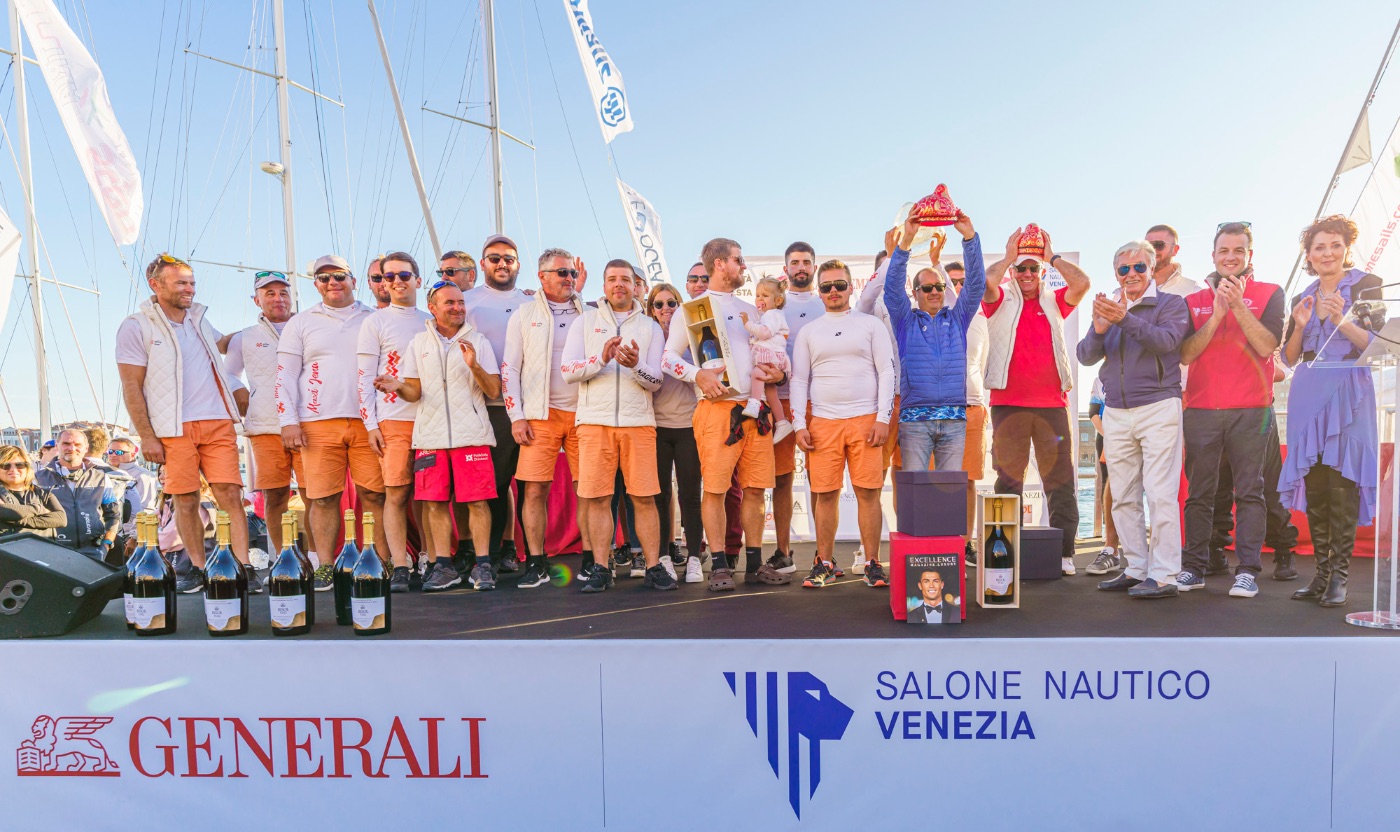 This was the eighth edition of the event, organised by the Yacht Club Venezia with the support of the International Maxi Association, theofficially-recognised body that oversees and promotes maxi yacht racing globally. The Venice Hospitality Challenge ties together maxiyacht racing with many of Venice’s world-famous hotels, such as the Gritti Palace, Cipriani and Hotel Danieli. This year it formed part of the celebrations marking the 1600th birthday of the water-born city. 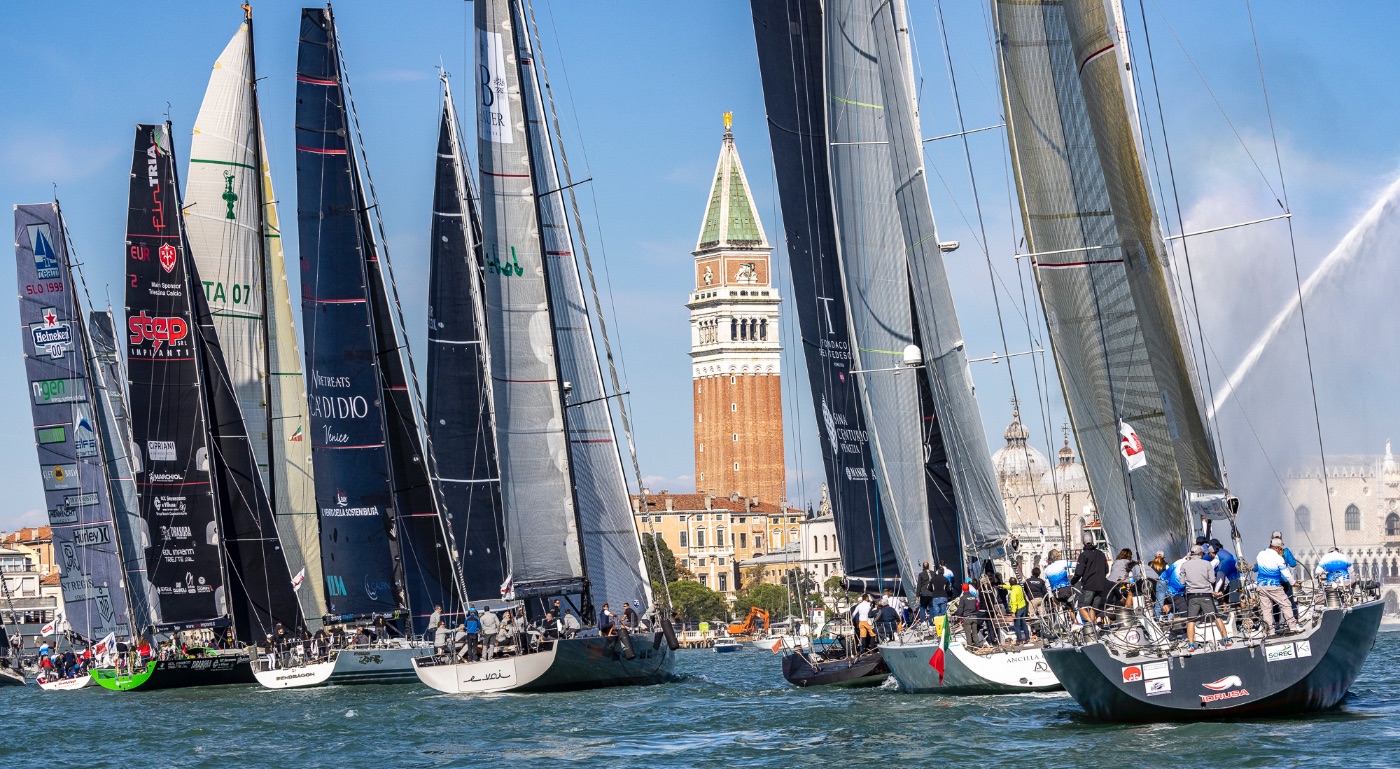 The event started with a parade of sail between Saint Elena to just off Piazza San Marco before the race itself set sail at 1355 CESTin 6-8 knots of wind from 335°. With a Race Committee led by Alfredo Ricci and assisted by Gianfranco Frizzarin, Emilia Barbieri andAlina Dix, the course took the boats from the start off Punta della Dogana at the entrance of the Canal Grande to a mark near Saint‘Elena, back to two marks off Piazza San Marco, then to an offset mark off the Guardia di Finanza before returning to the start line, on to another mark off the Hilton Hotel and from there to the finish on the congested start line, it was Maxi Jena – Sina CenturionPalace led by Slovenian skipper Milos Radonjic, that got away cleanest. From here the 80ft Andrej Justin design hung on, despitecompetition from longer potentially faster entries, such as the Furio Benussi-skippered 100ft Arca SGR, to maintain her lead to thefinish line which she crossed afer roughly one hour of racing. 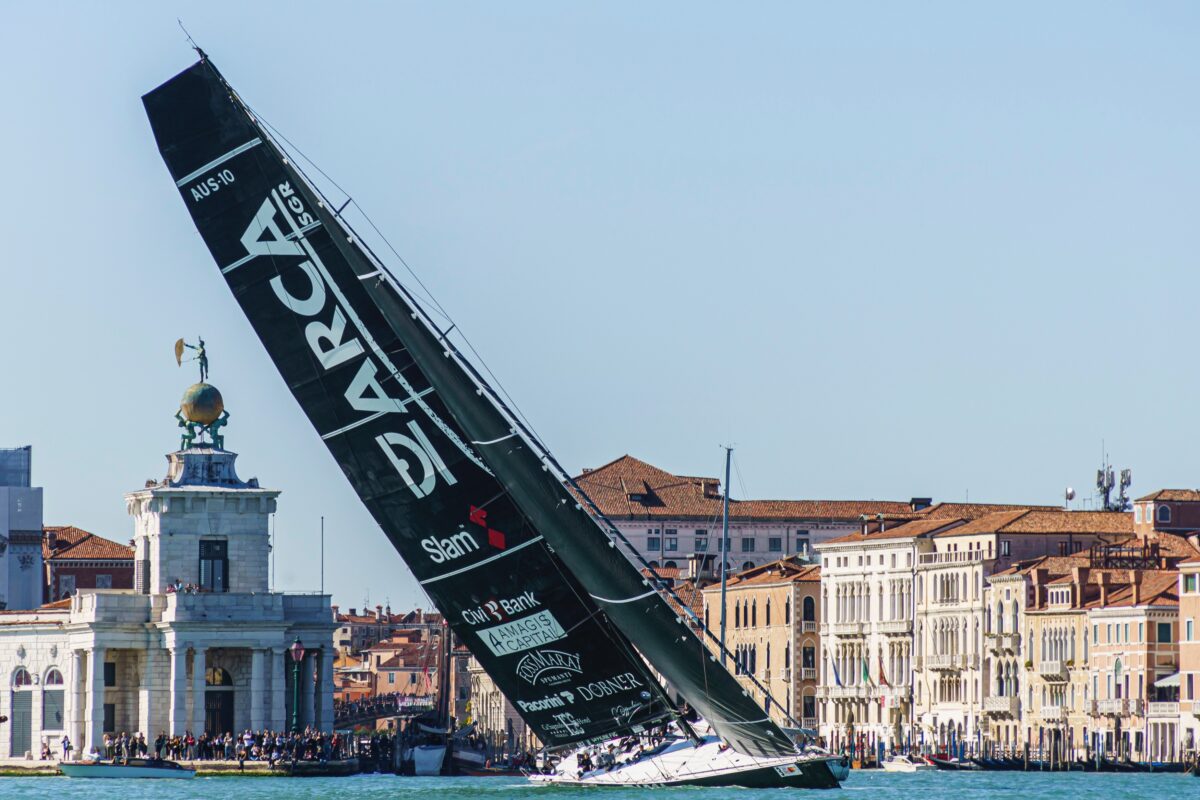 Top International Maxi Association yacht to finish was the Slovenian Reichel/Pugh 87, Way of Life (ex Morning Glory), skippered by twotime Finn Olympian Gašper Vinčec, which came home second behind Maxi Jena. Way of Life was once again representing the GrittiPalace – The Luxury Collection and the hotel’s manager, Paolo Lorenzoni, competing on board.

Vinčec admitted that they had lost out at the start.

Our approach was not perfect, because there was pressure from all the other maxis,so it was a little bit of a mess. But when we started to sail alone we slowly caught the other boats one by one. It felt romantic, as italways does in Venice!

The 16 maxis were divided into two classes with the class of smaller maxis won by the Farr 80 Anemos,skippered by Gughi Danelon. 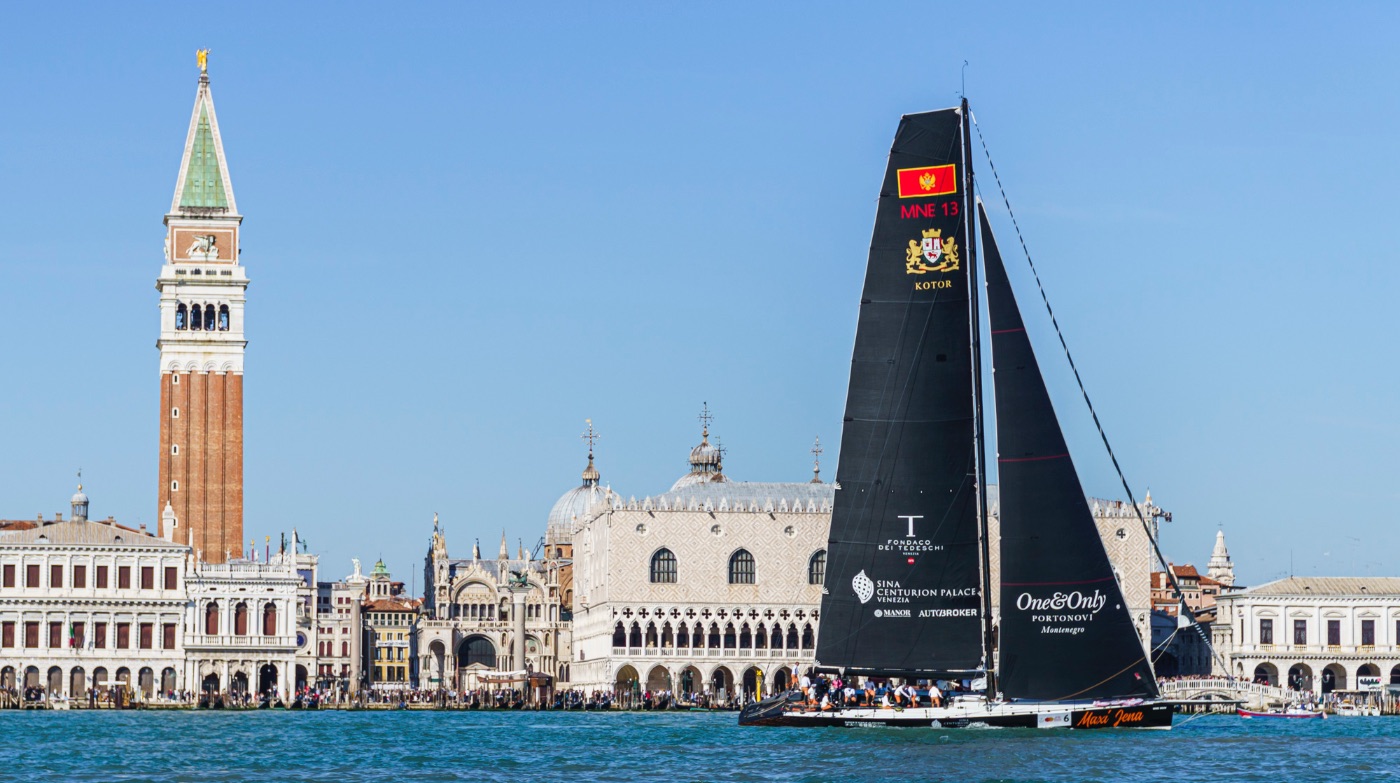 At the prizegiving held at the Zattere, President of the Yacht Club Venezia, Mirko Sguario and the Councilor for Tourism SimoneVenturini presented the winners with their trophies in the shape of the Doge’s hat, crafted specially by the historic Ars Cenedese glassfactory in Murano. 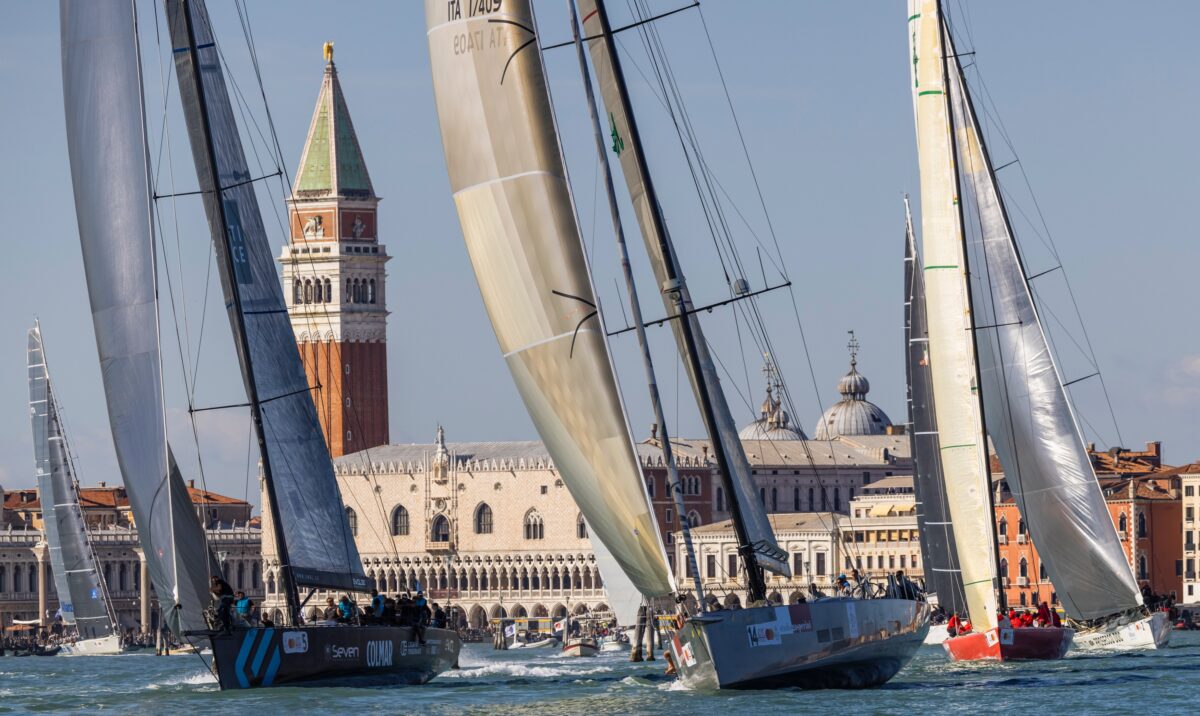 Among the 16 entries were the America’s Cup challenge Il Moro di Venezia and the 1993 Whitbread Round the World Race winnerNew Zealand Endeavor representing the City of Venice and the Francesco Morosini Military Naval School respectively.

2 Way of Life – The Gritti Palace 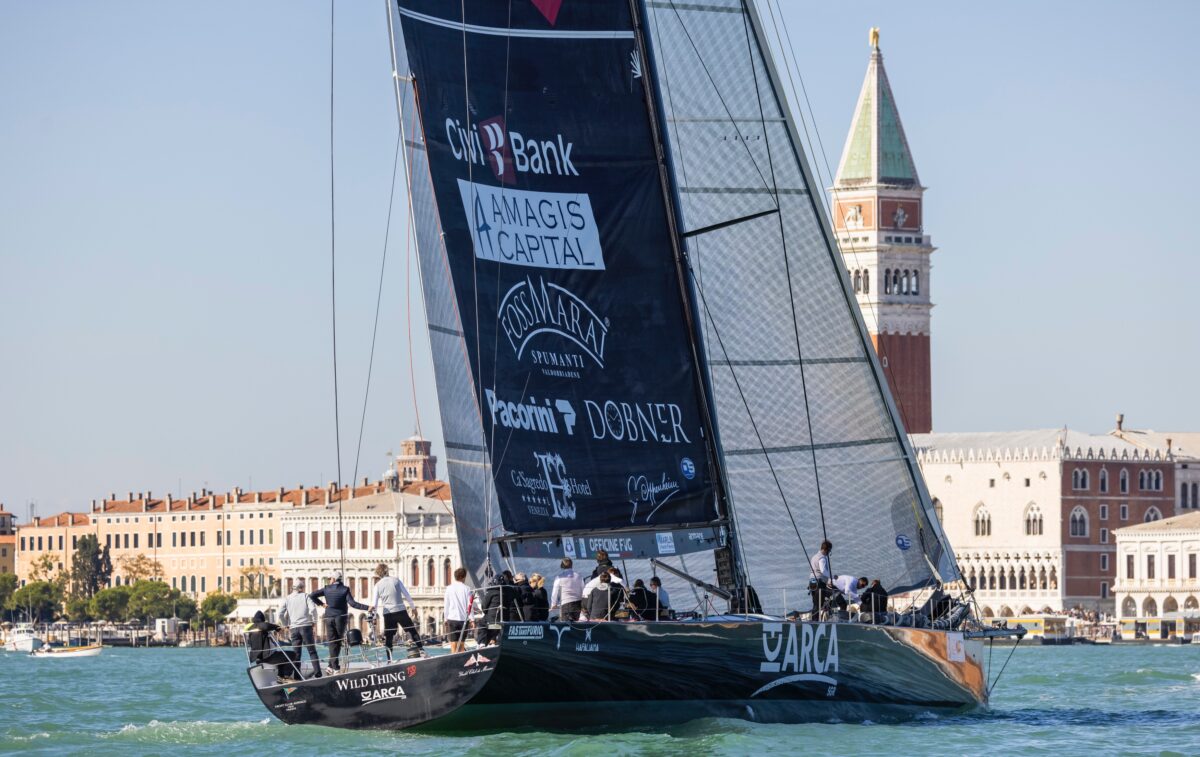