Bob Krieger, greetings to the Maestro

Italian photography has lost one of its greatest authors.

Bob Krieger, one of the most successful international portraitists, died suddenly at the age of 84 while on holiday in Santo Domingo, visiting friends.

Tireless and passionate, linked to the history of Italian fashion, Bob Krieger has interpreted a particular and always recognizable idea of ​​portrait and has represented Italian Style in the world, especially in the period from the sixties to the nineties.

Bob Krieger has told through his rigorous gaze and not prone to aesthetic complacency, the great boom of Made in Italy, and its protagonists.

His black and white photos of characters that are part of the history of our country are unforgettable: from Giorgio Armani to Indro Montanelli, from Bill Gates to Silvio Berlusconi, from Carla Fracci to Valentino, Carlo Azeglio Ciampi, Charlotte Rampling, from Miuccia Prada to Gianni Agnelli, of which he was the official portrait painter in the last years of his life.

His editorial activity was intense: for about eight years he was a correspondent for the “New York Times Magazine”, then he collaborated with “Vogue”, “Esquire” and “Harper’s Bazaar” and from 1970 to 1975, he was art director of “Bazaar Italy”.

We had the opportunity to meet him at the inauguration of the Bob Krieger exhibition – Sguardi del pensiero e dell’anima (Thoughts of the Thought and of the Soul), set up at the Orangerie of the Royal Palace of Monza in May, 2018. 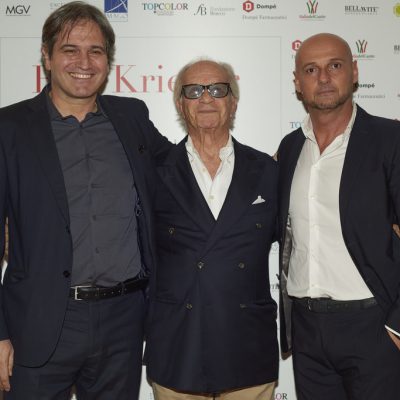 The exhibition celebrated the extraordinary Italian genius through 140 portraits of characters who, in various capacities, made Italy great.

I want to remember the great Master of the portrait who accompanied, with his beautiful photographs, the life of prominent characters.