The rebirth of Milan after 1945 clearly reveals how essential and crucial culture is to reconstruction. In August 1943, in an attempt to sway the Badoglio administration in Italy to sign the armistice, Milan was the target of carpet bombing.

The list of all damage suffered by the city is still striking and moving today: the Brera district, the Poldi Pezzoli museum, Palazzo Reale, the Duomo cathedral, the Teatro alla Scala, and the miracle of the Last Supper.

That night, a bomb hit the cloister of Santa Maria delle Grazie, shattering the refectory east side and toppling the roof. At dawn, the Dominican friars found that the only wall still standing was the one bearing the fresco, as it had been sheltered by the sandbags and wooden scaffolding put in place by the Superintendent in 1940.

What should be acknowledged are the memorable efforts of the heroes of culture that in those years, across all Italy – and for honesty, with extraordinary help from the Vatican and Pope Paul VI too – saved most of the masterpieces of Italian painting and sculpture from the Nazi bombings and plunder.

In April 1945, in the first hours of freedom, the first measures taken involved committing to providing medications, ensuring access to libraries, supporting culture, and starting to rebuild the bombed buildings, first of all the Teatro alla Scala.

And it was certainly not by chance that a manufacturer was the first to provide funds to buy penicillin, which was highly expensive back then. For twenty-seven years, Antonio Ghiringhelli worked as the Superintendent of the Teatro alla Scala, and orchestrated the reconstruction of Milan’s theatres.

La Scala reopened in record time on May 11, 1946, with an Italian music concert conducted by Arturo Toscanini: that night, Milan was reborn, and Italy was too. 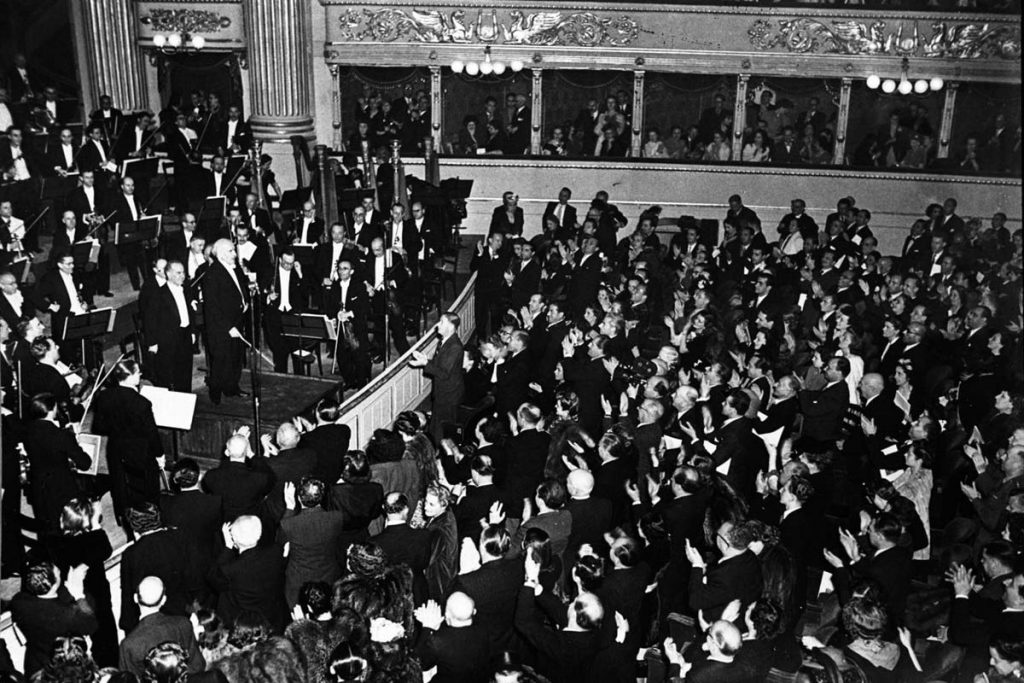 After the war, everyone was united by the effort of breathing soul into the reconstruction, by bringing cultural venues back to life, or creating new ones.

It is on culture that Milan and Italy founded their postwar economic and civil reconstruction. In 1951, the grand exhibition on Caravaggio, the one on Picasso featuring Guernica, and the show on European photography in Brera sealed what would be Milan’s place and role on the international stage.

In 2005, the President of the Italian Republic Carlo Azeglio Ciampi honored Pasquale Rotondi, who contributed to save countless works of art during war, by presenting his daughters with a gold medal for merit to culture. As he said

investing in culture, believing in culture is a necessity for us as Italians. If our museums work, if our cinema works, if our theatre works, then the whole Italian society works better, and our economy with it

It is thus from culture that Italians should restart, an effort that not only institutions will have to make, but anyone who lives and works in this world, or benefits from it. A real political commitment, meaning that it will depend on everyone. Everyone should be ready for it – and never forget that, rhetoric aside, it is from the great plagues that the Italian Renaissance bloomed.

Thanks to Alberto Meomartini, co-author with historian Andrea Villa of a book to be released in October 2020, on the women and men who saved Italy’s art from World War II