Graffiti writing is an art movement mainly born in New York between the late Seventies and the early Eighties.

Artists belonging to this movement used a vibrant, hectic painting, anarchic and technological both in its structure and tools (sprays and permanent markers). Signs and letters, shapes and “signatures” mix in these artists’ works, introducing brand-new styles and subjects.

Freed from its original illicit nature

Freed from its original illicit nature, graffiti writing is now considered as a form of contemporary art (known as “street art”) contrasting the depersonalization of large metropolitan areas.

This is how a fruitful collaboration with the concerned institutions has started, both in Italy and abroad, to promote specific projects and funding to upgrade urban degraded areas through graffiti.

This urban redevelopment partnership has been on since 2015 in Milan, and in 2020 it saw the presentation of  “Un muro che unisce” (“A wall that unites”), a 400-meter-long graffiti celebrating one of the most famous cartoon characters ever drawn by Guido Crepax, Valentina.

In the street artists’ sprayed works, Valentina wears jerseys of the Milan and Inter football clubs, and pops up at iconic locations around Milan, such as the Mudec museum, the San Siro stadium and the nearby San Cristoforo church.

Further to the previous project, a new one is now taking shape on the walls of Via Pesto. It is a 500-meter-long set of graffiti on a perimeter wall, commissioned to the same artists who worked on the “Il muro che unisce” close by: Prosa Bang, Zelig, Jin, Fosk and Poms, also known as WE RUN THE STREETS.

WE RUN THE STREETS

This time, their work will tell the feats of Diabolik, the legendary thief in tights with magnetic eyes created in 1962 by Milanese cartoonists and publishers Angela and Luciana Giussani.

In this way, Milan wishes to celebrate the Italian cartoon tradition, and the Milanese one in particular, by adding to the appeal of a district that had been considered as a run-down, unwelcoming neighborhood until a few months ago.

says Prosa Bang, the president and spokesperson of WE RUN THE STREETS.

The Municipio 6 municipality branch and the Crepax family asked us to bring Valentina’s iconic brown bob haircut to Milan’s life. A contemporary take on this character at the present day. The project has been warmly welcomed, has received lots of praise, and has given us good visibility.

Other publishers have contacted us to work on similar projects with their most famous cartoon characters, and this is how we have started to collaborate with Milanese publishers Astorina, which has been publishing Diabolik and Eva Kant’s adventures for 60 years.
The two projects will dialogue and reference each other, but I won’t say too much here…

Wait for the graffiti to be completed, and you will see!

Upgrading and decorating the wall is highly costly. Besides the spaces, which were made available by their owners, we have relied on a group of sponsors that have been supporting us: the Aviva insurance company, the Mudec museum, the Bramante consortium, New Lac, Vibrostop, and Municipio 6, which has helped us to take care of all the administrative aspects.

The Diabolik project and “Un muro che unisce” are part of a broader initiative for the upgrading of the urban and railway area around the San Cristoforo church.

In addition to the aforementioned works, the so-called “Cartoon District” will also see the creation of a park on the area where the railway tracks now are, as they will no longer be used once the San Cristoforo subway station opens. The old San Cristoforo railway station will also have a new purpose. We will not be alone on this project, and we have already got in touch with other famous Ninth Art names.

How was your association born?

We are ten friends, all from the south-west area of Milan, and all sharing a passion for graffiti writing. Even as kids, we had a dream: hosting a graffiti festival like the ones you see abroad. But to make it come true, we needed to become an association.

This is how WE RUN THE STREETS was born.

Over the years, we have taken part in festivals all around the world and represented Italy. Based on the experience we gained, we have hosted editions of Meeting Of Styles Italy A Milano and the UrbanGiants Graffiti Festival ourselves.

We managed to gather over 200 writers from over 25 countries in Trezzano sul Naviglio, a small village just outside Milan. Something like a world championship! We were so happy with it. A dream come true.

In the south-west area of Milan, where we work, we have contributed to redeveloping a school, a sports center and a railway station, we have worked on the walls of a factory, a supermarket and a road.

We regularly collaborate with Ulisse, a multi-purpose center for families, and we use our art to reach out to autistic and troubled kids. The walls along Via Schievano in Milan, which the Italian railway network managing company made available to us, are our gym, where we exercise, try new projects out, and hold classes.

Which of your projects have you identified with the most so far?

Surely the “Un muro che unisce” and the Diabolik projects show a style that is really in tune with our standards. We feel so close to pop art, and combining classical graffiti with pop art has been lot of fun. Having fun is key for us!

Do you see street art as a hobby or a job?

Making a living out of street art alone is still extremely hard. Many of us have traditional jobs and are freelancing graffiti writers at the same time. Some of us have worked with big luxury brands, such as Ray Ban or Gucci.

When the pandemic broke out, we thought that our work as a group would have to stop. We work with art, with beauty, nothing essential. We have actually realized that the pandemic has somewhat accelerated certain processes that had already started.

In Italy, we are rapidly progressing towards a new mindset. We are more and more often called for team building projects and workshops with employees from different companies, to help make the spaces of factories and organizations more livable for workers.
Working in team is so energizing and engaging.

We are a tightly knit crew. Together we can create letterings, cartoons, figurative or abstract works, and everyone is bringing their style and talent. The time we have spent together has created harmony between us and enhanced our skills. This is what makes team work so beautiful.

What brings a writer to paint?

We all started from our “tag”, an obsessively repeated signature that stands for “I want to make myself heard, I am here”.

Tags are crucial to writers as they unmistakably identify them and separate them from others.
The schools we have attended, the experiences we have lived around the world, and our group’s strength have allowed us to grow; now we are looking for quality, a brilliant idea to develop, a challenge, an intriguing project. 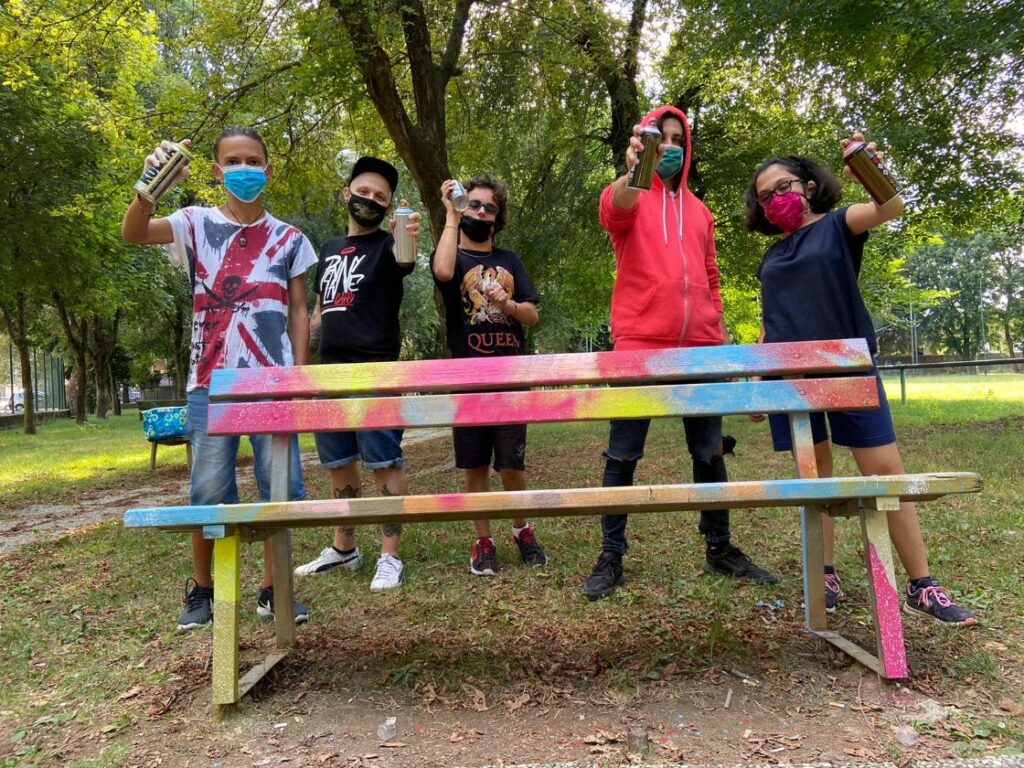 Then there is teaching: having skills, discovering a talent and be willing to share it – this is what encourages us to work at our gym in Via Schievano.

We are proud of the fact that we managed to transform something that was not understood at start, and that is sometimes opposed, into a form of art that can be helpful to the redevelopment of the districts where we were born and still live.