Wall of Sound: Rock Photography at the heart of the Langhe hills

Let’s start from the name: Wall of Sound is a musical genre developed by record producer Phil Spector at the Gold Star Studios in Los Angeles. Spector was renowned for his unconventional ideas as to arrangements. What’s the reason for this reference to Spector, and how are you unconventional?

I have always loved Spector’s elephantine productions. In 2007, the “Monfortinjazz” Festival in Monforte d’Alba commissioned us to set up an open-air exhibition. I was looking for a suitable title for the exhibition, and as I saw those large pictures on the old walls of the village, I could not help thinking of “Wall Of Sound”, meaning walls covered in sounds, even though just pictured in my photos. 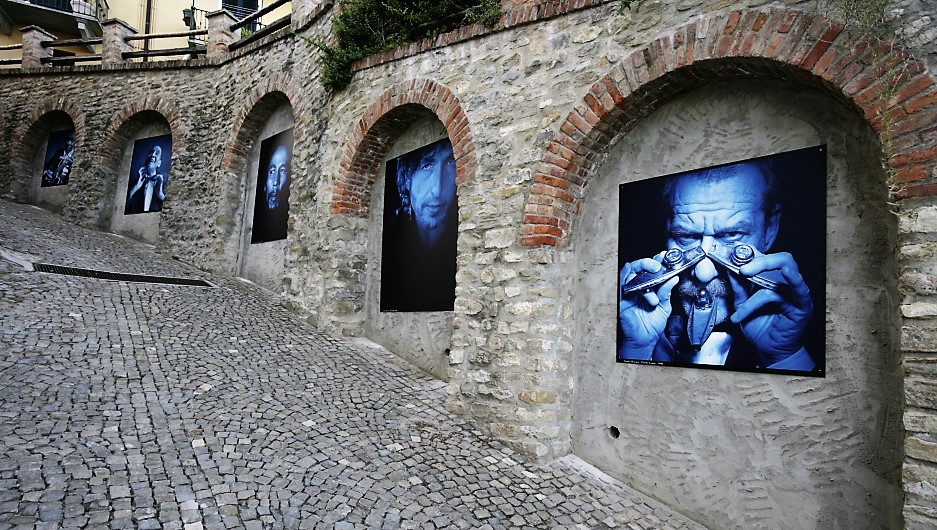 As for being unconventional, what I can say is that the artists we selected for the exhibition were the most diverse and eclectic that one could imagine: the walls hosted names like Tom Waits, Ennio Morricone, Philip Glass, Fabrizio De André, Lou Reed, Caetano Veloso, Paolo Conte, Bob Dylan, Enzo Jannacci, BB King, Frank Zappa, Kate Bush, Keith Jarrett, Joni Mitchell, Leonard Cohen, and many more. A spectacular kaleidoscope. 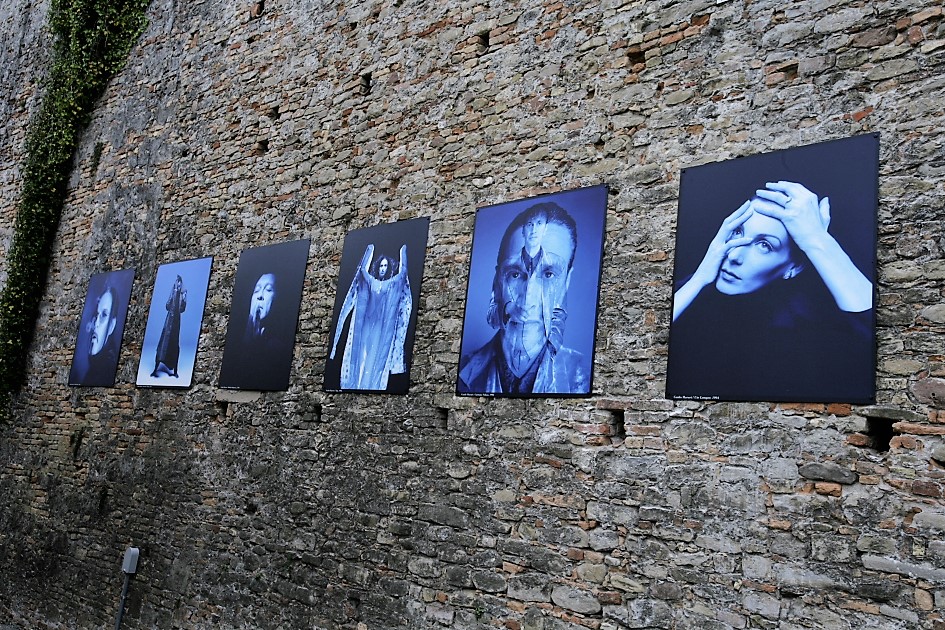 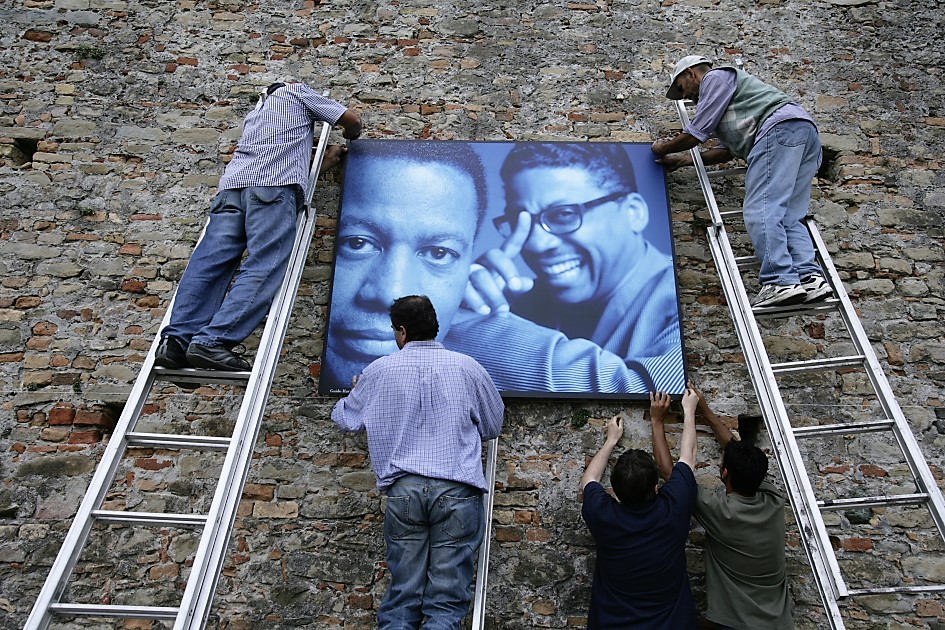 A few years later, in 2011, when we decided to open our photo gallery, “Wall Of Sound” seemed once again to be the best name for it, since it still represented our intentions.

The Langhe hills are not a usual set either. How do you pick a working space where to reflect and research art?

I had been wanting to leave Milan for many years, I needed a space where to slowly take care of the less hasty projects requiring full immersion and deep studying, like books are. Not much later, I came up with the idea to open a gallery, for the very same reasons. The quality of life is high in Alba, which attracts hundreds of thousands of tourists, not just from Italy but from all over the world. I recalled the many art galleries in the South of France, surrounded by nature, and I told myself that it would be a great challenge to launch a similar project here.

What do visitors find at Wall of Sound?

Sixty years of musical imagery in photo prints and fine art, vintage posters, and rare books. And us, first-hand witnesses, to tell them the stories behind each photo and every author, as well as the historical context of pictures that often marked the history of music. I am thinking of historical photos of the Beatles, Dylan, Rolling Stones, Bowie, Hendrix, Queen, Joni Mitchell, Fabrizio De André, Vasco Rossi, and Lucio Dalla, signed by the genre’s most representative artists. We are also into original posters, particularly those from the psychedelic era, between 1965 and 1972. And we have our books: Wall Of Sound Editions publishes not just the catalogues of our exhibits, but also valuable books in limited edition, like those dedicated to pictures of Bruce Springsteen by Frank Stefanko, to Art Kane’s jazz photos, or to my shots of Kate Bush. 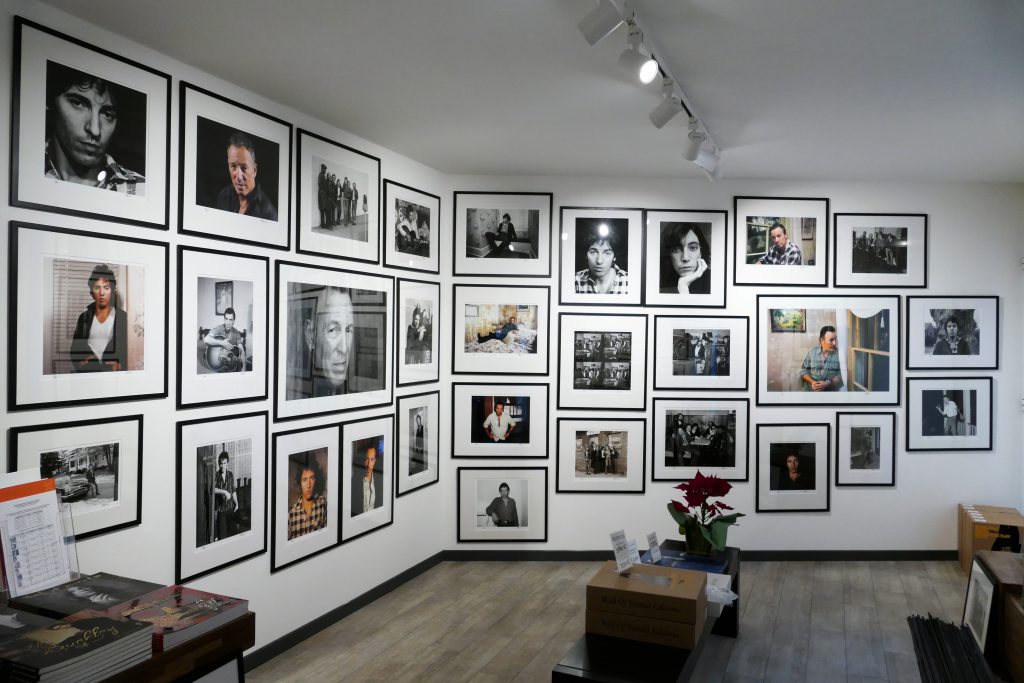 A question for Guido: you have often said that you decided to go for this job after seeing a Rolling Stone cover with John Lennon portrayed by Annie Leibovitz. She is well known for her frantic, obsessive perfectionism. She allegedly even asked Queen Elizabeth to take her crown off because she found her excessively dressed up. Your shots, however, seem to overcome aesthetics, and to make room for your own intimate representation of celebrities. I am thinking first of the picture of Tom Waits running in a sort of cape. Which of your photos are available to visitors?

That portrait of John Lennon when he had just left the Beatles – Leibovitz’s first job for Rolling Stone – was a paradigm of simplicity. She still had a reporter’s mind, and was not yet obsessed by becoming the century’s greatest portraitist. She expressed that immediacy, that intimacy created with such an important subject drawn back to his humanity, his authenticity. Here, this is what I have tried to achieve with my photos. Finding and capturing the person behind their image, and not creating icons or new legends. In order to do this, I encouraged my subjects to self-irony, and called to their likely will to get out of the box. It was the case with that photo of Waits that you mentioned, or the one of Fabrizio De André asleep on the ground, leaning against a radiator. Bursts of authenticity.

Wall of Sound showcases photos from other artists too. How do you select them, and what do your visitors expect?

When we opened the Wall Of Sound Gallery, we modeled it on some American and British galleries. There was not anything of the kind yet in Italy. The road to educate visitors about certain prices, limited and signed editions, at perceiving photography as art even though it is not a unique piece, was all uphill. In time, we have reached an international clientele, mostly on the Web, which has particularly encouraged us to pursue our editorial projects.

For what concerns selecting our artists, we reasonably take the Italian audience’s tastes into account, but from an international perspective. Our social media campaigns did help us with this.

Guido, you have also undertaken another career, which has slower rhythms than photography. I’m talking about books. Will you tell us about this?

Some twenty years ago, I fell out of love with hit-and-run portraits of celebrities. Predictable rituals, mostly addressing publishers that the advent of the Internet and television had brought to their knees. I wanted to focus on wide-scale projects that would allow me to study a specific topic or subject. Projects that, in hindsight, made me discover a new, different way of taking pictures without using any camera. This is how my books were born – four on Fabrizio De André (including the great exhibition at Palazzo Ducale in Genoa, which I curated), two on Gaber, one on Fernanda Pivano (written with her), one on Mia Martini, and a last one on Pier Paolo Pasolini.

I slowly came up with the idea to turn the gallery into a publishing house, and to independently take care of every aspect of our volumes – from graphics to printing. An enthralling experience that has given and still gives us so much satisfaction.

Has any of the many celebrities whom you have worked with ever visited you in Alba?

We had over Brian Eno, Francesco Guccini, Noa, Willie Nile, Dori Ghezzi, PFM, Shel Shapiro, and Luca Morino from Mau Mau. When Patti Smith called in, we were closed, as we were in Bologna to open an exhibition by Frank Stefanko. And naturally, we also had the photographers whose exhibitions we hosted, like Masayoshi Sukita (Bowie), Frank Stefanko (Bruce Springsteen), Gered Mankowitz (Hendrix), David Burnett (Marley), Merri Cyr (Jeff Buckley), Cesare Monti (Lucio Battisti), Luca Greguoli and Mimmo Dabbrescia (Mia Martini), and Cristina Arrigoni (The Sound of Hands).