A whole life in a vine

Tedeschi boasts strong ties with the Valpolicella area that go back almost four centuries as indicated by historical documents dating back to the seventeenth century.

Since 1630 Tedeschi has believed in the considerable potential of its wine production and has reinterpreted it in a modern key. It has adopted the most innovative methods in the wine cellar and in the vineyards, always striving to create a wine that can best express the characteristics of this magnificent area.

As a result, Tedeschi produces powerful, elegant wines with great personality and a strong typical character. Today Tedeschi is one of the leading companies in the Valpolicella and contributes to the knowledge of the wines of the province of Verona throughout the world.

We are convinced that each of our wines has to be born out of our territory and history. The authentic character of our wines is the result of 400 years of great passion and in-depth research

The Tedeschi family
A passion passed down through generations, today Renzo, the innovative father, runs the estate together with his children Antonietta, Sabrina and Riccardo, thus confirming that family is the key element of their success. They continue together the interpretation of terroir that their ancestors began long ago. 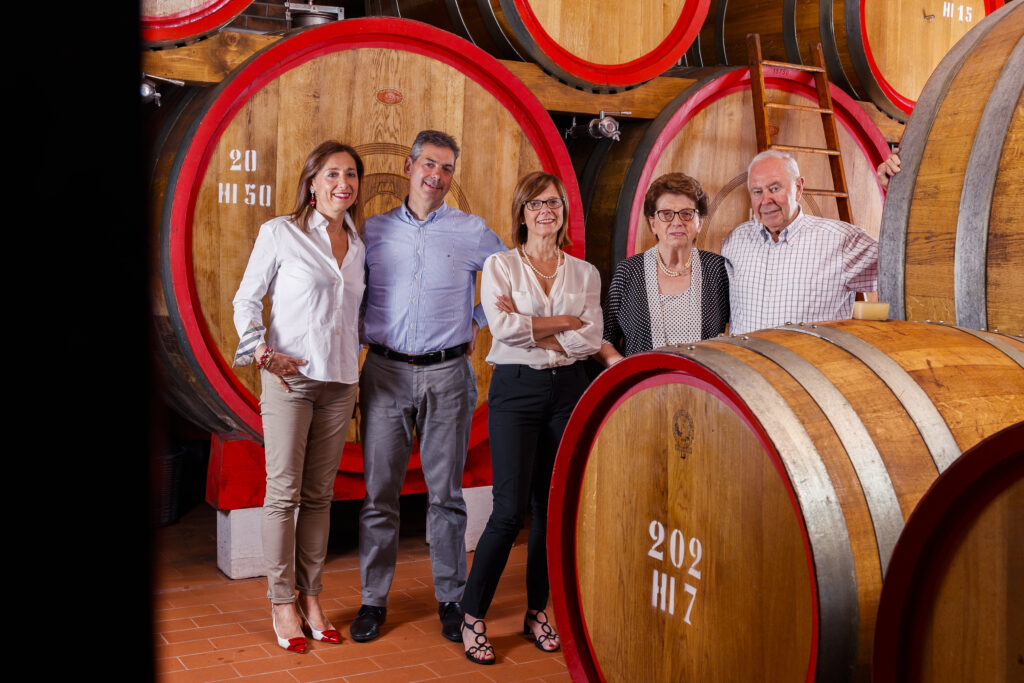 The Tedeschi family has always sought to produce terroir wines, i.e. wines that are only produced with grapes from the hills

The Tedeschi’s style
The Tedeschi family firmly believes that each harvest can only unfold its potential if you listen to the different needs and respect the disposition and the rhythm of the land. The peculiarities of the growing season thus become an integral part of the produced wine.
A forward-thinking style by nature, since the early 60s, when Lorenzo Tedeschi had the fortunate idea of vinifying the grapes from the Monte Olmi vineyard separately, thus creating one of the very first single-vineyard wines in Valpolicella. Today Monte Olmi is the symbol of the estate and its territory.

The last twenty years have seen continuous investments in the vineyards and the wine cellar to obtain increasingly harmonious and elegant wines. In 1995 a modern drying loft was built in Pedemonte to control the humidity of the environment as well as regulate ventilation. In this way, we are able to ensure the integrity of the grapes during the entire drying period. The entire vinification area has also been renovated and expanded so that is possible to optimize the fermentation process during the harvest, which also includes the careful selection of the grape varieties from the various plots.

New Slavonian oak barrels were purchased with a capacity ranging from 1000 to 5000 liters that allow for a better ageing process.

To make great wines like Amarone you need commitment and patience: patience that has always gone hand in hand with the passion for Valpolicella; commitment means care and attention to details

The vineyards
The Tedeschi family produces Valpolicella, Amarone, Recioto. They have also been able to enhance the value of local varieties such as Corvina, Corvinone, Rondinella and even less known grapes such as Oseleta, Dindarella, Negrara, Rossignola and Forselina that play a role of paramount importance. 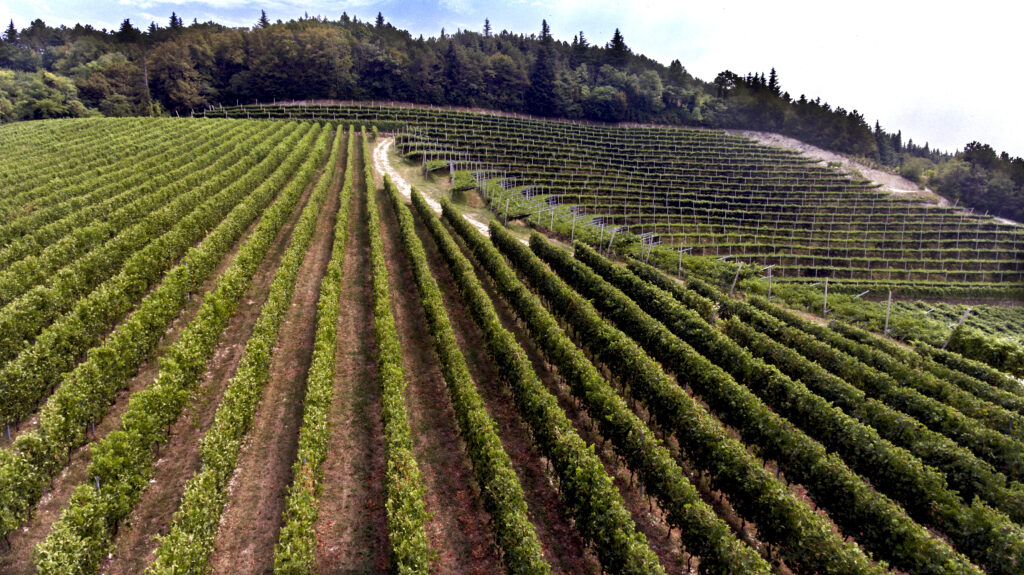 The vineyard has an elevation of 130 m above sea level and faces south-west. As the vineyard is considerably steep, over the years it was necessary to erect dry stone walls, built from local stone. Today the walls have been restored. The vine training system used on the terraces is the typical Veronese pergola.

Vineyard of La Fabriseria
At the beginning of the 2000s, the Tedeschi family planted the vineyard of La Fabriseria that covers 7 hectares and is situated in Le Pontare (between the municipalities of Sant’Ambrogio di Valpolicella and Fumane). The vineyard has an average elevation of 450 m above sea level and faces south/south-east. The vine training system used is guyot.

Tenuta Maternigo
Maternigo means “house of the mother” because of the past existence of a host house for pregnant girls on the land. The vineyard was bought in 2006 and represents the Tedeschi family’s newest challenge. The estate covers 84 hectares (31 of which are planted with vines today) and lies between the municipalities of Tregnago and Mezzane di Sotto, in the DOC area. 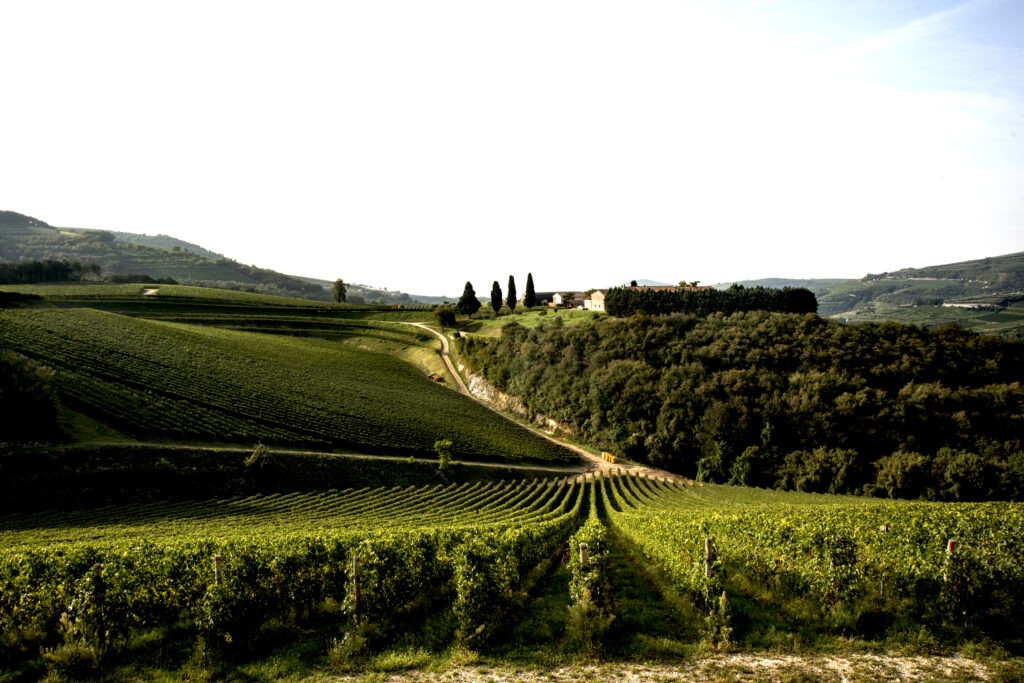 Thanks to its different exposures and an altitude between 300 and 400 m above sea level, the new vineyard increases a production that is well known and appreciated throughout the world. This production consistently fits with our choice of only producing wines rooted in this territory.

Quality wine is made in the vineyard. The vineyard is the prime reference for winegrowers. They have to take care of it, follow its rhythm, protect it and respect it

Sustainable viticulture
The Tedeschi wine growing methods have always been based on a mixture of tradition and modern techniques, both of which are founded on natural principles. In 2010 the Tedeschi family started a zoning and characterization program that regarded the vineyards of the Maternigo estate and the Classical area. Zoning (the pedologiccal study of the vineyard) has been highlighted for years as the point of departure for high quality wine growing. This type of work is demanding and strenuous, but yields important and permanent results.

Research has shown that despite homogeneity of land composition, vines do not always respond in exactly the same manner. For this reason, Riccardo Tedeschi has also undertaken the meticulous task of characterization that permits the analysis of the land and the measurement of the manner in which each plant expresses itself from a vegetative point of view. Once differences have been measured, it is then possible to intervene in a targeted and detailed manner in order to obtain vegetative development that is both uniform and productive across the entire vineyard that also results in a positive effect on the quality of the wine.

Results from zoning have revealed different areas of the terrain that have unique soil characteristics related to orientation, land, organic substrate and drainage. The data have permitted the initiation of a series of interventions targeted to the different zones. For
example, cover cropping to strengthen the natural defenses of the vineyard, creating a plan for the control of water stress, increasing the amount of organic carbon content, and enriching the terrain by sowing specific plants and spreading organic fertilizers.

In addition, instruments have been set up to monitor for the presence of pathogenic attack. These instruments, which are specific sensors in the shape of a grape leaf, measure humidity levels and leaf wetness that permit prompt and precise intervention. The Tedeschi family has also instituted a concerted attack against the grapevine moth and botrytis using targeted bacteria as well as the implementation of natural extracts to combat blight and oidium.

Experimentation has also included growing methods. The objective is to improve vine crown health and sun exposure, important factors for the indigenous varieties Corvina and Corvinone, which suffer from leaf burning.

Continuous research aims to bring the company to be completely sustainable in agronomic management and in the wine production chain and is a clear sign of how the Tedeschi family is strongly tied to tradition and, at the same time, projected towards the future. Today the company is certified according to Biodiversity Friend and Equalitas standards.

We have discovered the characteristics of all our vines, and now know how to manage them